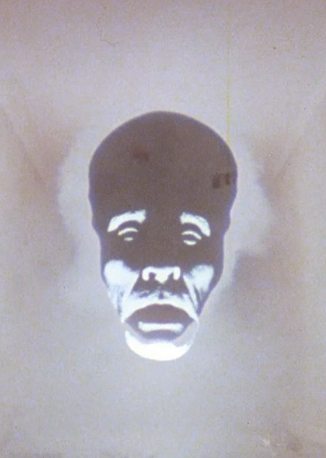 I am the Supreme Being, I’m not entirely dim.

The Supreme Being, AKA Sean McPharlin, was saved from certain death, adopted and raised by a family of tree frogs (Boophis brachychir) when the chartered sloop carrying his archaeologist parents was attacked and sunk off the southern coast of Madagascar by Botswanan pirates intent on recovering the sacred Head of Mtubuntong, stolen, they believed, by a pair of winged, white devils nine feet tall, whose descriptions, in their haste and unfamiliarity with judging distances (and, one must suppose, heights) on the open sea (Botswana being landlocked), they swore matched those of his parents, neither of whom was taller than 5’11”, and one of whom (his mother) was eight months and three weeks pregnant with the as yet unborn Sean.

Sean’s father was mortally wounded by a poisoned dart in the ensuing attack (the poison, ironically, tree frog [Leptopelis vermiculatis] based). His mother, a one-time Olympic bronze medalist in the breaststroke (Tokyo, 1964, the first and only medal ever won for her native Bolivia, prior to the so-called “titi monkey scandal,” which resulted in the Soviets claiming the bronze for themselves) swam to shore from the burning wreckage where, beneath the unforgiving eyes of Mbano, the pirate captain, she went into labor and, seventeen hours later, gave birth to a son.

But like her briefly held bronze medal, so too was her son stripped from her arms, for Mbano believed she had swallowed the Head of Mtubuntong, worked on it a nefarious spell in the depths of her ensorceled stomach, and spat it out in the form of a living, breathing human child. The strain, the shock, it was all too much–Sean’s mother would not live to see another sunrise.

Deep within the forest, Mbano, two of his most trusted lieutenants, and a sorcerer prepared the child for the Rites of Transformation, a ceremony that no matter its success in reforming the golden Head would result in the gruesome vivisection of the still unchristened baby boy. Their cruel, scarred faces hauntingly lit by blood red flames, the pirates danced their enmaddened dances, ululated their wicked ululations, and with cutlasses raised high, pounced upon the child.

This is where our story takes a peculiar turn.

Twenty seven years earlier, a storm had tossed a small ship into a rocky cove on the southern tip of Madagascar. One young man survived, an Irishman known to history only as Finn. Finn had abandoned the world of men for the sea; he had hoped to find Atlantis, to plunge into the depths and live forever in a coral house with a mermaid wife. Finding himself trapped on land, he did the next best thing: he befriended the tree frogs, and in time became their king.

And it was this king, this Finn, and his tree frog army who fell upon the pirates and saved the child. Finn named the boy Sean, after his half-brother, whose mother, a selkie, took him with her when she’d found her skin and returned to the sea, and McPharlin, for his great-great-great-great-grandfather, a man whose much-storied moustache is to this day spoken of reverently in taverns across Ireland.

Sean’s childhood was the same as any boy raised by tree frogs and an Irish King; he did little but watch movies. The frogs were especially fond of John Carpenter and John Landis, such that images from The Thing and An American Werewolf In London still haunt Sean’s dreams.

Corrupted as he was by movies, Sean writes screenplays–fantastic, beautiful screenplays–and he wants to sell them to you. Contact him immediately.

With Ted Sullivan and Paul Sullivan he wrote I’ll Believe You, a movie starring funny actors you like and why haven’t you bought a copy already? Come on, people!

In short (ha!), Sean has spent the better part of his existence in thrall to flickering images. Digitally projected movies make him sad, and The Castro Theatre in San Francisco is his church.

One response on “The Supreme Being”