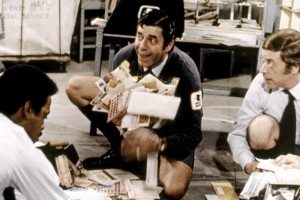 What is the worst film ever made?

That is a question that people who contribute to sites like this get often. Various movies have held that title over the years for me, usually with the rankings dependent on how recently I saw it. Extremely Loud and Incredibly Close, Jaws the Revenge and any film made by Michael Bay have all made my shortlist.

Others might include the likes of Manos the Hands of Fate, Birdemic or The Room in the conversation. But they were not made by experienced filmmakers and I submit that their existence has made all of our lives better.

However, I believe I have found the great white whale of bad films. It is so staggeringly incompetent that it makes you long for the narrative cohesion of Highlander 2: The Quickening. It is crass and cynical with racist scenes and blatant product placement. The style is so all over the map, that you would assume it was made by a first time director instead of being the 11th movie in a successful career behind the camera.

And by the end, you will hate the world-famous star and auteur of the film to the point of a white-hot rage.

It is the Jerry Lewis film Hardly Working, starring Mr. Lewis himself.

I had first heard of the 1981 comedy in a collection of Roger Ebert reviews sometime around 1986 or 1987. He slammed the film as only the late Ebert could. I gave it little thought until it became a subject for an episode of Proudly Resents, a cult movie podcast that should be a staple in every film lover’s Smartphone. Host Adam Spiegelman broke down the movie and it sounded dreadful enough to watch. Besides, the entire movie exists for free on YouTube, so why not check it out to enjoy the episode?

I must have resembled Nic Cage squirming while watching the snuff film in 8MM during the duration of Hardly Working.

Now keep in mind, I can’t stand Jerry Lewis. I never found him to be funny. I felt Dean Martin towered over Jerry in terms of comedic ability. Even Jerry in his prime, with The Bellboy and the original Nutty Professor never impressed me. I think the fact that a great performance was coaxed out of Jerry in the masterpiece King of Comedy could be Martin Scorsese’s crowning achievement.

Jerry had a string of hit comedies all throughout the 1960’s before he went for Oscar broke in 1972 with the infamous and never seen “clown in a concentration camp” drama The Day the Clown Cried. That film, which Jerry wrote, directed and starred in, was never released. Jerry did not even appear in another movie for the remainder of the 1970’s — only his telethon kept him in the public eye.

As the 1980s emerged and a new generation of comedy stars eclipsed him, Jerry decided to make his comeback. He wrote the script of what would become Hardly Working with TV writer Michael Janover and found funding to shoot it in Florida. Jerry was going to reclaim his spot as a comedy giant. 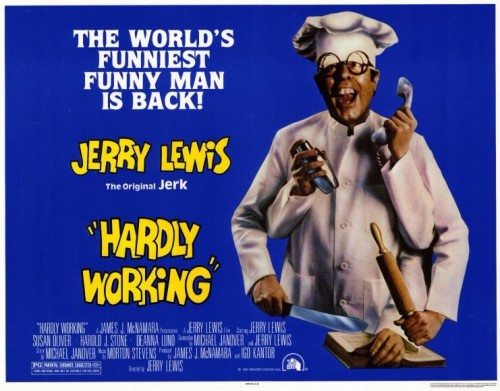 What is French for “desperate”?

The one sheet declared that “The World’s Funniest Funny Man Is Back!” Quite the boast. More telling, however, is the fact that just under his name runs the subtitle “The Original Jerk.” Here Jerry Lewis was trying to take the wind out of Steve Martin’s sails, who played a goofy inept character to perfection in 1979’s The Jerk. Unlike Jerry, Steve Martin consistently makes me laugh.

Hardly Working has one of the strangest opening sequences I have ever seen. Before the movie begins, there is a montage of Jerry Lewis highlights from his earlier films. The music is from the celebrated (but yawn-inducing to this author) “typewriter bit” from Who’s Minding the Store? Clearly there was a need to remind the audience who Jerry was and why he is funny.

He isn’t but let’s move on.

The opening credit sequence revolves around a circus big top being raised — along with a few metaphoric red flags. Jerry Lewis is in a circus? This is going to be rough. Jerry’s name appears in the opening titles 4 times, in case there is any doubt who was responsible.

Jerry gets introduced as a clown in the circus and we see his sister, niece, and nephew in the crowd, dutifully cheering him on. He does a routine  that can best be described as “sad clown unpacks.” The only funny parts are the cut-aways to the other clowns watching him as if to say “THIS is the clown that even the other clowns love and admire.” It is painful and tedious, as any scene involving Jerry Lewis as a clown would be. Billy Barty is in the scene with him. He has no lines.

But then the film has the first of its wild mood swings. The manager of the circus gives a passionate and maudlin speech about the circus closing. While I don’t wish unemployment on anyone, if what we saw was any indication of the quality of the show, closing it might not be a bad idea. Jerry is silent in the scene, putting on his saddest clown face. His personal parallel is obvious. He is literally a clown who is crying about having the project he loved pulled away from him, much like his Concentration Camp clown movie. (What a strange sentence to type.)

He moves in with his sister, who has a nice house in Florida, two kids, and a husband who doesn’t want a clown who looks like Jerry Lewis freeloading in his house. While the brother-in-law is supposed to be a bad guy, we totally sympathize with him.

When Jerry arrives, he is not dressed like an out of work clown. He is dressed like Jerry Lewis. He is wearing a nice sweater with slacks. His hair is slicked back. He is wearing rings on his fingers. If you hadn’t read the credits, you would assume Jerry picked up this gig for the money and refused to do a costume change. But he is the writer and director of the film. He just didn’t care.

The rest of the film defies belief. From scene to scene and sometimes within the scene, the tone changes wildly. One scene Jerry trades patter with cast members like he is hosting a telethon. The next scene he gives a morbid speech about wanting to amount to something. One moment he acts like he is cleverer than anyone in the room. The next he is doing his best clumsy bit and being incapable of the most basic human task.

The film devolves into a series of scenes where Jerry’s character tries to find a job. A sequence at a gas station looks eerily similar to The Jerk, complete with two sequences involving falling oil cans. While Steve Martin’s “he hates these cans” scene remains one of my favorites in any comedy, Jerry must have seen it and thought the joke was simply cans falling over. The original Jerk indeed.

The pacing in the scenes are so choppy that you almost expect to see a slate come into shot. And the physical comedy is cheap and never pays off while; instead I curl into a ball and ponder the emptiness of the human experience. 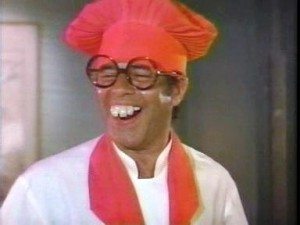 Jerry finds out he has a job via a phone call. Cut to him at a Japanese restaurant where, wearing fake Asian eyes and buck teeth, he wildly chops food at a Benihana type place. That was a big show stopping sequence. Jerry had so much confidence in the hilarious Asian cook bit that it became the poster.

Even Mickey Rooney would have been offended by it. And there is no pay off to it It just ends.

In another scene, Jerry is working as a bartender at a strip club. Until that point, this felt like a potentially family friendly film. But Jerry gropes the legs of one of the strippers as this out of work clown is evidently sex-obsessed.

Again, there is no connection from this scene to any other. 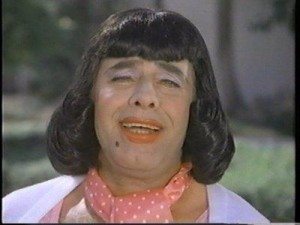 One scene Jerry has a conversation with an unattractive heavy woman, played by Jerry in drag. The next there is a product placement sequence involving the Budweiser Clydesdales. Another scene revolves around a Dunkin’ Donuts box. Then a lame Saturday Night Fever parody pops up out of nowhere, a year after it was done well in Airplane (and several years after disco’s death.)

Jerry’s clown finds work in the post office. He is clumsy at first but then does well. He falls in love with his supervisor’s daughter, who is young and beautiful with a child and so, naturally, falls for a 50-something former clown.

By the way, the supervisor is played by classic “that guy” Harold J. Stone, who played one of the gangsters in the MST3000 classic Mitchell, which was a better movie that Hardly Working.
Just as the film seemed to be moving to a conclusion, it manages one more mood swing. Jerry inexplicably rebels against his boss and his new-found love and becomes a clown again, this time delivering the mail. And for some reason the sight of a clown mail man draws a crowd of people who march with him down the street instead of recoiling in horror

Jerry goes off looking for a new circus and the film ends with some outtakes over the credits. As a metaphor for Jerry’s career post Clown Who Cried, he no doubt was saying “I can go look for a new career or reclaim my place as the great American clown.”

The result is an incompetently made, hateful ego trip devoid of humor, basic filmmaking skills, or taste. It’s made not by an eager new comer but by former major star with directing experience.

The film is astonishing. The film is staggering. I will say it. Hardly Working is the worst film I have ever seen.

8 responses on “Jerry Lewis’s Hardly Working: The Worst Movie I Have Ever Seen”