Unless you live in a hole or with Ted Kaczynski or something, you’ve seen the K-Pop video that’s gone super-meme: Gangnam Style by PSY. This is the most ‘liked’ video in the history of YouTube.

Is it amazingly good? Well, no. Not really. But it certainly is engaging in its balls-out, visual, mid-MTV ricockulousness. And everyone and their grandma has seen it, remade it, riffed on it, and started humming it unconsciously while waiting for their lab results. (Bad news, I’m afraid. You have a brain cloud.)

K-Pop, of course, is Korean. Korean is good. That’s what I’m here to tell you. Let Gangnam Style be your entreé to the most-excellent cinematic offerings that hail from this oft-overlooked peninsula. Korea is where some of the most interesting filmmakers alive today are working.

If you don’t know Jong about Korean films, here are three to get you started. Watch them. Love them. Do stupid dance moves about them. This is your chance. 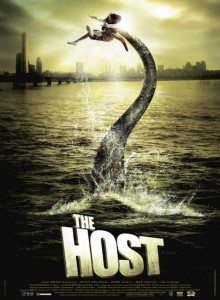 Joon-ho Bong’s 2006 monster movie tells you, practically from the start, that it’s not going to be your standard screamer. How does it do this? By showing you the monster right away.

See? There? Hanging from the bridge over the Han River in the middle of Seoul? It’s some sort of amphibious gribbley thing! Let’s throw cans at it! Wait. On second thought… bad idea.

While The Host is a monster movie, it’s not a horror film. It’s funny and poignant and political and fairly demented. This monster comes to exist how? It’s America’s fault of course! Shouldn’t have dumped all that formaldehyde down the drain… (this really happened in 2000. Sorry Korea.).

Joon-ho Bong’s film has depth too it, as well. It takes aim at American military presumption, inept Korean bureaucracy, and the local youth’s quickness to take to the streets in protest. Also, you learn that it’s rude to eat some of the legs off a roast squid if you’re selling them. This is good etiquette to be aware of if you’re ever planning on running a snack kiosk in Seoul. 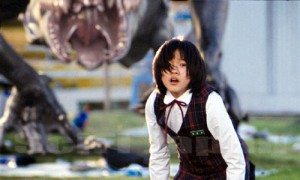 Won’t you think of the children?

The Host is novel and surprising and just plain different. The characters are all quirky enough to impress Wes Anderson but they aren’t nearly as irritating as Owen Wilson. In the end, you believe in them. And you feel bad when they get eaten.

I wonder who survives?

If you like The Host, Joon-ho Bong made another fantastic film called Mother in 2009. That one features a drop dead performance by Hye-ja Kim as a mother set on proving her intellectually disabled son’s innocence. Like The Host, very little ends up as you expect. I almost recommended that one instead of The Host, that’s how good it is. Joon-ho Bong’s earlier film Memories of Murder (2003) is also widely regarded as a gem of Korean cinema. 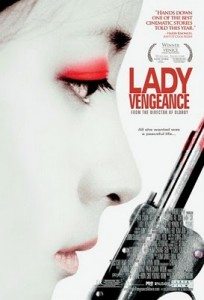 If you’ve seen one Korean film, chances are it’s Oldboy, the second film in director Park Chan-wook’s Vengeance Trilogy. Oldboy was such a (deservedly) big success here that Spike Lee is remaking it. While I like Oldboy quite a bit, I actually think the third film in the series is the best: Sympathy for Lady Vengeance.

If you’re really serious about getting Gangnam style, I suggest watching all three of these films in order (the first is Sympathy for Mr. Vengeance). If you want to jump around, you won’t have any problems, though; the films are connected thematically but not by plot or character. I just think they get better as the trilogy unfolds and I like to save the best for last.

Sympathy for Lady Vengeance tells the story of Lee Geum-ja, a young woman who goes to prison for the murder of a schoolboy. Thing is, she didn’t do it. She took the fall for the real murderer, because he held her baby captive and forced her to falsely confess. When Lee Geum-ja gets out, it’s payback time—but not like in some stupid Jason Statham actioner where everyone rips off their shirts and has fisticuffs in a vat of motor oil. This is revenge served ice cold with raw nerve violence. It’s color and pain and beating hearts and red eyeshadow.

The film, despite its grim subject matter, is beautiful. Visually and also emotionally. There’s an expression lead actress Yeong-ae Lee makes towards the end, that you will never forget. It is perfectly complex. 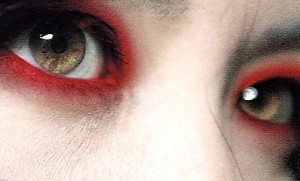 Can you live with what you do, justified or not? Is your vengeance righteous? Park Chan-wook lays it all out like a nice white slice of cake. Have a bite.

Speaking of which, Chan-wook’s first English language film, about vampires, is on its way to theaters—Stoker. If you want more, definitely check out the other entries in his Vengeance Trilogy. Thirst (2009), a later film of his, I can’t really recommend. It’s interesting but a little too weird and too long. I’ve heard good things about his J.S.A.: Joint Security Area  (2000) but haven’t had a chance to see it yet. 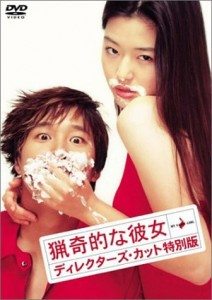 Not all Korean films focus on monsters and murder. There’s comedy and romance as well! While it tends to be a little melodramatic for my tastes, My Sassy Girl represents a high point.

The story is based on a series of blog posts (later novelized) that describe a supposed real-life encounter and the seriously odd romance that followed. While the English title may be “sassy,” the real translation is “bizarre”—and that’s what this is.

To start with, our hero, the romantically unlucky Gyeon-woo only meets “the Girl” because she pukes all over some unfortunate subway passenger—who then assumes Gyeon-woo is her boyfriend and demands he care for her. The hijinks escalate, veering well into the ridiculous, and then they flop over into some melodrama before the solid close.

Now, I’m not the biggest My Sassy Girl fan, but this film spawned remakes in America, Japan, and China, plus two in India. It gave Titanic a run for its money in Asia. In Asia! Titanic! So yeah. It was pretty damn popular. The biggest grossing Korean comedy of all time. 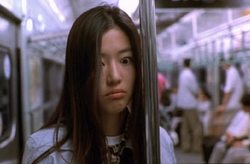 Jeon Ji-hyun is fairly excellent (and infuriatingly lovable) as the Girl (who is never named). If you’re looking for something Korean which might actually go over well on a date, this is the ticket. If you can find it. Oh yeah. Damn. This one isn’t so easy to get a hold of. Netflix is no go and most video stores will try to pawn you off with the awful Elisha Cuthbert remake. Do NOT allow that to happen. Maybe if we all request it from Netflix they’ll get a copy?

Otherwise, you might have to just buy it. Because you’re Gangnam style.