Do you know that feeling you get, when you’re peering in on a strange and mysterious culture of which you have little understanding, and then the police come and throw you out of the pet store and tell you you’re not welcome there any more?

Or maybe you’ll relate more to an analogy about that time in high school, when you were trying your damnedest to get into the math club, but the members were all, “quick, what’s the cube root of an imaginary factor of ‘x’ if x is less than the number of pants you’re wearing but greater than the sum of its parts per million?”

Yeah. I hate those fuckers in the math club, too. I had to make do with being a cheerleader and scoring the winning touchdown in the big game against the drama geeks. San Dimas High Football Rules! Or something. High school was an awfully long time ago.

But forget all that. Closed cultures are fascinating simply because they’re closed. The lure of the forbidden! Yes, we want to know what goes on in locals-only communities so durn bad it makes our spleens ache. That’s why today’s Mind Control Double Feature is taking us behind the curtain into the mysterious world of you’re not welcome here. 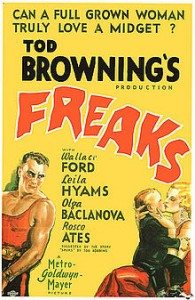 If you’ve never seen Tod Browning’s film Freaks—because you thought it was going to be disturbing, or too scary, or because you thought them codgers in 1932 didn’t know entertainment from a hill of beans (which, I’ll point out, a hill of beans would actually be pretty entertaining)—now’s your chance. Freaks is one of those films that defies your expectations and makes you cackle like the Chicken Lady.

If you’ve heard of this film, what you’ve heard is probably that it’s about circus freaks of horrific and obscene appearance. That it’s a shocking display and exploitative. All that’s only half true. It is about circus freaks of extreme appearance. It is not exploitative, though, because it does something unexpected—it depicts its odd characters as exactly what they are: human beings.

The story is pretty pulpy, however. In it, a traditionally attractive circus acrobat called Cleopatra seduces a sideshow little person, Hans. Cleopatra woos Hans from his companion, Frieda, in order to gain his sizable inheritance. This evil plot requires the trapeze artist to ingratiate herself into the community of sideshow performers—and she does so with unabashed villainy in her heart.

Unlike you, she doesn’t see these people as anything but freaks. Like I said: pulpy. 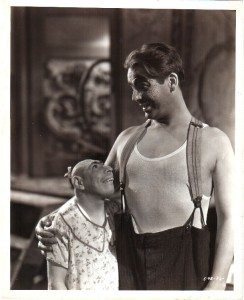 Is what we’re seeing here an accurate portrayal of this marginalized community? Hells no, but that doesn’t mean there’s no authentic insight on offer. Browning actually spent his youth working in the circus, performing as a “living corpse” and putting on sideshows. These experiences let the esteemed director (of the orignal Dracula, for one) portray his subjects as fully fledged, feeling individuals. So, in one sense, the cast was exploited (unsuccessfully) as a drawing card for audiences. In another, it’s hard to watch Freaks and not believe that Browning had anything but good intentions.

The clear takeaway is that mocking these people is wrong and bad for your health.

Unfortunately, Freaks was way too extreme for its time. Test screening were beyond disastrous and the original version was hacked up in an attempt to make it more palatable. Its vengeful ending was truncated, much of its comedy trimmed away, and other cuts were made leaving only a 64 minutes of the original 90. Even this shortened cut died a quick box office death. It wasn’t until much later that people recognized Freaks for what it is: a significant and captivating film that everyone should watch. 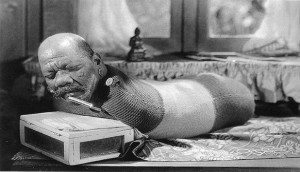 Alas, by the time people were ready for Freaks the original cut was lost. Perhaps some day a janitor in a Norwegian mental hospital will find a forgotten print of Browning’s version and we’ll all rejoice? And maybe we’ll also find the Maltese Falcon and a full set of McGuffins? One can hope. You can’t stop me.

Anyway. I shit thee not. Freaks is incredible. Dare to open the lid on this mysterious, misunderstood, and now extinct society! See the Siamese Twins! Marvel at the Human Skeleton! Dare to have a nice friendly chat with The Living Torso! He’s pretty cool and not bad with a knife. 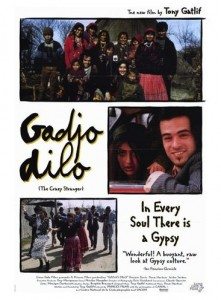 I saw Gadjo Dilo at the 1997 San Francisco International Film Festival. I didn’t know much about it—only that it was made by Tony Gatlif whose earlier film, a documentary called Latcho Drom, was a big success. Latcho Drom followed the migration of the Romani people (often disparaged as Gypsies or Travelers) from India to Spain through the medium of music.

The soundtrack is pretty damn good.

Gadjo Dilo is also about the Romani and it will likely not surprise you to learn that Gatlif—a Frenchman—is of Romani descent. So in this film (and in Latcho Drom), what we’re getting is a behind the scenes tour of a culture few people get an authentic introduction to.

In the absence of information, the public’s perception of the Romani is often clouded by prejudice—just as it was of Tod Browning’s sideshow performers. 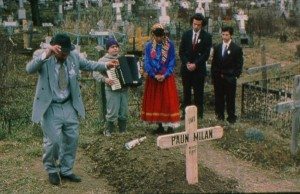 Righty-ho, tho. Gadjo Dilo! This is a great movie and one I’ll bet you’ve neither seen nor heard of. In it, we get the story of a French bloke, Stéphane, who’s on the hunt for a Romani singer whose music his dear departed dad used to adore. It’s a personal quest which has drawn him from Paris toting his portable recording equipment. At the beginning of the film, Stéphane connects with an elderly Romani, Izidor, who semi-adopts him in the place of his incarcerated son. And just like that Stéphane is living in a Romani village, trying gain acceptance and track down his singer. 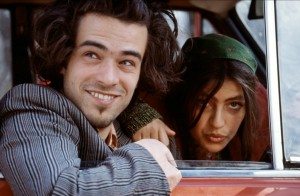 All this is difficult, because Stépahane is a gadjo—a non-Romani—and they think he must be crazy (dilo).

Without giving away the shop, the story is one of cultural divides. It’s not a sweet, heartwarming tale lousy with schmaltzy platitudes and harp music. It’s about the Romani and things happen in a Romani way—or so I assume, having learned most of what I know about the Romani from this film. Like Latcho Drom, the film is filled with music and cultural events, but not in a way that feels forced at all.

It also has one of the most unique love scenes I’ve ever beheld.

Gadjo Dilo is a celebration of Romani culture and also a lament for it. Join Stéphane as he sticks his nose where it doesn’t really belong and catch a forbidden glimpse of a misunderstood people and lots of naked people and some toe sucking.

Because what’s being a voyeur without sex? Boring, that’s what.

I’ll see you later whether you like it or not (because I’ll be inside your closet with Kyle McLachlan).