(Very mucho SPOILERS-O-RAMA throughout, should you be concerned about such things)

What with all of our Dark Knight talk these past weeks, I figured I should say something now that I’ve actually seen it. The problem is that the problem with The Dark Knight Rises is that it’s an affectless exercise in big budget filmmaking, neither especially good nor especially bad. It merely is. There’s nothing to get angry about and nothing to get excited about. I walked out with the feeling that I’d been given a job, that is, to see The Dark Knight Rises, that I’d completed the job satisfactorily, and now that I was done I could move on to other things. It was rather like pulling weeds in the garden on a pleasant Sunday afternoon. Not a task one is eager to do, but at the same time, it’s a nice day, you’re outside, and those weeds need pulling, so there’s nothing very bad about it either. 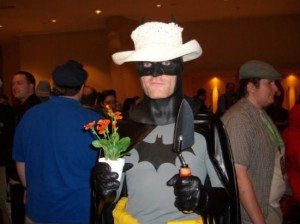 flowers or the trowel? it’s your call, evil-doer!

In retrospect, I find I like the movie less and less. Is there much to praise? It has that Nolan look to it, but I find I don’t much like that look. It worked for me in The Dark Knight, more or less. But with Inception and now TDKR, I find the look boring and predictable. The Imax sequences, though lovely in how dense and rich they are in comparison to the rest of the movie, I felt I’d already seen in The Dark Knight. They impressed me hugely then. Now it’s just more swirling shots of cityscapes and car chases. 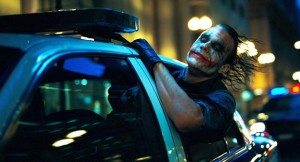 The Joker in Imax

Sorry, right, praise, I’m looking for something to praise. Anne Hathaway pulls of a great Cat Woman, or whatever they call her. She gets to be Han Solo, out for herself until the end, when she shows up at the last second to save the day. Or part of the day. What does she do again? I think she shoots something. Or someone. Anyway, she does a nice job. Michael Caine is great as always. Too bad he has to vanish for no discernable reason midway through, in a completely baffling scene. Isn’t Alfred’s whole reason for existence to help Bruce Wayne pull through the hard times? And then he up and leaves, and Bruce, all teary eyed, lets him, and then he’s gone and no one really cares. 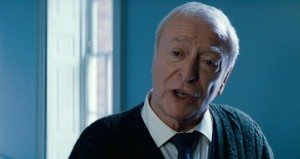 Which the big problem with this movie is that no one is allowed to care about anyone. As in Batman Begins, Nolan strips out all emotion in place of endless weighty thematic exposition. He moves his chess pieces around well enough, he knows what relationships need to be present, but he doesn’t allow those relationships to have any emotional meaning for the characters. Look at the end. We get the big twist—oh my god! Miranda Tate is the daughter of Ra’s al Ghul! Bane is just some guy!—and what does it matter? It’s intellectually interesting, it fits right in with this kind of movie, and it’s totally unaffecting because neither we nor anyone in the movie cares about her. She’s just that businesswoman Bruce got it on with. Oh, she’s evil? Well, okay, sure. Was Bruce into her? Who knows. In the end he runs off with Cat Woman. 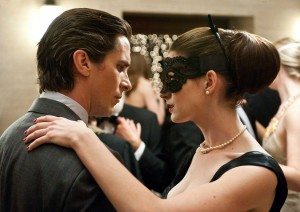 “You look like my mother with those pearls on. Will you marry me?”

I’ve been trying to figure out the character of Bruce Wayne. He’s a bit murky. He’s been pulling a Howard Hughes for eight years because the Joker blew up what’s her name. Cat Woman steals his fingerprints, Bane turns up, and he’s back to being Batman. Only he gets his ass kicked, winds up in a prison, where the ancient art of “rope hanging” heals his broken back (and his knees and joints and everything else that doctor told him was messed up?). But he can’t escape, because he doesn’t fear death. His lack of concern for himself, driven by epic self-pity regarding, presumably, the deaths of what’s her name and his parents, means he can’t, um, climb high enough, or no, he’s not afraid enough of falling, he welcomes falling, he welcomes dying, so by learning to accept his inner pain, by desiring life, and therefore fearing death, only then may he escape and fight the good fight. I think.

I suppose, to be fair, with that set-up, he can either live or die in the end. Which is likely why Nolan has him do both. Me, I don’t think his living happily ever after rings true to the spirit of these movies. It feels way off. Especially considering Batman’s seemingly final encounter with Cat Woman, where when she tells him he’s already given Gotham everything, he says, “Not everything. Not yet.” I.e., he hasn’t given his life yet. What else could that possibly mean? Nothing. It’s there to have exactly that impact. It’s that moment when we know he’s going to die. It’s a line with emotional weight! Fantastic. And he does it, he sacrifices himself to save the city and its people. Only wait, no he didn’t, he ran away to Europe where he’s living large with Cat Woman, and it’s cool just to nod at Alfred, because talking to him would, um, well, look, Alfred had this fantasy back when Bruce—oh, nevermind. 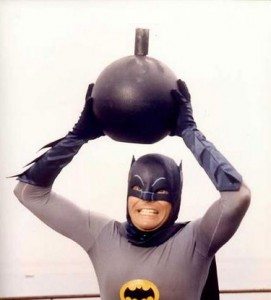 “I’ll blow myself up to save you!”

It’s cheap, this ending. It’s a cop-out. And what of Robin? He takes over the Batman game? Why? Is Batman a vigilante the city doesn’t need or isn’t he? The cops are corrupt and worthless as Robin sees it, yet they’re the heroes of the movie. Is Gordon a hero? Robin calls him out for daring to lie about Harvey Dent. So is Gordon corrupt for passing whatever the Dent Act is? I’m afraid that as far as justice goes, this movie is at least as addlebrained as Hang ‘Em High, as discussed by the Evil One. The ideas are there, but no sense is made of them.

The same goes for Bane and his plan. What is it, exactly? It’s to blow up Gotham with a big-ass bomb. So why the allusions to the poor being screwed by the rich? It seems to be shoehorned in for the sake of topicality without meaning anything to anyone, aside from Cat Woman, vaguely. Are we supposed to kind of like Bane for crushing the wealthy of Gotham? Are the people of Gotham supposed to like it? As presented, no, they don’t. So what’s being said here? Nolan has said that the movie is his version of Dickens’s A Tale of Two Cities, hence the revolution and so on. Only how does that fit in here again? Ra’s al Ghul wanted to destroy the city. He never said anything about revolution and show trials. And his daughter wants the same thing, plus the death of Batman. 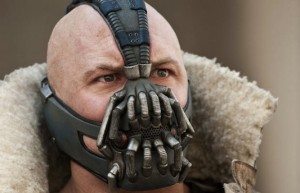 Poor Tom Hardy and his horrible mask. Masks can work for bad guys (see Darth Vader and The Humongous for prime examples), but here it’s a total flop. Bane is barely a character; he’s the mask and nothing more. And having to strain to make out what the villian is saying, whether or not his words really matter, is no fun at all. A movie like this is only ever as good as its villian, and Bane is not only boring, he’s not even the real villian. The real villian, Talia al Ghul, is, I don’t know, nothing aside from vengeful, I guess. She stabs Batman to no effect whatsoever and rides in a truck for awhile before keeling over dead. Was I supposed to care about that? 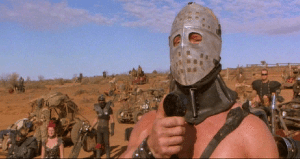 Is this even a Batman movie? It feels more like one of the Bourne movies, or James Bond, or something where Bruce Willis saves New York and a small child from terrorists.

I don’t even know what else to say. This little rant feels as middle-of-the-road as the movie. I just can’t get up a Prometheus-sized head of passionate angry steam here.

To sum up: The Dark Knight Rises came out. It’s your job to see it. When it’s over, you may return to your lives as they were. No harm no foul.

17 responses on “Like A Bad Soufflé, The Dark Knight Rises Falls Flat”