If you believe what you read on the side of buses, The Dark Knight Rises is opening on July 20th. That’s pretty soon.

And after recent disappointments (cough *Prometheus* cough), I’m glad to have something to look forward to. Something that has a higher chance of making a single lick of sense. Something less likely to send me into the kind of rage that can only end face down in a big bowl of bitter tears ice cream.

Certainly, The Dark Knight Rises will be better. It could not be worse. Right?

So now that we’re in agreement about looking forward to Batman v3, how would you like to get ready to watch it with me? No! Not like a date, jeez! Just as friends.

Here is my proposal: We watch a couple of films together. Which films, you ask? Why, I respond, films that will tenderize our calloused brainy bits, preparing them for raspy-voiced caped crusaders, Cat Woman in tight pants, and probably a really long third act. Films that will free our ocular sockets from non-Batty blasphemies. Films that will limber us up, so that when The Dark Knight Rises rises, we are honed, like sharp things. Knives, they’re called.

These films will all focus on different aspects of what we expect The Dark Knight Rises to offer. We’re not talking about a bunch of Batman movies, or even just superhero movies, as that’s a little obvious. Instead, let’s pick a bunch of wildly varying companion pieces. Maybe one will have Christian Bale in it. Maybe they’ll share the same theme. Maybe we’ll watch some of cinematographer Wally Pfister’s early work? Maybe not.

We will do this, so that when we see The Dark Knight Rises on opening night, we can say insightful things like, “Isn’t it odd how this plot is so similar to that of The Last Temptation of Christ?” (See, already your head is exploding.)

Here’s how this project will work:

The first film we’ll be watching is… 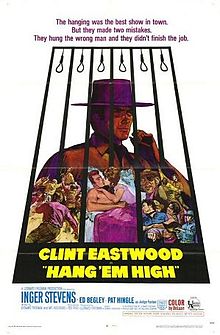 Why this movie? Because I’ve never seen it. Because I know it’s about a man who’s been hanged, but who survives. Then (and stop me if this sounds familiar), with the law on his side, he goes after the bad men who require some rigorous application of justice. Plus: Clint Eastwood and (no really) Dennis Hopper, Bruce Dern, and the fucking Skipper, Alan Hale, Jr.

I am unsure, but I expect there will be some sort of happy ending. Let us see, shall we?

Are you with me? Good. Then watch Hang ’em High and we’ll talk about it on Monday.