This week’s Mind Control Double Feature is all about the good old days of VHS tapes, which pretty much were horrible. They’d get all warped and scratchy and you’d lose picture lock. Yep. Sure do miss those things.

This is also going to be one of those double features that slaps you around before kissing you goodnight. It has been eating tuna and onion sandwiches so no tongue. 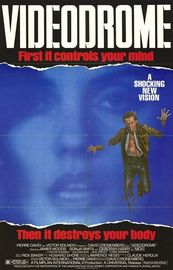 David Croenenberg is one seriously weird dude. While I haven’t seen everything he’s made, I have no problem believing that this film is his weirdest. It is, basically, a film about a man who is perverted by an insidious video signal. We’re not talking about some goofy Ringu ghost bullshit, though. This signal is created by men. Maybe you’ll catch it on late night television and develop increasingly violent and disturbing hallucinations? Which, maybe, unless you’re totally crazy, are becoming real, and really icky?

James Woods stars as Max and you also get some Debbie Harry in there. 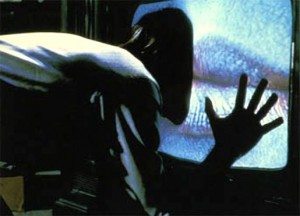 If you haven’t seen Videodrome, I guaran-damn-tee you that some of the images within will stick with you for longer than you might prefer. It isn’t so much scary as it is utterly disturbing. No one’s going to jump out at you and go oogity-boogity! Just, you know, Max will find a gun in his stomach, which he left there in a dream, and he’ll retrieve it through his new stomach video slot, which looks an awful lot like a man-gina. 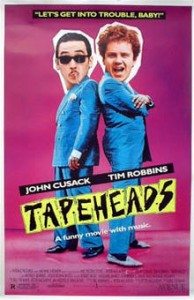 Tapeheads is the best film ever made starring a very young John Cusack and Tim Robbins and the Sam half of Sam & Dave.

Tapeheads was indie before there was indie. It’s insane, funny, stupid, and insanely funny stupid. The plot is completely understandable. Cusack and Robbins get fired from their security guard jobs, decide to make music videos, and try to reestablish their childhood heroes—the Swanky Modes—as musical superstars by hijacking a Menudo concert.

Also, there is a ninja bitch fight, Devo singing in Swedish, a Fishbone soundtrack, some nutsy-cuckoo cameos (Weird Al, Courtney Love?), and a senator dressed like Little Bo Peep. 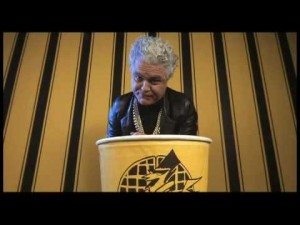 Back when I watched movies on VHS tapes, this was one of my favorites. I’m gonna watch it again real soon and I’m positive it holds up. How could it not? And after Videodrome, you’re going to need something cheerful and mentally deficient anyway.

Tapeheads, if you want to be serious about it, is all about lampooning the music video industry. I would recommend you avoid being serious about it, though. Think of it like Repo Man with a bad work ethic and dancing chickens.