We are all screwed. We are screwed every which way. Up, down, sideways, and inside out. Screwed.

It is now 2013, a year I had hoped might never come. But come it did, and sooner than desired.

For aeons, our elders have foretold of this doomed and dastardly date. They warned us in letters written in light, 30-feet high and flickering like fire. They sent us messengers—befuddled, mysterious, indecipherable men wearing eyepatches—but did we listen? Did we fucking listen?!

And now it’s 2013 and we’re just going to have to grin and bear it and sacrifice some virgin goats and watch these two films. We didn’t learn and now we have no choice.

Because I’m not talking about no stupid Mayan calendar millennium bug. I’m talking about films that were presciently set in the year 2013. Definitively the worst. year. ever. Films that are here, now, living amongst us, just waiting to come to life.

May god have mercy on our souls.

I’m honestly at a loss for words. Trying to describe The Postman is like trying to paint a picture of Teletubbies invading Iwo Jima using only materials you can find in your fridge. Some things just have to be seen to be believed. The Postman is one of those things.

I could tell you, for example, that Kevin Costner—producer, director, and star of The Postman—plays an after-the-collapse postman who single-handedly saves the world by reviving the postal service. But that would be misleading. Because you might think, hearing that, that there is some level of sense to be made of The Postman.

There is not. This is 2013. The year in which our only hope is that Kevin Costner brings us a letter. Might us well top yourself now, huh? Not even Olivia Williams can save you in this, her first feature role. (By the way, she’s said that she had a great time making The Postman. Everyone was very nice and she had absolutely no idea what was going on.)

Anyway. There are many films that one could reasonably claim are the worst film of all time. Of all of them, this is only the third to be a three–hour–long Kevin Costner vehicle. And you think I’m kidding. 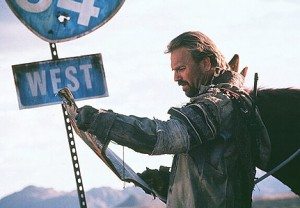 Watching The Postman is like making love to a Slinky. I have no idea how, but I just want you to think about it a little bit. Keep thinking. There. Now you’ve got it. Now take a shower.

Why is The Postman so unutterably bad? Well, Costner performs some Shakespeare it. He also tells people the new President is named Richard Starkey. Tom Petty has a bizarre cameo. It’s a three-hour film about mail carriers. Is any of this helping? No? No matter. You still have to watch it. For this is what the future has brought us.

That’ll teach you to stay alive.

While you may curse the gods and fates and Stand By For Mind Control, the truth is, watching this film will be an educational experience. From it, we learn the price of hubris. We sit, gobsmacked into stunned wonderment, boggling that so many people spent so much time and money making such an unmitigated turd. It’s truly a wonder to behold. You will love it.

Watching The Postman, we may also glean a thing or two of the way Hollywood works—or fails to—which leads us to our second feature. 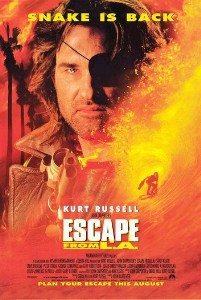 Many people consider John Carpenter’s 1981 film, Escape From New York, to be a lot of cheesy fun. In it, Kurt Russell plays the down and dirty Snake Plisken, an eyepatch-wearing criminal lout who’s the only man devious enough to rescue the President from the walled-in prison of 1988 Manhattan. (That was before Guiliani. Now it’s safe to throw up in Times Square again.)

Fifteen years later, Carpenter rolled out a sequel, Escape From L.A. This one is set in 2013 and is different in that Kurt Russell now looks old and puffy. He probably needs that eyepatch.

No. I kid. This one is different in that this time the part of the country that’s been turned into a prison is Los Angeles. Hollywood has been cut off from the country by an earthquake and flood, something which will happen any moment now. 2013, right?

In Escape From L.A., the religious-fanatic president-for-life’s daughter is seduced by a terrorist named Cuervo Jones via an online dating site-type-thing (I swear, I’m not making this up). She steals the magical squiddlyspootch what will fry all the electronics in whatever part of the world you want, permanent like. It’s a massive, satellite-based TV-B-Gone called, naturally, The Sword of Damocles.

The president’s daughter, Utopia, and Cuervo Jones are gonna let loose holy hell from L.A. There’s only one possible hope. That’s right. Just nuke the whole prison-city and be done with it. What? No. Oh yeah. Snake Plisken. That yegg’s whats crazy enough to sneak into L.A., steal back the squiddlyspootch, and save the country in exchange for a full pardon. 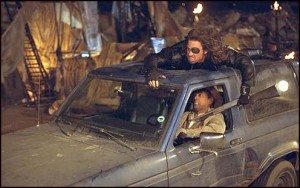 Here’s what I have to say about Escape From L.A.: If you made it through The Postman, this film will be a piece of cake.

Steve Buscemi is in it and so is Pam Grier, so it’s almost like a Quentin Tarantino movie, just way less pretentious. There are a whole lot of “LA” jokes with surfers and stuff. I’d keep going but honestly, I know there is little chance anyone is watching anything after The Postman.

See, the world collapse is coming and it’s most likely that the Blu-Ray player you got for Christmas is going to get fried by satellites running off Kevin Costner’s inspirational postal service before you can start the second feature.

So you and the Slinky can just head to bed now. Don’t bother setting an alarm. In the morning, it’ll be 2013 and we’ll all be screwed.