Are you infuriated because Looper tried to use your brain as a toilet plunger? Do not you fret none. Stand By For Mind Control has just the ticket to make everything all better. 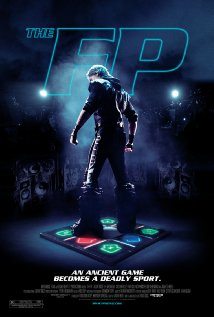 If you thought Looper made no sense (and it didn’t, not even a little), just wait until you watch The FP. This movie is so completely, bombastically, unabashedly ridiculous that even using a word like ‘sense’ in a sentence near The FP is foolish. Durn foolish.

The FP… where to start? Okay. Fine. The FP stands for ‘Frazier Park’ and it is in this hole-in-the-middle-of-nowhere town that our story takes place. It’s a timeless tale of underdogs, gang warfare, really bad fashion, lots of idiotic slang, and something that is exactly like but not quite Dance Dance Revolution.

Brothers JTRO and BTRO represent one side of town and their gang squares off against L Dubba E and his gang, but they don’t fight with guns and knives and that stuff. They do it in DDR showdowns. Fatal ones. And if that sounds stupid, trust me, it is. Really stupid. But see, the Trost Brothers—the guys who made this film—aimed deep into the heart of stupid and struck a killing blow.

The FP is vulgar, wrong, and actually very funny. Every trope of the underdog sports / gang film is strung up by its nutsack by a crew who’s gotten deep into the Red Bull & LSD punch. And after Looper, which was nonsense that thought it was brilliant, it’s awfully relaxing to watch something that’s nonsense and knows it. It doesn’t care. You won’t care. How can you care when some Mr T-looking dude is ripping his shirt off to battle for the town by dancing on a plastic mat wearing platform boots?

So kick back, watch yourself some FP, and, if you can manage it, drink a whole lot of turpentine or something. Because this movie is very dumb.

Watch The FP now on Netflix