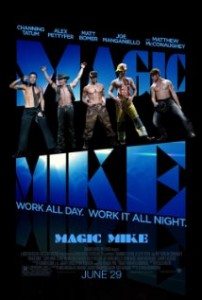 I just watched Magic Mike, Steven Soderbergh’s latest feature. This is a film about male strippers that stars Channing Tatum and Alex Pettyfer. It was the only one of Soderbergh’s films that I hadn’t yet seen and now I’ve seen it, so I’ve seen them all.

The OCD part of me is very pleased by this.

Also, I am pleased because I liked Magic Mike. It is, as I mentioned, a film about male strippers. Quite a bit of the movie is taken up by men, on stage, disrobing while thrusting and gyrating and sweating. At no point in the film could you say, “You know, I really expected to see some male stripping in this scene but Soderbergh has let me down.”

That’s part of what I love about Steven Soderbergh.

He is not the type of guy to make an exploitation film and go light on the exploitation. If he makes a B-grade martial arts picture starring Gina Carano, you will not see it and decry the lack of face pummeling and real, physical stunts. You can count on him to go all in. 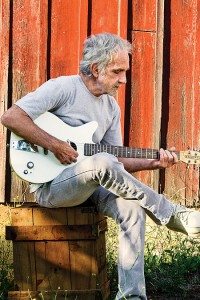 And what helped me solidify this undeniable fact is Magic Mike. And, illustratively, J.J. Cale.

Let’s assume for a second that you are familiar with J.J. Cale. You know that he is the guy who wrote After Midnight and Cocaine—songs Eric Clapton made famous. You know that despite his talent, he never really found his moment in the spotlight. That when he was offered a slot on American Bandstand, he passed. They had told him his band couldn’t come to the taping and he’d have to lip-sync.

Yeah, no. He told them to get stuffed. 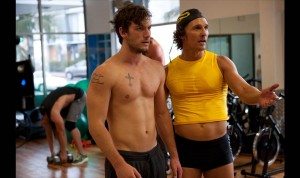 Quentin Tarantino, though; that guy is an clown. Maybe you grew up with Pulp Fiction being the coolest film ever, or quoting lines from Inglourious Basterds. I can respect that. I don’t want to piss on your parade. Except fuck you and your parade.

Everything Tarantino does—whether it’s any good or not—is a big show. He’s going to make the biggest noise he can with each one of his movies, using his own mouth on screen in Dolby THX if at all possible. 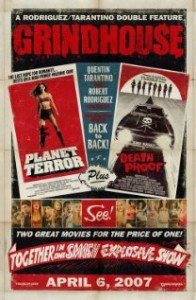 It was the same with Tarantino’s half of Grindhouse. Sure, grindhouse pictures had a lot of talking in them. Filming people talking is cheap and those films were cheap. Nobody liked the talking bits, though. That was the part of the film where you went to get more popcorn or made out with your date at the drive in. Tarantino wasn’t being authentic adding endless nattering dialogue to Death Proof; he was being boring. And no grindhouse film ever set out to be boring.

Robert Rodriguez got it. His half of the double bill—Planet Terror—was chocko with B-grade action, gore, sex, ridiculously implausible situations, and a real sense of humor. He had fun making his movie. Tarantino, with Death Proof, couldn’t stop telling us how cool he was to have any fun.

And if there’s one thing that isn’t cool, it’s telling people you’re cool.

That’s why Quentin Tarantino isn’t as cool as male strippers.

I guarantee you that no one making Magic Mike came home from the shoot and dreamed of being nominated for an Academy Award or thought he was, just maybe, a genius. It’s not that they weren’t trying to put together a damn good film, it’s just they didn’t take themselves so seriously. Magic Mike is so unconcerned with being cool that it couldn’t be cooler.

I think you should see it.