There is, perhaps, a thin film of deception spread across the skein of the world. What you see with your eyes, what your ears alert you to, what your grubby fingers get all greasy—that is not reality.

But who spins this deceit, and to what end? That is what we will investigate in this week’s Mind Control Double Feature. And this week’s double feature is coming early because while you think it’s Tuesday, it’s really Thursday. Or maybe it has something to do with Thanksgiving coming this week? I can’t tell any more. 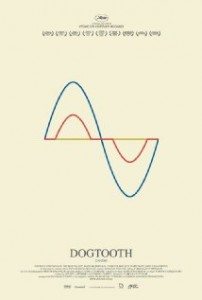 I am sorry, really, but you’re going to have to watch Dogtooth.

On the positive side, this is a darkly funny and bizarrely weird film. On the negative side, watching this movie is little like having afternoon tea with the Queen when you’ve got the stomach flu. You will be uncomfortable.

Dogtooth is a fairly recent release (2009) from Greek director Yorgos Lanthimos. The story is simple: a married couple keep their adult children sheltered and innocent of the world beyond their property’s borders through an elaborate patchwork of ruses, lies, and misdirection. The innocent kids have no idea what lies beyond the fence; they have never seen the other side.

What’s more, everything the parents tell the children about the outside world is grossly distorted. Airplanes, for example, when they fly overhead, are nothing but toys, say the parents; as they disappear across the sky one of the parents throws a toy plane down from the roof, which their progeny then fight over. The parents tell the children that they’ll be old enough to leave the compound when one of their dogteeth falls out—an event resolutely unlikely to ever occur.

Watching Dogtooth is a bit like watching the neighborhood idiot try a stunt on his bike. A stunt which you are certain he will not pull off. There will be pain. Soon, someone will have to tell his mother, or call an ambulance. Consequences cannot be avoided forever. No doubt about it. Go ahead and egg him on, though. It’s funny, right? Right?

It will be funny, right?

When we laugh at Dogtooth, it’s the sick laugh of recognizing the catastrophe in ourselves. What wool, we wonder, do we allow to comfortably rest over own eyes? If we knew it was there, would we fight against it?

This kitten is a dead-eyed killer.

So what is Dogtooth about? Is it about the lies that parents tell their children, in the name of protecting them? Or the mistruths that governments foist on their citizens, to maintain national unity? Or is it about the corrupting influence of modern media? Yes, maybe, and only in a sarcastic way, I believe.

Dogtooth is a down-the-rabbit-hole film in which the rabbit struggles its way back to the surface. It’s a challenging watch, full of ideas and scenes and images that will stick with you. While you will be unlikely to enjoy it wholeheartedly, you are likely to be glad you saw it. And to tell other people to watch it.

Although maybe not your parents, over Thanksgiving. 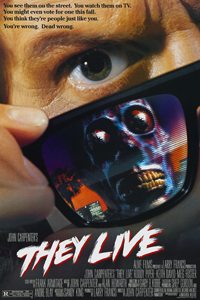 That’s why we’re watching They Live, which is bludgeony in a completely different, more meat-tenderizing way.

If you don’t know about They Live, well then you’re in for a treat. This movie is exactly like Dogtooth except that the main character is played by a professional wrestler, aliens control your brain, there’s a healthy serving of ass-kicking, and we’re all out of bubblegum.

They Live is a John Carpenter film, so if you just watched The Thing and loved it (right? right.) you might want to give this picture a shot despite how second rate it looks. It’s not a deep film, or challenging intellectually, or even much more than a B-movie built around a solid premise, but that doesn’t mean it isn’t worthwhile in it’s own distinct way.

In They Live, big-name 1980’s professional wrestler Rowdy Roddy Piper plays a drifter named Nada. Nada and his buddy Frank (the always estimable Keith David) stumble onto a strange conspiracy. The local slum preacher is on to something big, but the Man comes cracking down hard. In the aftermath, Nada ends up with a box of mysterious sunglasses. When he puts a pair on, he sees through the illusion of modern life—aliens, he discovers, are among us, controlling us subliminally. 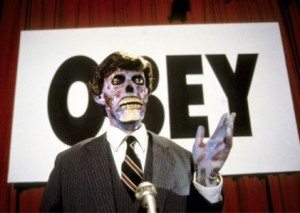 It is from this film that Shephard Fairey took his inspiration for his famous Obama “Hope” poster and for much of his earlier graffiti work—namely his “Obey” stuff.

They Live, in turn, took its inspiration from a few different sci-fi sources—a short story and a comic book. That’s part of why Carpenter used a pseudonym in his screenwriting credit (a name from H.P. Lovecraft’s work, as it turns out).

So why is They Live like Dogtooth? Because they’re both about trying to find the truth in a world where the powers that be would prefer you remain unquestioning. In Dogtooth, the oversight comes from a twisted protective impulse. In They Live, the oversight is definitely commercial and evil. Carpenter was, in this film, reacting to the ubiquitous advertisement and commercialization of the 1980s (and it hasn’t let up any).

In the movie, aliens and their human toadies suck up all the wealth of the modern world. Carpenter said in an interview:

They (the aliens) want to own all our businesses. A Universal executive asked me, ‘Where’s the threat in that? We all sell out every day.’ I ended up using that line in the film.

(Presumably, the Universal executive said that because he was an alien. That’s the only explanation that makes sense of both that quote and Howard the Duck.)

One of the more interesting insights in They Live is just how reluctant people are to waking up to hard realities. Towards the middle of the film, Nada tries to get Frank to wake up by handing him the special sunglasses. To understate the matter, Frank is resistant. It’s an extended scene. You won’t miss it.

So there you have it folks: the perfect double feature to get you through the holidays. Why? Because no matter how bad your family may seem, they’ve got to be better than the parents in Dogooth. And no matter how overbearing your kinfolk are, at least they’re not skeletal aliens who want to control your brain. Probably.

3 responses on “This Double Feature is Not as It Seems”