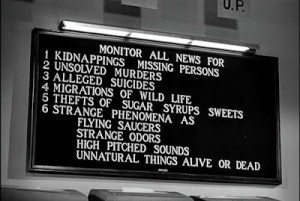 This is just generally good advice.

The only way to stop them, of course, is a good old fashioned dose of cleansing fire. Maybe, dunno, nuke them from orbit? Except, egads! The bug queen bitch has got her prickly forelegs on our children! And children, goddammit; they are the future.

What’s interesting about watching the 1950’s giant bug film Them!—the first of its kind—and then the 1980’s nigh-unstoppable xenomorph sequel Aliens is not so much that their stories are so damn similar. It’s the fact that this was inevitable.

Once you start with a certain premise—”deadly queen insect and brood threaten humanity”—there are only a few feasible paths you can take, story-wise. Most of them are dumb or depressing. The other one describes the basic plot of Them! and Aliens.

Watching these two films in sequence is a real treat, and not just because of the similarities. They’re both honestly great films. Them! was the Die Hard of its day, spawning a raft of giant something-or-other films. Aliens fed Paul Reiser to double-jawed phallic-headed jelly-covered monsters. What’s not to like?

And, to cut you off at the pass, one didn’t rip off the other any more than Tenzing Norgay ripped off Moses. Any idiot understands you go up. Or destroy the egg chamber. Same thing. 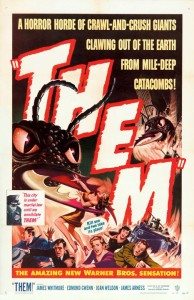 This may be the best movie poster ever printed.

If you’re dubious about a (mostly) black & white, sci-fi film from 1954, let me calm you. This “hackle-raising melodrama” isn’t nearly as cheesy as you might imagine. Yes. A lot of the actors opt for a distinctly oaken 2×4 style (check out our hero’s reaction to finding his pal Gramps dead, for example). The women—one is a scientist at least—may resist from stuffing their fists into their mouths when they scream, but just barely. And the giant ants are about as realistic as Donald Trump’s presidential aspirations.

It don’t matter none. Them! works.

It is the cream of the crop of 1950’s science fiction. While films like Invasion of the Body Snatchers and The Day the Earth Stood Still may hold up equally well, Them! needs to be seen to be appreciated. Like those other two, it’s not just a nail-biting tale of horrible, ghastly oogity-boogities threatening our very existence—it’s also a reflection of the day’s fears.

How do the giant ants come to be? Why, nuclear testing of course. They spring from the site of the first bomb tests in New Mexico. What, the characters wonder, will come from the other test sites? (Cough *Gojira* cough)

Here’s the basic story: Local cop Sgt. Ben Peterson (James Whitmore) finds a little girl wandering the desert in shock. He investigates with the help of federal agent Bob Graham (James Arness) and field-leading entomologists, Dr. Harold & Dr. Pat Medford (Edmund Gwenn and Joan Weldon). You will be shocked to learn that the problem is giant ants. And the giant ant problem is that new queens have hatched.

Do NOT leave your picnic unattended. 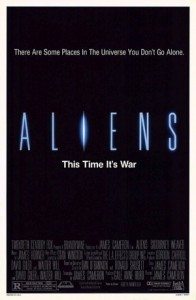 You may declare, hand on hip, that Ridley Scott’s Alien is a far superior film to James Cameron’s more-action/less-horror sequel Aliens. If you said this, I would agree. Then I would continue on, because Aliens is still a damn fine film.

Before Cameron thought he understood what an emotion was or thought that what he read on the back of his cereal box would make a deep and meaningful basis for a series of films about bestiality, James Cameron made great movies. To varying degrees I can still get behind The Terminator, T2: Judgement Day, The Abyss, and even True Lies. Right in the middle of all that, he helmed Aliens.

Where Alien was a film about the horrors within ourselves, Aliens was an anti-corporate bug hunt. It’s not deep, but that will surprise exactly no one. What it is, is exciting.

Sigourney (a name she chose for herself. HERSELF!) Weaver reprises her role as Ripley. She gets convinced to follow a unit of Colonial Marines out to LV-426 where a passel of terraformers have dropped off the radar. LV-426 being, of course, the rock where Ripley and her crew mates on the Nostromo first got to suck face in Alien. Or get face-hugged. Whatever.

Chances are that you’ve already seen Aliens. Either you’re old enough to remember seeing it in theaters or you’ve got the DVD in a closet somewhere. Maybe you even watched it again before being horribly disappointed by the flaming turd that was Prometheus. In any case, watch it again. Right after you watch Them! 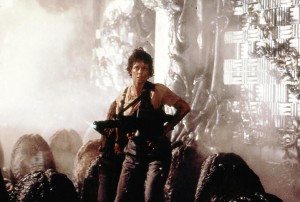 And while you’re watching Aliens, I want you to think about how the two films cover a lot of the same ground. Could they have gone in different directions? Sure. Should they have? Probably not.

If you can think of a better way to tackle “deadly queen insect and brood threaten humanity” then you should be riding your rainbow-powered unicorn to meetings in Hollywood.

And if you’re doing that, please say hi to Rachel Weisz for me when you get there. I think she’s purty.