Let me tell you the story of my life.

I experienced a single traumatic/inspirational childhood event that—without my knowledge—shaped my entire existence. I struggled to find my own particular brand of genius as a young adult. Although I had talent, I got sidelined by something shameful, probably drugs. Then, in the period of my darkest despair, I encountered the beauty trapped in my soul. Cathartically, I rose to brilliant heights and was honored by the world (perhaps just after I died tragically).

Just because we’re used to our drama coming in a certain flavor doesn’t mean we should force people’s lives into that model. It may make them seem more iconic, but… if they need that leg up to seem compelling, pah!

Many biopics people include on best-of lists drive me crazy for just this reason. Ray? Really? Cinderella Man? Shine? These aren’t stories about people I recognize as real. They’re caricatures of people transformed into precious idols, regardless of what they were really like. Their subjects are masticated and gently spit into our mouths like we’re a nest full of baby birds.

I am no goddamned baby bird. I like my heroes flawed and my lessons hard learned.

So, here are 10 of the best biopics that a body’s got to chew to digest. Stories that bite back. Films that make you think about something deeper than how nice it would be to be adulated.

(I am deliberately not including anything that regularly appears on lists of great biopics, as that would be boring. Go ahead and rant in the comments if it makes you happy.) 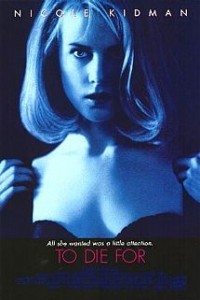 This is a film from the glory days when Gus Van Zant made films we were overjoyed to see. It’s based on the story of Pamela Smart, real-life nut job. Pam wanted to be a famous newscaster, so she seduced some sad-sack high school kids and conned them into offing her husband. While Van Zant’s film isn’t truly a biopic, I’m squeaking it in under the wire. This is a grimly dark comedy that lets messy humanity run wild. 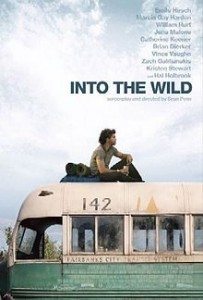 I didn’t enjoy watching Sean Penn’s adaptation of John Krakauer’s book, Into the Wild. During the film, I had a hard time caring about the exuberant, self-centered, granola-headed life of Christopher McCandless, which the film documents. It was only after it ended and I spent the next three nights unable to sleep, furious at McCandless for being such a bone-headed douche bag, that I began to grudgingly admit that Sean Penn had done exactly what he set out to do.

This is not a film about a life one wants to emulate. It is a film about youth, the illusion of invulnerability, and harsh realities. It’s about a real guy and, like him or not, you won’t forget him. You also will remember to bring a cellphone with you when you go camping. (Extra credit: watch with 127 Hours) 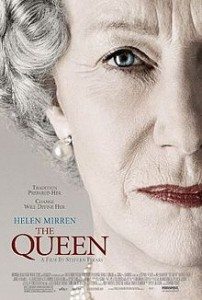 Stephen Frears’ portrait of an off-kilter Queen Elizabeth in the wake of Princess Diana’s death is notable for a few reasons. Firstly, Helen Mirren is exceptional in the title role, as is Michael Sheen as Prime Minister Tony Blair. Secondly, while never swerving from its focus on the character of Elizabeth, it manages to address deeper ideas. What does it mean to be royalty? How is the world changing? What does that change feel like for a bastion of the old guard?

For me, when I think back on The Queen, I will always first remember the red stag HRM the Q sees, and then laments. It is that scene—without words—which encapsulates and communicates everything within the film. Since seeing it, I have never thought of Queen Elizabeth the same way again. 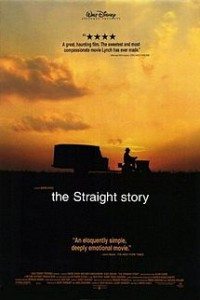 Who, you may ask, is Alvin Straight? Well, I’ll tell ya. He’s the guy this movie is about. Alvin was a World War II vet living in Iowa. He finds out his brother, with whom he is estranged, has suffered a stroke, so he wants to go visit him. Thing is, Alvin can’t get a driver’s license—so he travels the 240 miles on a lawnmower.

This G-rated film is, surprise, directed by David Lynch, who called it, “my most experimental movie.” He shot the whole thing in chronological sequence along Alvin’s actual route. Richard Farnsworth plays the title role in this, his last film appearance (his first was in the 1937 Marx Bros’ film A Day at the Races!).

Why do I love The Straight Story? Because it’s America. It’s the antithesis of fabricated pseudo-reality television claptrap, and yes, I just used the word claptrap. It’s a moving story of a real guy doing something that’s only remarkable for its unremarkability. I bet people do things like this all the time and no one notices. They’re too busy watching Jersey Shore. 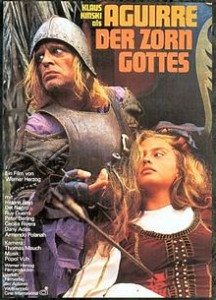 No one, I’ll wager, can fling a spider monkey like Klaus Kinski. Not that I’m recommending anyone try. I am anti-monkey flinging. Still. Klaus Kinki: insane or truly gobsmackingly insane?

In Aguirre, the audience, the cast, and the crew must do what they can to survive—just like the film’s historical subjects. Don Lope de Aguirre was indeed a 16th century Spanish conquistador under the command of Pizarro. He was indeed part of a doomed party that set off to find El Dorado. Since no one returned from the expedition, we have no choice but to assume that writer and director Werner Herzog successfully channeled the actual events of 1560 through, probably, some flying spider monkey’s ancestor.

Aguirre der Zorn Gottes is a madhouse of a film. Herzog got the performance he wanted from the notoriously ill-tempered Kinski by deliberately infuriating him before each take, letting him tire himself out in a frenzy of rage, and then calling for action. It was made on a stolen camera, with stolen monkeys, and Kinski shot someone’s finger off. You’ll love it. 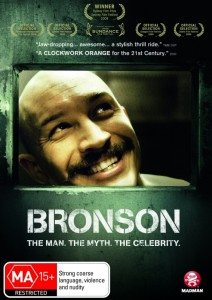 People sure do like director Nicolas Winding Refn. Personally, I’m not so moved—except by Bronson.

This biopic relates the strange-but-true tale of Charles Bronson né Michael Peterson, Britain’s “most violent prisoner.” The man is, frankly, incredible. How can a man be so violent, so often incarcerated, and yet at heart such a well-meaning bloke? Certainly he’s some kind of crazy. But there’s more going on here than that.

Refn’s film makes me think about what modern society leads people to desire, and then about how that same society fails to provide satisfaction to almost all of its tempted children. Bronson wants to be famous (like Pamela Smart in To Die For), but the only thing he’s good at is losing his temper and bouncing people off walls: so that’s what he does. Guess what? He’s famous. Ta-da!

Tom Hardy stars as Bronson. He does not wear a jock strap on his face like he did in The Dark Knight Rises, so he’s exceptionally good and you can understand everything he says.

4. Mishima: A Life in Four Chapters 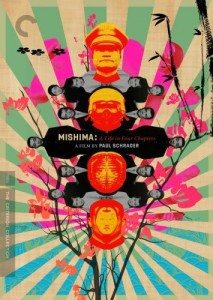 What part of a writer’s life is his writing? In the case of Japanese author Yukio Mishima, the answer is: one cannot tell.

As Paul Schrader’s film depicts, Mishima’s writing and life blend together in a symbiotic nest of veins. Intercut with scenes from his life are enactments of his work. Was he writing about himself or did his writing infect him? How does a man transition through chapters of Beauty, Art, and Action to the finale, the Harmony of Pen and Sword? He does so fantastically—using the literal meaning—but this is no tweener Twilight fantasy. For in the case of Yukio Mishima, as he created, he lived. And he wrote painful, weird, dark words.

There are biopics to inspire and to terrify and to amuse. Mishima is a biopic to cut your chest open so you might better inspect your heart. There will be blood. 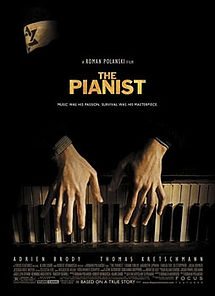 Roman Polanski. This is a man who understands horror. This is a man who understands having the normalcy of life ripped away. And yet, in this story, the story of Polish-Jewish pianist Władysław Szpilman, he is so utterly out-classed his experiences are as meaningful as food coloring. Szpilman survives World War II, the Warsaw Ghetto, the threat of Treblinka. His whole family, his whole community, turns to ashes around him.

Adrien Brody (now somehow an action star) portrays Szpilman as a man without cunning, or plans, or heroism. All he has is dumb luck and precious little of that. Being a famous radio-star pianist means almost nothing. What matters is staying warm, finding food, and remaining alive. That is humanity. Szpilman is humanity. Now go about your normal lives. 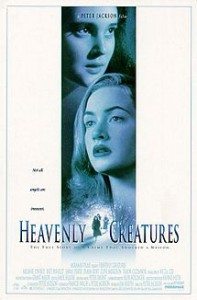 Before Kate Winslet was going down with the Titanic and Peter Jackson was making nine hour films about people with hairy feet, there was Heavenly Creatures. It’s about those darn kids, gosh darn ’em, and how their febrile little minds go the durnedest places. Like to matricide.

Juliet Hulme and Pauline Parker were real people, who lived in 1950’s New Zealand. Like a lot of girls (and boys) on the brink of maturity, they developed an especially intense friendship. They created powerfully real fantasy worlds for themselves to run amok in. Then their parents tried to separate them—for “their own good.” I’d ask you to imagine their pain, except Jackson does a brilliant job of doing that for you.

Watching Heavenly Creatures is like being young again, in that you remember exactly how crucial friendship can be, particularly if you were (or are) an outsider. You also remember how, playing with what reality is, you can lose track of your place within it. 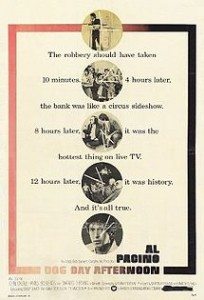 On August 22, 1972, John Wojtowicz and Salvatore Naturile held up a bank in Brooklyn. More or less, this is their story.

We do not watch heroes overcome great odds in Dog Day Afternoon. We watch small people stumble into the spotlight, uncomfortably and tragically. It is one of the most compelling stories I’ve ever seen and it is a start-to-finish brilliant film. Al Pacino and John Cazale are perfect.

While Frank Pierson’s script and Sidney Lumet’s direction take some liberties with the details of what really happened (large and small), they do so in a way that doesn’t elevate the characters—real people—beyond their recognizable humanity. No corners are smoothed over. No blemishes airbrushed out. Come see just how real things can get in the First Brooklyn Savings Bank during one of the dog days of summer, 1972.

If you watch Dog Day Afternoon, and don’t like it, you should probably ignore everything I say. This is what filmmaking should be.

So fine. I missed something important? You hate one of my choices? I’m a heathen for not mentioning Raging Bull and Lawrence of Arabia? All of the above? Let the comment ranting begin.

13 responses on “The 10 Best Biopics with Bite”