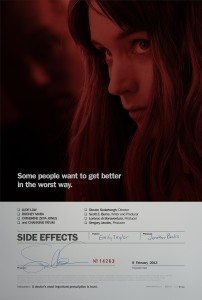 This week I was lucky enough to catch an early screening of Steven Soderbergh’s latest film, Side Effects. As regular readers will know, I’m a big fan of his.

But going into the screening, I knew remarkably little about this film. I’d seen posters and a trailer, which told me to expect a thriller starring Channing Tatum set amid the brambles of the pharmaceutical industry.

It turns out, not so much. Surprise!

Side Effects is a respectable little thriller, true. And the pills do get popped, particularly in the opening act when we meet Rooney Mara’s Emily, suicidally depressed and barely holding it together. Her recently released ex-con husband Martin (Tatum) has done time for insider trading and is looking forward to working his way back to a life of luxury. Emily appears unsure about this and everything else, including whether or not she wishes to exist at all. 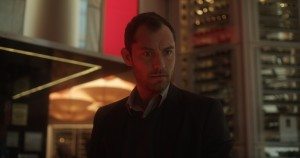 Into this scenario comes psychologist Dr. Banks (Jude Law) and vial after vial of prescription meds. So in the first act, we’re primed for disaster. This is, after all, a thriller. Disaster isn’t shy and arrives surprisingly early. Then the film swerves right and starts self-medicating heavily. It’s no longer about medication, it’s about machinations.

Are these themes contraindicated? Let me read the fine print…

What I find is an interesting question of side effects. How much of my positive reaction to this picture (and I liked it well enough) is a result of my affection for this director’s work? How would I feel about it if instead of regularly dosing myself with Soderbergh, I’d been mainlining Polanski? Would this tonic taste weak? Or if I’d been hooked on Wes Anderson, would Side Effects come on too strong, give me the shakes, a headache, and in rare cases, induce somnambulism? 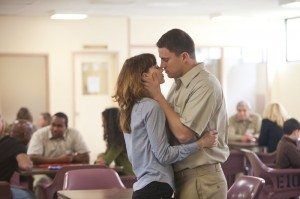 How much of our reactions to films can be attributed to our predispositions? These are the questions that concern critics.

Taking Side Effects solely on its own merits—without side effects—is impossible and probably boring. Isn’t it the critic’s personality that gives commentary value?

I can tell you that Soderbergh was having a good laugh with Side Effects, which is why I like his movies. He shot this film so that much of it mimicked a commercial for antidepressants. Here’s poor Emily under a cloud and then, swallow this, and you can practically feel the birds chirping as the breeze lifts troubles away. These images and moods mean something to us thanks to the shorthand of advertisers.

On the other hand, I confess that the story, by frequent Soderbergh collaborator, Scott Z. Burns, didn’t thrill me.

That’s not excellent for a thriller.

While there’s a ripe potboiler burbling away, smelling sickly of the eye-of-newt in the pharmaceutical industry, it gets left on the back burner. Side Effects instead evolves into a familiar type of story with familiar sorts of third act problems. These problems; they’re not fatal, or even uninteresting, they’re just familiar. 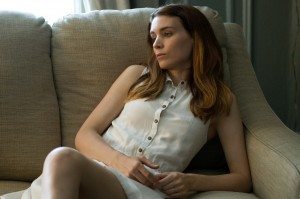 They’re the kinds of problems I’d bemoan if they happened in a Brian DePalma film so I must, out of propriety, bemoan them here.

I am not an addict. I can step away from Soderbergh whenever I want.

There are ways in which Side Effects works but I found myself more interested in the story this film wasn’t about. What does it mean to be dependent on a drug; what we can blame on the chemicals in our system; how and why do those chemicals get there: these questions are addictive.

Should we trust our doctors, the labs, the drug pushers? At what point are we no longer who we are?

If you want to think about these things, I’m with you. Don’t expect them from Side Effects though. It’s a reasonably clever crime procedural, but an unpretentious one. While I appreciated the lack of pretension in Haywire, I here felt shortchanged.

And that’s likely a side effect of loving Soderbergh. I know how high he can make me and regularly need a high dosage just to feel normal. This will prove problematic if he stops directing after Liberace, as he’s threatened to do.

Perhaps I should try to quit now and move on to cinematic methadone? I’m not sure what that would be?

Maybe I’ll take two episodes of Treme and call you in the morning.