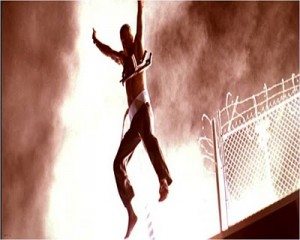 I get a kick out of you

As the roof of Nakatomi Plaza explodes in a red fury, a man leaps off the edge. The fire hose he’s tied to arrests his plummet with a hard slam against the windows of the lower floors. Beaten, bloody, and incinerated, the man kicks off with his lacerated feet. Before he can reconnect with the pane a second time, he fires his pistol into the glass. He smashes through with his damaged body, crawling his way into the decorative fountain. A falling helicopter explodes outside the now open window and flames clutch wildly. This man, John McClane, ducks down into the water.

I’m gonna ring-a-ding-ding you in the nose.

For a moment, the room has become Vietnam. For a moment, he is Bruce Willis. But once, originally, he was Frank Goddamned Sinatra.

That’s who the role of John McClane was written for. That’s who played John McClane before there even was a John McClane. And therein lies a story and this week’s Mind Control Double Feature.

First, let’s be honest. As much as you despise the fact that there is absolutely nothing but common sense and good taste to keep you from seeing the newest abhorrent Die Hard corpse raping sequel, A Good Day to Die Hard, you will shrug and give in and see it sooner or later. Hopefully while drunk and for a discount price. 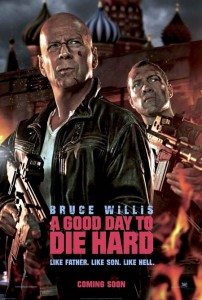 Yeah. I know. It’s going to be ghastly.

In order to delay your succumbing just a little bit longer, I offer you a substitute plan. Instead of watching this lousy, by-the-imaginary-numbers, feature-length advertisement that smears feces all over the memories of Hans Gruber and Joseph Takagi, let’s watch the Die Hard prequel you didn’t know existed.

Back in 1966, an author by the name of Roderick Thorp published a character-rich thriller called The Detective. It tells the story of a New York City private dick named Joe Leland who stumbles into a warren of ravenous corruption.

A couple of years later, this novel was turned into a film of the same name starring Frank Sinatra. A few bits were changed around—Leland is a cop instead of an ex-cop, for example—but it was a reasonably faithful adaptation. 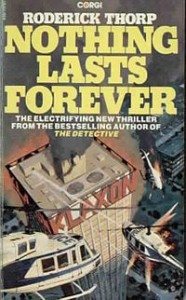 In 1979, Thorp wrote a sequel to The Detective called Nothing Lasts Forever. In this one, Leland goes to visit his daughter, Stephanie Gennaro, at the Klaxon Oil Company headquarters. Stop me if you’ve heard this before, but she’s attending the company Christmas party when terrorists seize the building—and who’s left to fight them off but Joe Leland, the proverbial fly in the ointment.

Nothing Lasts Forever, of course, was turned into Die Hard. Originally, though, the hope was that Sinatra would reprise his role from The Detective and play McClane né Leland. That didn’t happen. Sinatra passed. The script also didn’t get developed into a second Commando film for Schwarzenegger to lumber through, but they tried that as well.

Nope. It got changed around some and it became Die Hard, a film that created an entire sub-genre of action movies and made you take Bruce Willis as seriously as a human being can take Bruce Willis.

The name Joe Leland may have become John McClane, but it’s the same character based on the work of the same author. And if you watch The Detective and Die Hard back to back—like you’re going to do right now—you’ll see more than a few similarities.

You’ll also watch all of Die Hard transposing Frank Sinatra’s face over Willis’ and that is just plain weird. 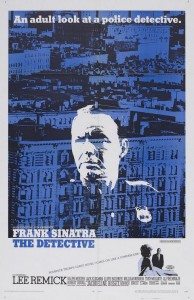 When I watched The Detective this weekend, I kept waiting for the film to kick into gear. It was only about half way through that I realized that it wasn’t going to be the film that I expected; it was going to be much better.

Normally, you watch a detective picture and it follows a standard sort of plot arc. There’s a crime. A cop of some variety steps forward to solve it. There are complications. Then, hooray!, the crime is solved and everyone gets a donut. That’s not gonna happen in The Detective so refocus your brains right now.

In this film, there’s a crime, sure. There are even a couple of crimes. A cop—the bull-headed Inspector Joe Leland—gets assigned the case but instead of focusing on his hunt for the killer, we focus on other things. We slip into flashback to watch his new marriage run aground when his wife, Karen (Lee Remick), struggles to find herself worthy of being loved. We see Joe buck against departmental politics, eschewing promotion opportunities and expediencies in favor of his unbending but reasonable morality. There are some things that a man like Joe Leland can’t accept; corruption, infidelity, greed. What’s one conviction mean compared to your lifelong conviction? 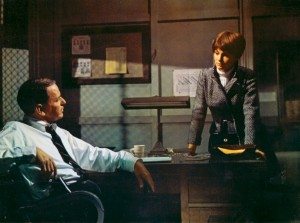 Jacqueline Bisset needs your help. You will say yes.

But the case, involving the gristly murder of a high society heir—a gay man in the much less tolerant ’60s—brings out the worst in those around Joe. We flip back and forth through time as our protagonist tries, not to put the pieces of the case together, but the pieces of his personality.

That’s what’s intriguing about The Detective. Sinatra, in a skinned-knuckled performance, investigates himself. What we get is a full psychological workup on the man who became John McClane. Leland may not be exactly the same character as the one Bruce Willis plays, but the roots are there. You can see them in the way Sinatra responds to orders. And in the way Willis focuses his concern on hostages, not on property or protocol.

The Detective is the kind of film that surprises you. It’s not a brilliant piece of cinematic history, and the surprises are gentle ones, but there’s meat in the script and a handful of players worth keeping your eye on. Ol’ Blue Eyes is backed by Jack Klugman, Jacqueline Bisset, Robert Duvall, Lloyd Bochner, and others. There are no terrorists and no explosions, but there are also no villains and no heroes, so I think it comes out about even.

Sure, it’s loose around the edges and occasionally blunt, I liked it. I liked Sinatra and liked getting to know Leland. Even without seeing this latest Die Hard sequel I am willing to guarantee that The Detective is a better film, and more connected to Die Hard, than A Good Day to Die Hard will ever be.

You’ve seen Die Hard a billion times. Now watch it again because it’s awesome and because you just watched The Detective.

Hans across a hard body

Weird, right? You can almost see the ghost of Frank Sinatra following along in Bruce Willis’ footsteps. Some of the things McClane says—such as when he fights with his wife early on—evoke the earlier incarnation of the character. The way McClane is tough without sacrificing his concern for people on a personal level.

And the way Willis recorded his lauded 1987 album, The Return of Bruno; that too is reminiscent of Frank Sinatra. 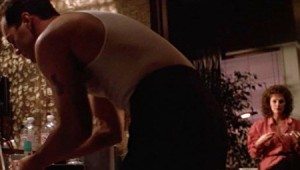 But you didn’t miss my name, did you?

While in Nothing Lasts Forever Leland is visiting his daughter, not his wife, I’m going to go ahead and say that Bonnie Bedelia’s Holly Gennaro is the same character as Lee Remick’s Karen Leland. There. I said it. It’s on the internet so it must be true.

At least it looks like she’s gotten a handle on her fidelity issues. Ellis will have to enjoy Christmas eve on his own. Oh no, wait. He can’t. He’s dead.

There you have it. More Die Hard to watch without supporting a film in which our tough, everyman hero blows up half of Russia with little regard for anything but how a special effect plays out.

You ask for miracles? I give you Frank Sinatra.