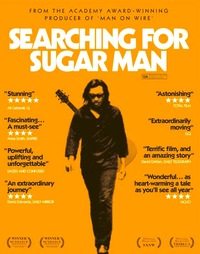 I finally saw the documentary Searching For Sugar Man, the hit from Sundance ’12 that just took home an Oscar last week. I liked it, and I can see why word of mouth spread about it the way it did. I also think it brings up some issues with regards documentaries and how we watch and think about them as works of art.

The best thing about the movie is the artist everyone is in search of, Sixto Rodriguez (one of his songs is called “Sugar Man”). He made two albums in ’70 and ’71 that inexplicably sold about six copies each in the States. His voice is incredible. The music is folk meets rock with a hint of psychedelia. His attitude is that of a Buddha. Was it his Latin sounding name that scared off listeners? Who knows. I’m happy to have seen the movie simply to have been turned on these two albums, Cold Fact and Coming To Reality.

That the movie acts as a means for the world at large to be introduced to this great artist, even if his recognition comes 40 years late, is a huge mark in its favor. If you don’t already know the gist of the story the movie tells, it’s that while Rodriguez was ignored in the U.S., his records found their way to government controlled, culturally oppressed apartheid South Africa, where they were beloved to the point of worship. No one knew a damn thing about the man who made the music. Rumors were rampant that he’d killed himself on stage in the ’70s. He was a legend. In the late ‘90s, a few curious fans decided to see what the real story was. They discovered Rodriguez was alive and well. They invited him to come to South Africa and play some shows. He did. Thousands of adoring fans came to see him. 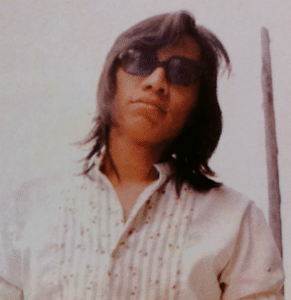 Sixto, back in the day

The scenes of his ’98 concert are intensely moving. To see this soft-spoken, easy-going musician, who spent his life working construction in Detroit, come on stage and play to these people who revere him more than Elvis is a beautiful thing. His three daughters talk about the experience close to tears. They had no idea their father was a famous rock star. Their father didn’t know either, but he seems to roll with it like it was all part of the plan.

The thing about documentaries is that, as with Searching For Sugar Man, if the story they get their hands on is powerful enough, it hardly matters how good the movie is in an artistic sense. Few docs reach the heights of, say, Errol Morris’s The Thin Blue Line, where not only is its artistry amazing, but its existence also frees an innocent man from death row. Sugar Man didn’t impress me much in its making. It’s a fairly pedestrian documentary, saved by its subject.

At least that was my first impression. Then I thought about it more (a dangerous and troubling habit of mine). The movie is purposefully confusing as to time. From what I’d heard about it in advance, I was under the impression that it was the film and the filmmakers who were making this search for Rodriguez. They aren’t. The movie tells the story of a search made in ’98 by South Africans. But during the first half of the movie, this isn’t clear at all. 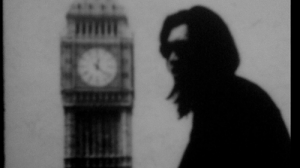 one of the few early photos of Rodriguez

We see interviews with the producers of Rodriguez’s two albums. Both speak as if Rodriguez is a mystery man lost to time, who after the failure of his albums vanished. Next are interviews with the distributors of his albums in South Africa, who think Rodriguez is dead and send royalties to companies in the U.S. Only they sound very vague about this. Turns out they sound vague because their interviews have been edited to suggest that this royalties mystery is a current one. Of course it isn’t, we later piece together. Rodriguez was found in ’98. Or maybe despite that they still didn’t bother with royalties? I have no idea. Then they interview the hilarious chairman of the company that released Rodriguez’s first album, Clarence Avant, who also used to run Motown. He’s foulmouthed and totally baffled at the inane questions he’s being asked about Rodriguez and the money owed him. This “following the money thread” is then quickly dropped. As well it should be. Since Rodriguez was already “found” in ’98. 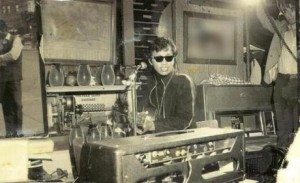 So okay, finally we meet Rodriguez. The filmmakers interview him for about 30 seconds of screen time and ask him leading questions he has no idea how to answer. Things like, “Your life would have been so much better if you’d been a superstar. How does that feel?” Imagine how much better this would have been if someone empathetic like Werner Herzog had conducted the interview. Instead that’s the last we hear from Rodriguez directly.

The movie, then, is specifically recounting how two South Africans sought out the real story of Rodriguez in ’98. There’s no search made by the documentarians. Which they purposefully gloss over in order to give the movie a feeling of immediacy. A rather cheap trick, that.

Being still more curious about Rodriguez, I looked him up on Wikipedia. Turns out he was loved in other countries too, including Australia, where he toured in ’79, resulting in a live album called Alive, a joke on the rumors of his death. He toured there again in ’81. 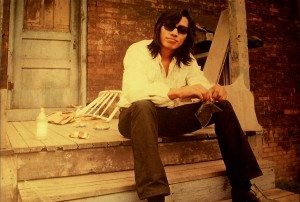 the photo for his second album

None of that is included in the doc, for obvious reasons. It would make his having “vanished” seem less impressive. There are plenty of reasons not to include everything about a  subject in a movie; after all, you’ve only got so much time. What I find dishonest about Searching For Sugar Man is the way its omissions are all made in order not to tell the real story, but the story the filmmakers want to market.

But then again, the story they want to market is: “There’s this amazing, influential artist out there you’ve never heard of. Listen to this!” Which is wonderful. I’d still recommend the movie. Being introduced to this artist, seeing what it’s like for him to find belated fame on stage in front of thousands of fans, hearing about the impact he had on South Africans in the ’70s and ’80s, these things make it well worth your time. Stepping back further, it’s great that the movie was made at all. Rodriguez is touring everywhere now and will likely have his first new album in 40 years coming out soon. He’s finally famous in his home country. That’s an amazing real world impact for a movie to have. 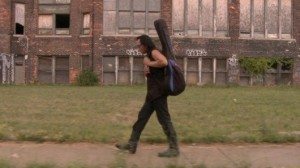 And that’s the weird thing about docs. I’ve got issues with the movie-making aspect of this one, yet those are outweighed by what it accomplishes. So is it a “good” movie? A “great” one? A “bad” one? Is it okay to finesse and elide the truth in order to more easily make you fall in love with an artist deserving of your love? You tell me.

4 responses on “Searching For Sugar Man: How To Judge Documentaries?”