Sometimes, you think up a headline for a blog post and you just have no choice but to use it. Also, sometimes (always) you are given the opportunity to see a movie in which William Shatner is attacked by rampaging giant spiders and you buy a goddamned ticket. 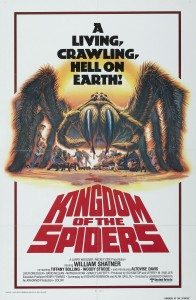 Like I did this Sunday at the New Parkway Theater in beautiful and safe Oakland, California.

We are talking about Kingdom of the Spiders, people. If you are not aware of this benchmark in attacking insect films, hang onto your hats and board up your windows, ’cause it’s raining tarantulas and they’re pissed.

Why are they pissed? Who cares. This is a film STARRING WILLIAM SHATNER.

Okay. So first off, this event—and credit where it’s due—was entitled Shatfest and yep, that’s what it was. I see myself spending a lot of time at the New Parkway.

First we got to see the Shat’s stunningly brilliant interpretation of Rocket Man and then, as if that wasn’t enough, they screened Richard Mattheson’s Twilight Zone episode, Nightmare at 20,000 Feet, which of course, stars William Shatner shooting a gremlin off the wing of his jet. You may be familiar with this story as it was remade as part of the Twilight Zone film. Or you may be familiar with it because it is awesome and then dipped in extra awesome sauce as in it Shatner acts like someone who is not crazy but whom everyone thinks is crazy.

It was a role he was born to play.

And then, so tenderized by the opening shorts, we screened the main feature: 1977’s Kingdom of the Spiders.

This is the second worst first date I’ve ever been on. 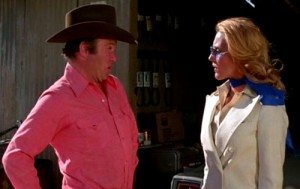 Let me tell you a little bit about this gem. First, William Shatner plays a Lothario country vet who romantically refers to his sister-in-law as a cow. Second, environmentally aggrieved tarantulas start attacking farm animals and people because they’re hungry, or pissed, or something. It’s hard to say. They’re spiders. We actually get the line, “This is our home and no damn spiders are going to run us out!” 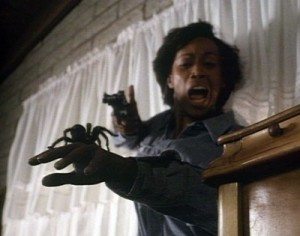 This is precisely why I only have three fingers and half a spider.

But then, I’m pleased to say, the spiders run everyone out. Or at least they run one proprietor off the road and cause the other to shoot her own hand off because, you know, spiders. And we’re just getting started.

Shatner’s character, Rack, takes time away from making unappetizing kissy-faces at attractive spiderologist Diane (Tiffany Bolling) to try to defend sleepy little Verde Valley but some things are even beyond the power of the Shat. One of those things is about 5,000 tarantulas. Which, by the way, were all real and purchased at $10 a pop from Mexican spider hunters. One can only presume that 1977 was a great year for Mexican spider hunters.

Can I get a Mexican Spider Hunter t-shirt? Because I would totally wear that.

I know what you’re asking. You’re saying, uh, why didn’t the residents of Verde Valley just put on some boots and have a little stomping party? That is a good question. The answer is also satisfying: it’s because they were too busy making soup. Which is what anyone does when a rampaging horde of vicious tarantulas forces you and your guests to barricade yourself into your guest cottage. You make soup. To eat. Or to throw at spiders. Either way.

Wave your arms in the air like you just don’t care.

Look. You’re missing the point. This is a movie in which spiders attack William Shatner. And I don’t want to give anything away but they win. The spiders fucking win. If you have a favorite movie ending and it’s, I dunno, Roy Batty pushing a nail through his hand and giving a speech about Tannhauser Gate or Harry Callahan tossing his badge into an industrial pond, screw yer damn head on and watch Kingdom of the Spiders.

I would like to be clear that pretty much everything about this film is terrible. The story is like the aborted love child of Jaws and The Birds but with none of their subtlety or style. The best actor in the film is the cow at the beginning who does a good combination “ahh spider!” and “I can’t believe my agent got me into this” expression. The music sounds like they recorded everything off the television—because they did; it’s all stock stuff from The Twilight Zone and other shows. 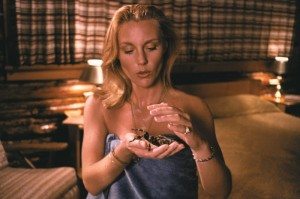 I’m hot, naked, and petting a spider. So is Tiffany Bolling in this picture.

Interestingly, the Rocket Man link that you really should have clicked above comes from ’77s Academy of Science Fiction, Fantasy, and Horror Films award ceremony, where Kingdom of the Spiders was nominated for Best Horror Film. Unfortunately, it lost to a film in which Martin Sheen tries to get it on with a prepubescent Jodie Foster.

Granted, that does sound pretty scary.

Also of interest is a name hidden in the Kingdom of Spiders credits. This film was edited by one Steve Zallian, a guy who went on to write a whole slew of successful films, one or two of which I actually like (Searching for Bobby Fischer, and, uh, Moneyball? Yeah. I guess I liked Moneyball). I think you can see shadows of his writing style in the editing here; the way he cuts to spiders sort of ambling around the driveway to create a sense of terror, for example, is a lot like his work on Gangs of New York.

In closing, I’d just like to say this: William Shatner attacked by spiders. Amiright? Yeah. I thought so.