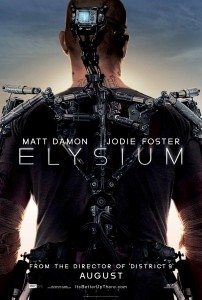 In a fabricated future world like Elysium‘s, making up facts and defending their veracity without a drop of supporting data is perfectly acceptable. That’s a fact.

It’s also a fact that if you build a grandiose world without any foundation, you end up with Babel. In Neill Blomkamp’s vision of dis/utopia — the film Elysium — there is an oil-slick sheen of rainbow magic that catches the eye. Underneath that, it’s mostly dead fish and stuff that won’t wash off no matter how hard you scrub. I’ll explain while I introduce the basics of the story.

It’s the year 2154 and Earth is well screwed. Almost everyone lives in a vast slum that somehow continues to operate despite the lack of any noticeable upper or middle class. There are robot cops who shake down folks waiting in line for the bus, but no one to stop military-grade warfare when it breaks out on the unpaved streets. Satellites can immediately identify individuals from space, but a man can hide underneath a pig cart and avoid capture. Up in the sky, an orbital space station houses the super rich 0.1%, who have recreated San Diego in 1998 and given everyone a machine that deletes your cancer or rebuilds your entire face in under a minute. 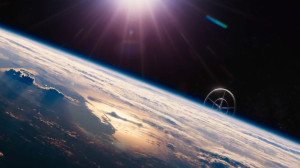 Hooray! Stargate is back!

This orbital, called Elysium, is run by a five-person governmental body run by a President (Faran Tahir). These representatives hold office because the central computer knows they do. If you tell the ‘mainframe’ that someone else is President, well then heck, the robot cops who aren’t really around on Elysium anyway will enforce that and who’s going to say boo?

With Elysium, Blomkamp has set up a facile analogy to today’s class warfare in which the rich get richer while the poor eat shredded plastic bags and die of hangnails because they can’t afford expensive pharmaceuticals. Having set the analogy up, he then spends a lot of energy and money designing cool weapons and staging action sequences. He doesn’t bother with any nuance and, as a result, his film only works on the lightest, most intangible level.

If we don’t believe in a world, nothing in it can make us care. While Blomkamp’s first feature, District 9, was an impressively brutal pummeling of the senses — including empathy — this one’s well off the mark. And that’s another fact. 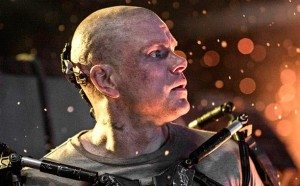 From the opening scenes of Elysium, we see the future Earth presented in fairy tale — or fairly stale — style. It’s broad strokes of young orphan Max (not yet Matt Damon) and his wee sweetheart Frey (not yet Alice Braga) dreaming of the idyll in the sky. Max promises Frey he’ll take her there someday. His antisocial behavior is tempered by the kindly nuns who tell him that one day he’ll do something special.

Oh. Sure. I don’t any reason see why an orphan stuck on a whole planet full of miserable fucks wouldn’t believe that he’s destined for greatness because some random slum nun told him so. It’s this kind of stuff that drives me crazy in films. First off, it’s so cliché it actually hurts. Secondly, you might as well just show us the last scenes first and spare us the exposition. Not that we have any doubt that Matt Damon will somehow liberate the billions of Earth-bound suckers within two hours, but can’t that be allowed to happen without a nun sherpa leading the way? 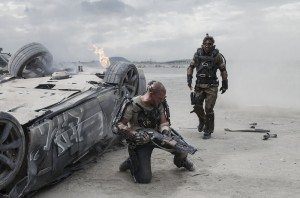 Be still, my dog of war. I understand your pain. We’ve all lost someone we love. But we do it my way!

I see that I’m being rough on this film, though. The truth is that it wasn’t all bad. It just wasn’t much good either. Neill Blomkamp has made an unchallenging film that looks swell. It has some message — share the wealth — even if that message is trite and delivered in an unconvincing manner.

On the good side, the production design team has come up with impressively interesting future weapons for you to gasp at. On the bad side, Jodie Foster plays Elysium’s Defense Minister, Jessica Delacourt, as if she’s applying for an entry-level opening at Blofeld Industries. Lacking qualifications, she makes up an accent that’s half Cary Grant and half Twiki from Buck Rogers. It’s unclear why Elysium has a Defense Minister, anyway, since they seem to have no defense against incoming missiles or shuttles or asteroids or solar radiation. They’ve just got a handful of robot cops who answer only to the central computer; Sharlto Copley as a plainclothes, Earth-stationed psychopath with a magic rocket launcher; and a lot of tennis courts.

It’s a fact: tennis courts are not a great component of interstellar defense strategies unless you can force your opponent to serve his or her grenades into the net. 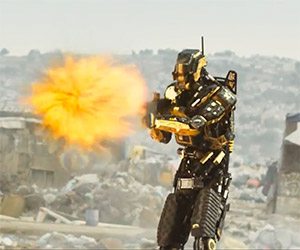 You have 20 seconds to comply. Screw it. Counting is for suckers.

Elysium’s first act is the best. We follow Max through his life as a factory worker. He’s a reformed thief who just wants to get along. Naturally, everything goes wrong in ways that don’t really make a whole lot of sense. He wises off to a robot cop and gets his arm broken and his parole extended — as if he’s been unable to learn how unforgiving robots are over a 30 year span. An industrial accident — that only a complete and utter fool would have exposed himself to — hands him a death sentence and radiation sickness. If he can only get to Elysium, he can survive!

That’s about when I stopped caring. What does it matter to me if Matt Damon’s character lives? He’s nothing to nobody. Even Frey doesn’t want to trouble with him any more. I know how she feels. Best case scenario, Max will convince underworld space coyote Spider (Wagner Moura) to get him to Elysium so he can be cured in a medi-bed. Then he’ll be arrested and be back where he started, except in prison. Or who knows, maybe they’ll just tell the medi-bed to put the radiation poisoning back in him? Or turn him into a half-Sasquatch, half-mermaid thing and let him go?

Like with everything else in Elysium, the plot only makes sense as long as you refuse to think about it. Is that a fact? I don’t know — I can’t think about it. 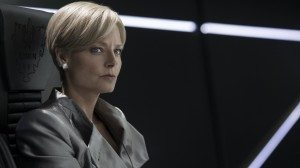 Clearly spending too much time with Mel Gibson

Luckily, things get more complicated so your willingness to think gets hijacked. The excellent William Fitchner plays a military-industrialist, John Carlyle, who has the keys to Elysium’s central computer. Jodie Foster gets him to program a patch that will make her President so she can continue to have psychos blow refugee ships out of the sky. You’d understand why if you had children. That’s what Secretary Delacourt tells the President at least. Not having children, I don’t understand.

Max attempts to steal Carlyle’s brain for Spider. Carlyle’s brain data, including the treasonous patch, is protected by a fatal piece of encryption that allows anyone who wants to read the code to do so without hindrance but which makes it impossible to download the code without killing the person who its stolen from. You may question the wisdom of such a piece of security, but that only means you’re thinking. 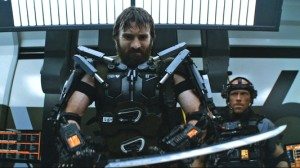 The most effective way to stop a space craft in flight is to use a sword.

You may also wonder why Max just doesn’t have his brain hard drive removed and then let Spider try to download the code, but again, you don’t have children. If you had children, you’d understand.

Here’s the thing. If you want to see some cool gunfights, Elysium has you covered. Otherwise, I can’t really recommend you see it. While it may be hard to imagine that the director of District 9 can make $100 million sci-fi spectacle that’s dull, that’s what he did. It won’t hurt you. It won’t offend you. It also probably won’t really interest you, either.

And that’s a fact.