Family man loses grip on reality on extended Disney World vacation, leers at girls, imagines park blowing up. No doubt it happens on a daily basis, but good luck filming it. The Disney police would swoop you up, disintegrate you, and blast your remains into space—or Space Mountain—if they spotted you with a camera and a crew. 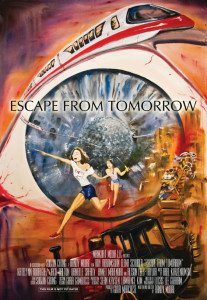 Unless you are very clever. As you’ve no doubt heard, first-time director Randy Moore is very clever. He managed to shoot Escape From Tomorrow at Disney World, Epcot Center, and Disneyland without getting caught. How’d he do it? It was shot on consumer digital SLR cameras, so the cameramen wouldn’t look suspicious. The actors wore radio mikes in their shirts. No lighting but the natural was used. They shot in monochrome black and white. They rehearsed in hotel rooms. For certain scenes, the actors rode rides twenty times in a row or more. Moore says Disney security only bothered them once, when they imagined Moore was harassing a celebrity family by following them around the park all day. Actors had the freedom to just be observed in the world of Disney, but faced the challenge of interacting with non-actors unaware they were being filmed.

In one scene, the mother of the family slaps their young daughter and storms off. The father holds the girl and tells her mommy didn’t mean it. The camera whips over to a man watching with a stern expression. I assume he wasn’t in on the scene.

Escape From Tomorrow premiered in great secrecy at Sundance. “Disney” was not once mentioned in the press materials. The first screening was far from sold out. All subsequent ones were packed. Would Disney swoop down on the festival and prevent further screenings? They didn’t. Could the film possibly be released? Turns out it could. 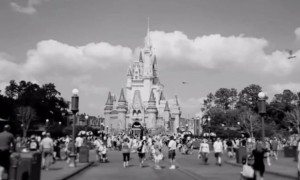 The legal issues are murky at best. Murky enough that Disney has made the wise choice to do nothing but acknowledge their awareness of the movie. Had they attempted to legally suppress it, it would have given Escape From Tomorrow a huge profile. It’s already being called the ultimate guerrilla movie, so imagine if it was illegal to screen it. It would become famous—the little movie that Disney Corp. stepped on! And people would see it anyway. It would leak out all over the internet like a punctured colostomy bag. One might say. People who’d otherwise have no interest in it would search it out, just to see what the big deal was. 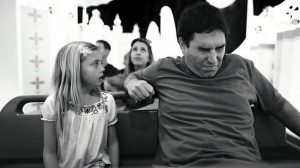 Dad always cries on this ride

It’s not that a big of a deal. Disney, bless their tiny, blackened corporate hearts, recognized this. Their decision is to ignore the movie and wait for it go away. Which, thus ignored, it will. A crowd-pleaser it ain’t. Frankly, as a weird, subversive cult flick for film nerds, it’s but a middling effort. Worth seeing? Absolutely. It’s compelling enough to keep you watching, even if it doesn’t really come together with any deeper meaning. It’s no deeper than a poke in the eye of Disnified “entertainment” with a sharp stick.

In short, what will be Escape From Tomorrow’s tiny audience is not the audience for the actual Disney theme parks. 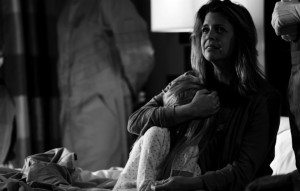 The most subversive element of the movie is where it was shot. The fact that you’re really looking at Disneyland/World, shot in eerie black and white, is reason enough to see it. Roy Abramsohn plays Jim White, married to Emily (Elena Shuber), with two young kids, Sarah and Elliot. In the first scene Jim’s fired from his job over the phone. He doesn’t tell Emily. He wants one last fun day on their Disney World vacation. So off to the park they go.

Jim begins having strange visions on one of those slow boat rides where weird characters laugh maniacally and the music never stops. Very similar to the Itchy & Scratchy Land episode of The Simpsons where Lisa drinks the fetid water and hallucinates psychedelic horrors. Jim spots two hot French teenage girls, and manages to follow them all day, lusting after them helplessly, kind of like Chevy Chase in Vacation, but with a pedophiliac edge. Fun times! Helping it all along is the original score, a sort of flashback to joyful music of a past era that clashes nicely with the hellscape of amusement on display. 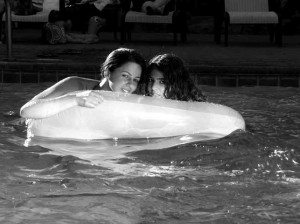 In the latter half of the movie, Jim’s visions grow massively weirder. He’s abducted by Disney police and taken away for brainwashing and whatnot. Seems he’s been spreading cat flu. It all ends badly.

Is it all in Jim’s head? No such explanation is given. Things just grow weirder and darker, and then it’s over. There’s not much in the way of pacing in here, nor is there any real build to the weirdness. It just starts happening. And continues. We are left to presume that regardless of anything going on with Jim—and really all we know is that he was fired—the inherent sinister evil of Disney has driven him over the edge. 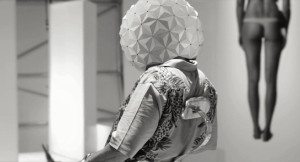 Dad comes down with a severe case of Epcot Head

The is far from The Shining or Eraserhead. There’s no building dread, no psychological torment, no vertiginous descent into the subconscious. It’s just a man breaking down with increasingly out-there visions. Which there’s nothing wrong with that. It’s all off-kilter enough that you want to see what happens next, even if what happens next has no emotional through-line. It’s just that, by the end, you’re left with little to say other than, “Well, that was weird.” 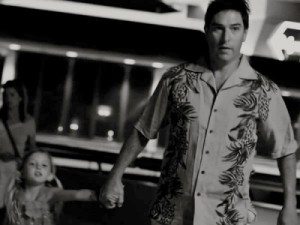 You can’t escape from tomorrow.

It may be that Escape From Tomorrow suffers from imagining itself darker and more transgressive than it really is. Jim may lust after underage girls, but he never acts on his fantasies. It’s suggested that his unsatiated lust for the girls is what drives his downfall into loopiness, so maybe there’s something in that? Something about Disney representing youth? And this is the dark side of it? Hard to say. Maybe we can come up with a thematic connection to Spring Breakers and its use of ex-Disney child stars as salacious temptresses and criminals. A new trend? A backlash against corporate “joy” and “innocence”? Disney corrupting youth and by extension the rest of us? Surely there’s a weighty, sociological New Yorker article in there somewhere.

Meanwhile, hats off to Randy Moore for pulling this little prank. Whatever the film’s failings in terms of characterization and story, it’s still a demented movie filmed on the sly inside Disneyland. With any luck, we can expect more and better movies filmed where they shouldn’t be. Says Moore of his filming technique: 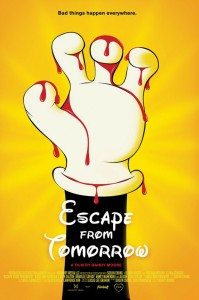