It will come as no surprise for you to hear that Indiana Jones and the Temple of Doom is the sequel to a vastly popular adventure film. That film, of course, is the 1939 George Stevens picture, Gunga Din.

Except for Harrison Ford playing a character named Indiana, there is practically nothing but a few stylistic elements to connect Temple of Doom to Raiders. Their dissimilarity comes into focus when you watch Gunga Din and Temple of Doom back to back, like you’re going to do for this weeks’ Mind Control Double Feature.

Damn it’s good to be a gangster. Unless that means pulling someone’s beating heart out of their chest, because that can get really messy. 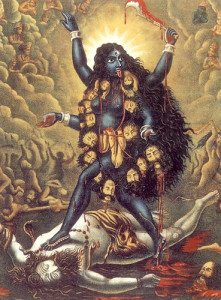 But one does what one’s cult demands, and if one is a Thuggee, one’s cult ostensibly worships Kali — the Hindu goddess of time, death, and violent change. According to Hollywood, being a Thug means you just gotta kill everyone you can lay your pick-ax into.

Naturally, this malarkey doesn’t have much to do with actual fact. The Thuggee came into being in India, where they were known as thieves and assassins for a few centuries. They would join caravans, come to be accepted as traveling companions, and then strangle everyone and make off with the loot. In the 1830s, the British rulers of India wised up and eradicated the Thugs.

If the historical Thuggee had religious beliefs, they were of debatable import. Many of those arrested as Thugs were Muslim, not Hindu, so devotion to Kali is questionable. While some claim that the sect killed to attempt to forestall Kali’s human-obliterating wrath, other historians think they were just a band of scoundrels, or even revolutionaries targeted by the British to protect their control over the country.

Whatever the truth about the Thuggee, how you imagine them and their motivations will color your impression of Gunga Din and Indiana Jones and the Temple of Doom.

So I’ll meet ‘im later on
At the place where ‘e is gone —
Where it’s always double drill and no canteen;
‘E’ll be squattin’ on the coals
Givin’ drink to poor damned souls,
An’ I’ll get a swig in hell from Gunga Din!
Yes, Din! Din! Din!
You Lazarushian-leather Gunga Din!
Though I’ve belted you and flayed you,
By the livin’ Gawd that made you,
You’re a better man than I am, Gunga Din! 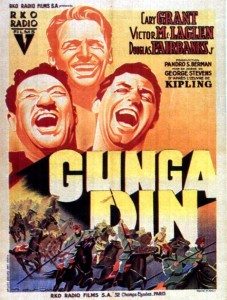 Rudyard Kipling’s poem Gunga Din (pronounced “deen” not “din”) isn’t a rollicking adventure. You’d be hard pressed to find laughs in there. So if you think screwing up adaptations is a modern Hollywood thing, wake up and smell the Lazarushian leather.

The poem, written in 1892, tells the story of a British soldier who mistreats an Indian servant, only to have the servant — a bhisti, or water-bearer — turn around and save his life by sacrificing his own. In the aftermath, the soldier realizes he’s the savage instead of Din; that “You’re a better man than I am, Gunga Din!”

Naturally, the best way to make this lamentation into a film is as a screwball comedy. All you need to do is add a vast treasure, a love interest, a blood-thirsty cult, and hang the fate of the Empire in the balance. 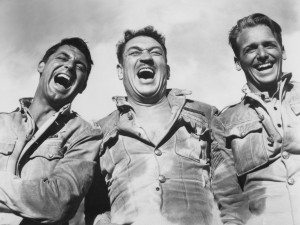 The film Gunga Din starts with a trio of rambunctious British soldiers in 1880s India. You’ve got Cary Grant as Archy, the fortune hunter; Victor McLaglan as Mac, the career soldier; and Douglas Fairbanks Jr. as Tommy, the love-besotted sap who’s going to go civilian, get married, and open a tea shop — much to the horror of his mates. Then a mysterious group of villains knocks out some telegraph lines so Archy, Mac, and Tommy are sent to investigate.

Wouldn’t you know it, those dang Thugs have reemerged after 50 years of quiet to once again raise hell. 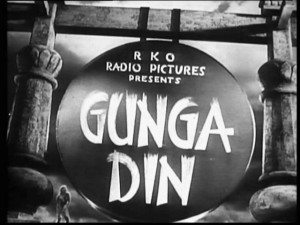 Hm. What other film starts with a gong?

That’s only the start of the film’s plot, but it’s enough for a couple of set-piece action scenes and a steady stream of cut up humor. Watch Mac feed tonic to his favorite elephant! See Tommy almost get blasted by dynamite! Experience Archy’s lackadaisical approach to military comportment! You’ll laugh, you’ll thrill, you’ll question the dated sense of ethnic sensitivity!

But no, really. Gunga Din is a hell of a lot of fun. Don’t think 1939 and roll your eyes. This is one of the best years for film the world’s seen: The Wizard of Oz, Gone with the Wind, Stagecoach, Mr. Smith Goes to Washington… all these pictures and others like them kept theaters crowded throughout that year. While some older films don’t hold up well, Gunga Din remains perfectly enjoyable and only a little dated in terms of its swashbuckling style. 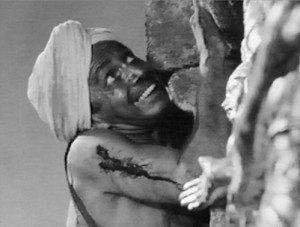 Back in India (or really the Sierra outside of Bishop, California), our heroes barely escape from the Thugs with their lives. Although Tommy is days from leaving the army, the three shenanigan their way into one last assignment together. They head off with a battalion to restore the telegraph service and defeat the Thuggee. Along for the ride is Gunga Din (Sam Jaffe), who dreams of being a solider, and happens to mention a temple made of gold to Archy. Perhaps you can see where this is heading?

You are correct sirs and ma’ams; the temple of gold ends up being a temple of doom! Yoiks! Whosever will be available to give these pesky native upstarts a good what-for and polish off this spot of bother for our heroes? 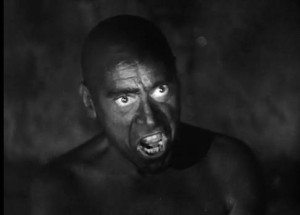 Here’s what you need to know about Gunga Din to understand why Temple of Doom is so desperate to get in its pants: 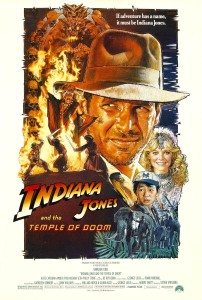 Re-watching Temple of Doom recently made me feel funny. I had first seen it in the theaters, when it came out, for my 12th birthday. Back then, it was non-stop adventure and on the edge of gruesome horror. Now it’s all a joke.

Literally: from start to finish, Temple of Doom is a screwball comedy with some action set pieces to connect the dots — just like Gunga Din. It’s enjoyable and made with style, but it isn’t anything like Raiders of the Lost Ark.

Raiders was a tightly scripted adventure story about an archeologist. Indy may be down for adventure in Raiders, but he’s no fortune hunter. You’ve got a story that plays out creatively but sensibly. You’ve got Karen Allen as the love interest, a woman who’s smarter and more capable than you, and able to drink you under the table, too. You’ve got Nazis and supernatural elements no one can explain and bad dates. There are a few comic moments, but thrilling is the name of the game.

There’s a reason why everyone loves Indiana Jones and that reason is Raiders of the Lost Ark.

Why then did Spielberg and Lucas so wildly change tacks for Temple of Doom? 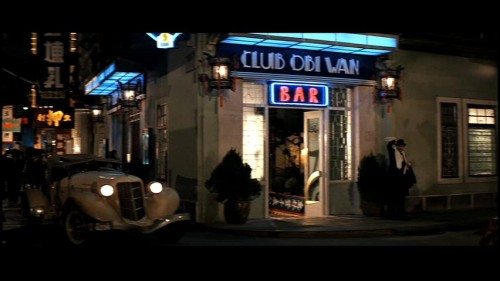 Doom takes place a year before the events of Raiders, in 1935. At this point, Indy isn’t a professor or respectable. He’s the sort of guy who digs up priceless relics and sells them to dodgy men of power, like Lao Che (Roy Chiao). Our film starts in Shanghai, with the pitiable Kate Capshaw as Willie Scott singing and hoofing to “Anything Goes” in Shanghainese. In this very first scene, we get a nice swallow of exactly what this film has in store for us.

First off, it’s impossible to tell whether Kate Capshaw is any good or not, as the part written for her was deliberately made to contrast with Karen Allen’s Marion Ravenwood role: meaning it’s horrible. Willie Scott is a screeching, conceited millstone. She leads a troupe of Busby Berkeley style dancers through a club number that somehow — before the credits even end — steps outside of the time and space of the club to a massive sound stage so they can spin in sequins in sequence. Then the dancers pass through a dragon’s mouth to return to the club.

Any excuse for a picture of Karen Allen.

Who could love such a woman? Well, Steven Spielberg. He married Capshaw after meeting her on Temple of Doom.

But the comedy: watch how this film takes what you’d expect to be a straight-forward action scene and turns it screwball. In Club Obi Wan, Indy attempts to swap the unearthed ashes of a dynasty founder for a large diamond. There are guns and flaming skewers and even poison, but there’s no tension, only hijinks. 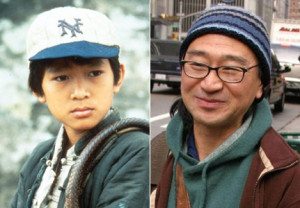 This is largely like the tone of Gunga Din. Even in the face of danger, we smile and laugh. Unlike Gunga Din, however, these action scenes don’t even make sense within the context of a screwball adventure picture. Note that neither Indy, nor Lao Che, nor Willy leave the club with the large diamond, which has seemingly been abandoned on the floor in the midst of spilled ice. Never mind that, though, as we’re already onto the next comic action sequence, in which Indy’s child bodyguard, Short Round (Ke Huy Quan) drives Indy and Willie to escape via the airport.

Why Willie sticks with Indy or why Indy drags Willie along after he retrieves the antidote from her cleavage is unclear. Never mind that though, as we’re already onto the next comic action sequence in which the pilots — working for Lao Che — decide, instead of just shooting the sleeping Indy, to fly him all the way to the Himalaya where they then parachute out and dump the fuel, forcing Indy and the gang to bail out using a life raft as a makeshift parachute as the plane explodes against the mountains. Why destroy an expensive airplane? Never mind that though, as…

Wait. Can we go back to the picture of Marion Ravenwood, please?

Well. You get the picture. For the run of Temple of Doom, you enjoy yourself enough to miss asking the basic questions that make this film clash with Raiders. Why does anyone do anything? How is what’s happening logically or physically possible? Do people really eat snake surprise?

If you’ve just watched Gunga Din, however, you may find answers to all your questions. Indy is a rogue and fortune hunter because that’s what Archy was — and audiences loved Archy. The Thuggee cult is religiously devoted to Kali and blood, because Eduardo Ciannelli was so stunning as the Guru in Gunga Din. In Doom, Amrish Puri’s Mola Ram is clearly modeled on this villain, even appearing like him.

How can pulling people’s hearts out be wrong? He looks so happy!

In both films, the Thuggee seek to overthrow the British (something Amrish Puri was more successful at in the film Gandhi) and fail due to the pluck of the heroes. In both, the Thuggee have been nothing but rumor for 50 or 100 years. In neither film do we stop to question whether or not the Thuggee might deserve our sympathy, as they’re just bloodthirsty monsters.

Watch Temple of Doom through to its heart-warming conclusion and then ask yourself: is this an Indiana Jones film or Gunga Din just another step removed from Kipling? Are the cultural politics any improved?

On second thought: better not. Asking questions about these films is kind of like cutting through the rope holding up the bridge you’re crossing.

Just keep moving and let the crocodiles fend for themselves. Never mind that, though, as…