We all have them. Kept in a box in the back of the closet. Almost, but not quite, forgotten, never mentioned in public. Growing larger, year by year, hairier, toothier. Waiting to burst free and to reveal our secret shame for all to see.

I am of course speaking of: Movies You Should Have Seen But Never Have, About Which, When Brought Up In Conversation, You Say Nothing Definitive, Merely Nod Your Head As If In Agreement With The Prevailing Opinion Lest It Be Suspected Or, God Forbid, Discovered, That You Have Never Actually Seen Them, Thereby Bringing Shame Upon You, Your Family, And Any Future Descendents You May Spawn.

It’s a terrible burden to bear, carrying around these secretly unseen movies. But carry them we do. Admit it! You’ve got at least one. Probably more like 147. The best way to rid oneself of the burden is, naturally, to see those unseen movies. That way no one ever need know you once walked among us having not seen them. The other route is riskier, but perhaps more of a psychic unburdening: admit you haven’t seen what you haven’t seen. This is a difficult road to walk for those beloved of film, but nobody said life wasn’t one big shoe store with shoes in every size but yours. I’m almost certain of it. But it is. Life, I mean. A shoe store. Shit. Where was I? 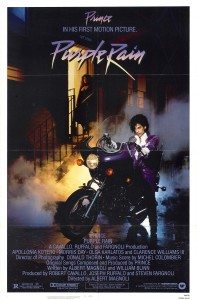 There. I said it. Until a couple nights ago, I’d never seen Prince’s cinematic masterpiece of 1984. I say “masterpiece” in relation to Prince’s other movies, Under The Cherry Moon, Sign o’ The Times, and Graffiti Bridge, at least a few minutes of each I have, much to my regret, seen on cable over the years. In relation to the entire wide world of movies, however, “masterpiece” might be too strong a word for Purple Rain.

I was lucky enough to see a shiny print of Purple Rain at the Castro Theatre (per the Evil Genius’s recommendation) with a self-selecting audience of people who, unlike me, had seen this movie, collectively, twelve thousand times. Or so. They loved every second. And for the most part—so did I.

The story is as old as time, or at least as old as the oldest music video: musician wants to make it big and get the girl, but is haunted by the fear he’ll turn into his father—a wife-beating bastard who squandered his musical genius. 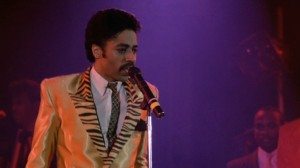 Prince, known herein as “The Kid,” leads his band, The Revolution, at the First Avenue nightclub in Minneapolis. But he’s not the main act. That honor goes to Morris Day and The Time. Morris plays himself as a zoot-suit wearing, kind of goofy businessman. He wants The Kid out, and a new all-girl act of his own devising in. 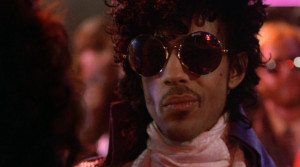 Aw yeah, girl, I am so totally standing right behind you

Enter Apollonia, a new arrival in town. She watches The Kid perform “Let’s Go Crazy,” after which he pops up in front of her wearing reflective sunglasses with lenses of improbably vast diameter. He looks her up and down, then walks away. Only then he appears right behind her like some kind of freaky purple ghost of funk while she watches Morris perform. She senses The Kid’s presence, turns around—but he’s gone! Shazam! Off to ride the night streets on his purple motorcycle. 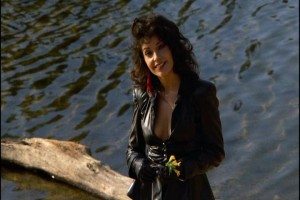 Apollonia and what is not Lake Minnetonka

Who is this Kid? Is he made of magic? Is he a ventriloquist? Actually, yes, in a later scene he has this little monkey puppet and shows off his masterful ventriloquism skills. And later still? He’s a hypnotist. There’s nothing this Kid can’t do.

Except heal his screwed up family. His home life consists only of trying to stop his dad from beating his mom, which attempts result in dad beating on him. The man has some issues.

But that’s not the important part of this movie. The story, I mean. The important part is Prince on stage performing his songs, which scenes are, if I may say so, fucking amazing. So the Kid sees Apollonia with Morris at the club, and goes on stage and performs “The Beautiful Ones,” which has him crying “Do you want him? Or do you want me? Because I want you!” with so much passion I wanted to go home with him. Everyone in the movie theater did. Yes, Prince! We want YOU! Sweet Jesus, we want no one but you! EVER! TAKE ME HOME! NOW! It’s that kind of a performance. 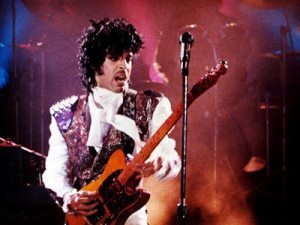 And later, when The Kid feels betrayed by Apollonia, who’s agreed to lead the band Morris is putting together, he sings “Darling Nikki” to put her in her place, a performance so fiery audience members in the theater spontaneously combusted. Fire extinguishers were required.

On stage, Prince is absolutely the most gripping performer you’ve ever seen. Which makes the rest of the movie kind of strange. Because Prince is not, by any measure yet invented by humans, a good actor. He’s not an actor at all. He’s kind of adorable, yes, but that’s not really the same thing. Apollonia is right there with him in terms of acting chops. Watching them act is something like watching a pair of manatees roller skating. Yes, there’s something sweetly innocent and charming about it, but at the same time, should roller skating involve that much flopping around on the floor? No. It shouldn’t. You want to gently toss them back in the ocean, where they belong. The manatees, I mean. Prince you want to toss back on stage, where he belongs. As for Apollonia, mostly you’re just glad she takes off her clothes in that one scene. 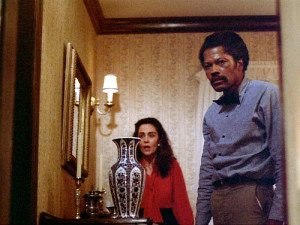 Speaking of acting, it doesn’t help that Clarence Williams III plays The Kid’s dad. This guy does more quality acting with one word than everyone else in the movie combined. It’s like he’s in a different movie all together, some sort of deeply powerful Shakespearean drama. Then again, it’s because of his performance that you feel for him and for The Kid when he (dad) tries to kill himself. When The Kid then goes on stage and dedicates “Purple Rain” to his father, it’s all the more emotionally intense. 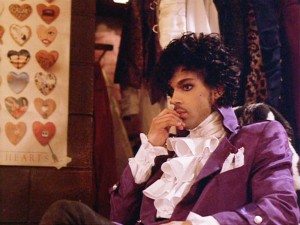 A pensive purple one

So I guess what’s so impressive about Purple Rain is that despite having a bunch of non-actors acting in a story so thin you can see through it, it doesn’t matter. The badness is of the endlessly amusing kind, and it’s all cut together so quickly you’re never for a moment bored. Credit director/writer Albert Magnoli (you know, of Tango & Cash fame), for knowing how to stay out of the way and give Prince a platform on which to do his thing.

The music is the thing. The performances are so great that even if the other stuff was boring you’d forgive it. No wonder this movie, which Warner Brothers didn’t know what to do with and almost didn’t release, was a massive hit. The kids, I tell ya, they loved it. But not me. I didn’t even bother to see it in ’84. Nor did I ever see it. Until now!

I have seen Purple Rain. As for the other shame-inducing holes in my movie-loving life? Maybe we’ll get to those next week. 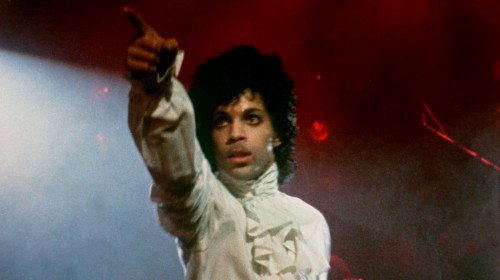 8 responses on “Purple Rain, And The Shame of Movies Never Seen”