Hey there sweet thing. Let me light some candles. Put a little Marvin Gaye on the hi-fi. Fill up our pockets with cereal. Let me do whatever I can to get you in the mood.

Maybe you’d like to come over to my place? See my collection of etchings, or, I know: Let’s watch a couple of films! That’ll get us in the mood. Or at least in a mood. We can be moody together! Rawr!!!

I’ve got just the films picked out. It doesn’t matter what kind of story they tell; these films are all about atmosphere. They’re about mood and state of mind. They transport you from the somewhat dingy couch upon which we’ll sit to a world of whimsy. Or to a world of phantom witches, magical gloves, maggoty rain, and furry royalty. Or perhaps that is like your couch?

Either way; don’t worry. I’ve got plenty of cereal in my pockets. We’ll ride out this emotional storm together, baby. And then we’ll make sweet sweet love. Or popcorn.

Ok, Jeez. Popcorn it is.

Children believe what we tell them. They have complete faith in us. They believe that a rose plucked from a garden can plunge a family into conflict. They believe that the hands of a human beast will smoke when he slays a victim, and that this will cause him shame when a young maiden takes up residence in his home. They believe a thousand other simple things.

I ask of you a little of this childlike sympathy and, to bring us luck, let me speak four truly magic words, childhood’s “Open Sesame”:

Once upon a time… 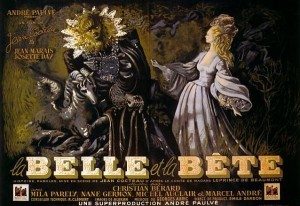 With these words, Jean Cocteau begins his fantastical interpretation of the fairytale, Beauty and the Beast. Maybe you’ve seen the Disney version of the same story? I haven’t, but I’ll assume they’re identical: both black & white, surrealist journeys into the lining between the brutally mundane and the ethereally ecstatic.

Or does one have a dancing teapot? Hmm. 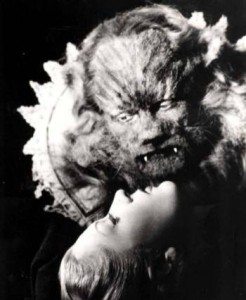 In case you’re unfamiliar, here’s how Cocteau tells the familiar tale. Belle (Josette Day) is the one decent daughter of an unfortunate trader, deep in debt. She demurs when her wastrel brother’s flippant friend, Avenant (Jean Marais), proposes to her, preferring instead to care for her father.

Off attempting to regain his fortune, Dad stumbles upon a magical castle. Here he picks a rose for Belle—it is all she’s asked for—and the Beast (also Jean Marais) appears, furious at the theft. Instead of demanding the father’s death as punishment, the Beast agrees to accept Belle as his prisoner.

And so Belle becomes the charge of the Beast, who only asks for her love. Every day in his mysterious, magical castle, the leonine master asks the demure beauty for her hand. 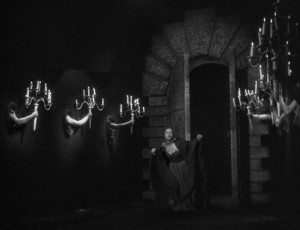 The story, to be frank and obvious, is a fairytale. The characters are archetypes and the drama exaggerated in the way that fairytales are supposed to be. But the manner in which the story appears before you: that is the treasure. Jean Cocteau paints with light in a way that’s transportive. You feel bound into the eerie keep of the Beast. His sorrow pounds you like waves. When Belle encounters the unworldly, you are as equally amazed as she. That is the power of mood. 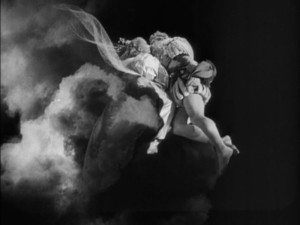 Ghostly hands will guide you. The floor will beg to be your mirror. You will spin dizzy as want and fear pas de deux in delicate black and white and bottomless grey.

And then we will make sweet, sweet love? No? What if I rent us the Criterion edition of La Belle et la Bête? Still no?

Fine. I  know how to get you in the mood. 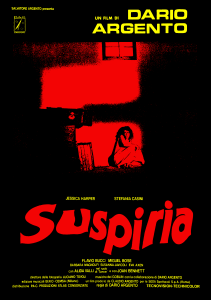 Can I just say, right of the bat, that Goblin—that’s the name of the band (as opposed to the actual goblin who we’ll get to later)—is not fucking around with the soundtrack to Dario Argento’s Suspiria. In fact: no one is fucking around in Suspiria.

The whole thing is like a giant cream pie of freakadelia mashed into your tender face parts. From beginning to end, it is gloriously so far over the top that you may pass out from lack of oxygen.

Suspiria—which is Latin for ‘sighs’—is one of the best known, best-loved examples of the Italian ‘giallo’ (meaning yellow*) genre of fantastical films. Like La Belle et la Bête, it tells a tale as old as time:

Some poorly identified ballet student comes to some strange ballet school that is really a front for the diabolical black arts. 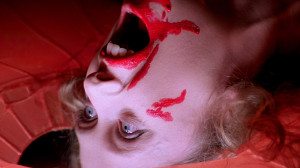 I could spend some time attempting to explain who these characters are and what is appearing to happen, but that would be like trying to read a bowl of alphabet soup. The meaning in Suspiria is not in plot; it is in its lurid, ghastly sensory overload. Things happen—nightmarish and crazy—and their happening is full explanation for why they happen. While I’m sure some would find the film frightening, I find it nothing so much as giddy and exuberant.

Suspiria takes mood and makes it queen. Argento uses special technical processes to exaggerate colors and warp shapes in his film, and that is abundantly clear in the final product. Did I mention Goblin (or ‘The Goblins’ as they’re credited)?  Let us take a moment to listen to just a wee sample of their score.

That got you in the mood, didn’t it? If not, perhaps you weren’t listening to it loud enough? Just a friendly suggestion.

Allow Argento to fill your hair with squirmy maggots, dive into the ever-useful razor wire room, push the blue iris, and fall through the stained glass bathroom floor. Why? Because that’s how the mood strikes you. Or because witches command it.

* The name comes from the yellow covers of the old paperbacks that told these tales.