When Lamech had lived 182 years, he begot a son. And he named him Noah, saying, “This one will provide us relief from our work and from the toil of our hands, out of the very soil which the Lord placed under a curse.”
Genesis 5:28-9 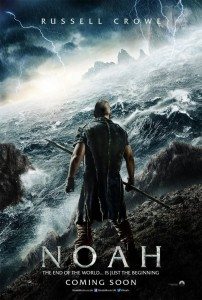 Turns out either old Lamech wasn’t too prescient, or by ‘relief,’ he was referring to death by a world-cleansing flood. For soon enough, out of the sky and even from beneath the soil, will come the insatiable waters.

This week Darren Aronofsky feels compelled to splash a strange retelling of the biblical story of Noah across screens. The oddness of his Noah may flow from its source material, but the oddness is not in any way stilled by Aronofsky’s hand. He is deliberately making splashes.

Reading the few chapters of Genesis that detail the story of Noah will take you about three minutes. Go ahead. The tale is much as you recall, only stranger. Stranger still is how and where Aronofsky deviates from the text. Why he has done this has something to do with the fallibility of both humanity and its hypothetical creator. But we aren’t here to discuss theology; we’re here to discuss films.

And the film that results from Aronofsky’s biblical tinkering is all over the place. It willfully makes little sense. Its dialogue is as boxy and wooden as an ark. The Clint Mansell score leaves little to the imagination. Computer graphics, while occasionally demonstrating Aronofsky’s clever vision, generally look as unreal as water covering the world’s highest peaks.

I wanted to like the movie, but simply lacked the mercy required. 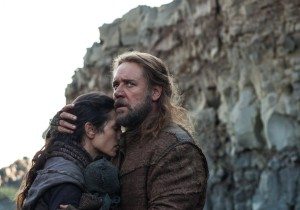 I’ve got a bad feeling about this.

Noah begins like a goofy graphic novel (one of the film exists), darts into Transformers territory so Nick Nolte can gravel around as some sort of holy autobot, dribbles into pseudo-religious reenactment with Sir Anthony Hopkins as Methuselah the magician, and then climaxes early with a Roland Emmerichian version of the battle of Helm’s Deep. The film’s dark third act is spun not from Torah, but from the mind of Aronofsky. Here he focuses on the film’s theme: should mankind be permitted to live?

To get there, he pulls a fast one, altering the story written by the almighty — who, by the way, is denied story credit.

But I will establish My covenant with you, and you shall enter the ark, with your sons, your wife, and your sons’s wives. 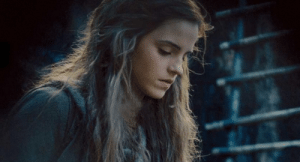 It is presumed by the film that Noah’s own wife (Jennifer Connelly) is post-menopausal, but why this would be, when Noah himself lived to 950, and she has an infant on her hip, no one indicates. So along with a pair or more of every animal, Noah gathers his barren family — including adopted daughter Ila (Emma Watson), wife of Shem — in his big floating terrarium so that the Earth might be cleansed of wickedness by the lord. Specifically, the wicked include Ray Winstone as Tubal-cain, king of men and the bloke what slew Noah’s pappy. Another of Aronofsky’s inventions, but literary adaptations should take liberties or what’s the point?

In this case, the film ended with me asking, but not answering: ‘what’s the point?’ One might think there is a straightforward message to the story of the great flood, but not so in this turbulent telling. 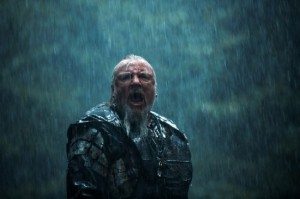 I am the wrath of god.

Noah did not move me to any emotional or intellectual response. Aronofsky has taken a familiar tale — in which the creator admits his mistakes and seeks to start anew — and to it adds another, human, level of fallibility. He adds character to Noah where little existed. He explores what a man tasked with correcting god’s massive blunder might do; how he might feel. Big questions here arise.

Seeing the story of the flood made flesh, one wonders: what kind of joker is this creator? God is either all-powerful, in which case why bother with a flood and an ark; or god is merciful, in which case, why put the only man worth saving through such an ordeal?

Theology. Not my calling. As screenwriter, though, I feel safe in saying that god could have used another edit on this one. They say ‘write what you know,’ but if one is omniscient, that doesn’t help.

In Genesis and in Noah, god has made a terrible mistake — but god is not so merciless as to wipe life away completely. Noah and his family, and also the beasts — clean and unclean — are spared so we might all try again. Noah, in Noah, is faced with his own parallel dilemma. The film is not about the flood, which is just CGI nonsense, but about what is worthy of survival, and who ought to make those choices.

Naturally, there are modern, timeless parallels here. You might see the hand of god in them if you were so inclined. Or you might, with some justification, read this text like a godless pinko environmentalist. 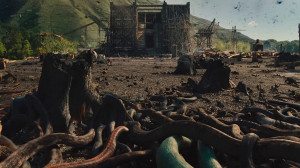 Wherever you go, there you are.

In this lack of consistency, I found Aronofsky’s film fallible. His perversions of the story of Noah did not make it easier for the religious or the irreligious to relate. It is a difficult film in which to feel man’s struggle as personal. Aronofsky’s thread of story is chaotic, swapping logic for parable as the mood suits. It is a corrupted story about uncleansable corruption. In the start, Lamech blesses young Noah, gifting him his birthright with his arm wrapped in the skin of a snake — the snake. This motif returns. Even after the flood, the inquisitiveness that ejected humanity from Eden survives.

And so, what was the point of the flood, and of Noah?

Is it all just a suggestion that we should hold no fear of starting anew? That we not deplete ourselves of mercy? That we be willing to fail? After all, we are created in god’s image and god has failed and shown mercy. Simultaneously, even.

I am unsure who will see Noah and connect with it. I know that I did not. It is not so much a failure as a message with no clear audience. I had hoped that sleeping on it I might awake with some clarity as to what Aronofsky wanted to communicate, but I did not.