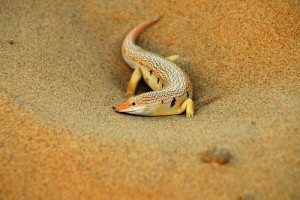 The antagonist in Noah—no, not god, and no, not Noah himself—the other antagonist, Tubal-cain (Ray Winstone), hidden away on the ark, at one point eats a lizardish creature, one we don’t get a good look at. I’m still wondering about that lizard-thing. Did writer/director Darren Aronofsky have in mind what strange and now non-existent creature it was? I wish we’d gotten to see it. Probably the best lizard-thing ever, and now we’ll never know. Maybe its intended mate cross-bred with another lizard-thing, and that’s where sand skinks came from? Did Tubal-cain inadvertently invent the sand skink?

One thing I’ll say about Noah is that, to its credit, I’m still thinking about it, and not only because I’m at this moment writing these words and imagining brand new lizard species. I’ve been reading up on what let’s call the “religious backlash” to the movie, which is, as one must expect, idiotic. There may well be coherent, thoughtful reasons why the faithful should hate this movie, but no one has yet to make them.

One argument is that the Noah of the movie is not the Noah of the Bible. This is an odd thing to say. The Noah of the Bible, who appears in a few brief chapters toward the beginning of Genesis, “has found grace in the eyes of the Lord.” That’s it for character description. Noah says nothing. He does nothing but build the ark, save the animals and his own family, plant the first vineyard once the waters recede, get drunk, and take his clothes off. He lives to be 960 years old. Normal back then. By the way. Not an issue addressed in the movie, but no one’s complaining about that. I wonder why?

Biblical “literalists” don’t exist. A literalist is merely someone who claims they’re interpreting whichever part of the Bible strikes their fancy the way it was written. Which they aren’t. The Bible is notoriously vague and free of detail. You see in it what you want to see. And then you do your best to force everyone else to see it the same way. 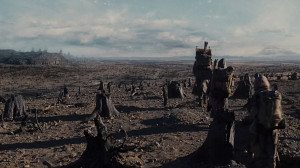 So Glenn Beck and other “religious” yahoos of the political class complain about the movie’s “anti-human” message. The movie being the story of Noah. In which god kills everyone. Because everything humans think and do is evil. I’d say there’s at least a bit of the anti-human coming from the Bible.

But let’s not dwell on the words and thoughts of fools.

Aronofsky, who’s been mulling Noah’s story ever since he wrote an award-winning poem about it at age 13, had a lot of wiggle room in creating the character of Noah. Not to mention his wife, unnamed in the Bible, and his sons, named, and their wives, unnamed, none of whom do anything. No one but Noah does anything. And all he does is what god tells him to do, without question or thought. It’s an awfully short story. 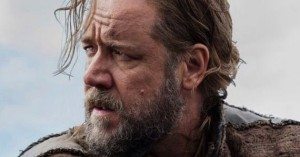 The questions Aronofsky had to ask as a writer were: what must such a man as Noah have been like? What would knowing the world was to be wiped clean do to him? What lengths would he go to please god? What about the humans to be left behind? How would they like god’s new plan? Which included their not being invited aboard the ark? What about Noah’s family? The Bible says Noah’s son Ham saw him naked and drunk, and because of it Noah cast him out. Must have been one messed up family. What must that have been like? To sum up: where’s the drama?

Taking a mythical religious story and looking for the real, the emotional, the human in it is bound to get you in trouble, and not just with the adherents of the given religion. It also puts you in a tricky spot, story-wise. A myth is a myth for a reason. A myth aims to bring out a lesson or a message or a moral or even a profound bit of philosophy. While a myth might focus on a person’s One Big Decision, it’s not going to focus on that person’s family squabbles, inner demons, problems with society at large, etc.

In Noah, Aronofsky wants to have it both ways. He wants his myth—and I haven’t even mentioned the giant stone angels marching around the wastelands—and he wants his human, emotional, dramatic realism. These two goals clash uncomfortably in Noah. 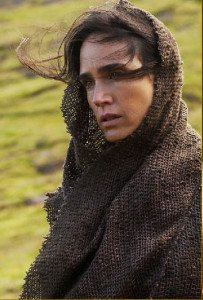 Jennifer Connelly as the wife, not a key player per the Bible

A microcosm of these clashing goals comes late in the film. Noah tells his family the story of creation. It begins with the creator (the word “god” isn’t used in the film, another bone picked over by critics apparently unaware that “creator,” used over and over again, means the same thing) creating the universe from nothing. And this is visualized as galaxies spinning out from a point—much like a big bang, you might say—the solar system being formed—that’s a solar system; you might ask Galileo how the church feels about that idea—the bubbling hot earth solidifying, an asteroid crashing into it and forming the moon (I loved that chapter of the Bible), life beginning on earth, changing and growing in a very evolution-like manner up through the primates, two glowing humans appearing from out of nowhere in Eden, a snake tempting them, an apple eaten, Cain raising high his arm (in a close-up shot mimicking the ape with bone-weapon in 2001), and that’s where we came in, more or less.

So Aronofsky begins by giving us god birthing the universe, followed by everything in the universe growing and evolving based on modern astronomical and biological knowledge not found in any religious text, and ends with god creating Adam and Eve ex nihilo.

Now who, I ask you, is going to accept that telling? Not the religious whose creation myth Noah’s story belongs to. And certainly not the non-religious. This sums up the whole enterprise. Aronofsky has devised a movie whose exact target audience doesn’t exist. It’s a Christian myth lavishly adhered to, except when it isn’t, which, given the myth’s brevity and absence of detail, is necessarily often.

The antediluvian world imagined by Aronofsky is impressively his own thing. His special effects are surreal and unique, more akin to his movie The Fountain than anything typically produced in Hollywood. He imagines fallen angels as stone giants embittered at having once helped the humans who eventually turned on them. Shunned by man and god, they live in the wastelands, killing all who approach. The giants don’t move with the smoothness of standard CGI. They are jerky and rocky, almost like stop-motion. I liked that about them. 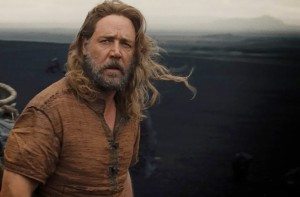 The landscape everywhere is devoid of life. It’s all black rock desert. Humankind mines ore and lives in dirty, miserable cities. They kill animals and eat their meat. They are all descendents of Cain. Noah (Russell Crowe) and his sons, meanwhile, are the last descendents of Seth. They’re vegetarians. This is another reason the pseudo-religious/political right is up in arms about the movie—it has an environmental message! And I guess it does. Something about how destroying the earth is bad? Whatever. Too complex a mess to get bogged down in. Pass me another oil well, would you?

Noah sees a vision of the world destroyed by water. He takes his family to the mountain in which his grandfather, Methuselah (Anthony Hopkins) lives, tells him of his vision, and Methuselah pretty much says, “Do what you gotta do, Noah,” then gives him a seed smuggled out of Eden. Planted in the dead earth, a mighty forest grows. Trees for the ark.

And so on. Ark is built, descendents of Cain, led by Tubal-cain, ain’t happy about it, rains fall, ark is attacked, stone angels kill all who approach it. Then the flood hits, and everybody dies. 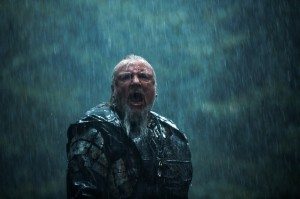 Crowe plays Noah as a very serious, very haunted man. He does not crack jokes. One scene shortly after the flood hits has Noah’s family crouched within the ark, listening to the cries of the dying. It’s genuinely creepy. More so when we cut to an exterior view of the ark floating next to a mountaintop just poking above the rising waters, covered in the last humans, screaming as the waves fling them into the sea.

In terms of family squabbles, the prime focus is on Ham—seeing as he’s the only one who does anything in the biblical telling—who doesn’t have a wife to take on to the ark. He mucks about in the vile encampment of the baddies and finds a cute girl nestled in a mass grave. But does she get on the ark? Thanks to Noah, no. Looks like a classic case of teenage rebellion brewing. 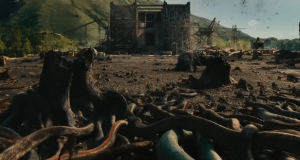 Snakes…why’d it have to be snakes?

The scenes where the multitudinous animals make their way aboard the ark work as well as they could, I suppose. Let’s be honest: the story of Noah is terribly silly, and no amount of dark, grim storytelling can totally obliterate that fact. Which is a weird thing to say, I suppose, that a myth about god murdering all of humanity is silly, but there we are. Once on board, the animals are put into a deep sleep by a steaming potion Noah brews. Clever. Now the humans won’t have to wade through animal shit for forty days. You’d think some generous Christians would congratulate Aronofsky for solving that riddle.

Aronofsky is a good enough writer and director that at least for the first two thirds of the movie (or so) you aren’t slapping your forehead repeatedly (not that your forehead isn’t getting a little action). Speaking as one who does not take religious myths as fact, Noah sort of, but not quite, works, except when it doesn’t, prior to the flood arriving. A ringing endorsement, I know. 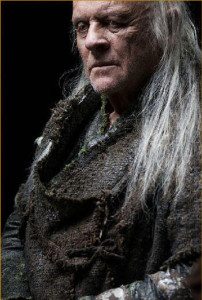 Anthony Hopkins plays old as Methuselah. And by ‘old’ I mean 900 years old

Once the ark is underway, the movie pretty much falls apart. Noah turns from being haunted and driven to crazy and evil. There’s a pregnancy, a stow-away (lizard killer!), the aforementioned teenage rebellion come to fruition, and what I found to be a laughable scene between Noah and his wife, Naameh (Jennifer Connelly). It’s Connelly’s one big emotional scene, which is too bad, because it killed any goodwill I’d been feeling up to that point. Once the movie moves this far from the myth, it becomes trite and unbelieveable. And predictable.

Aronofsky gives Noah a decision to make at the end. He (Aronofsky) has to, if he wants Noah to be anything other than god’s automaton. The biblical version gives zero agency to Noah. He does what god tells him to do, no questions asked. At least in Aronofsky’s version, Noah is given a reason to be conflicted. Ultimately it’s he who must decide if humanity is to be given a second chance. But by this time your forehead stings, you’ve been slapping it so hard.

The end of the movie, with our heroes safe on dry land, plays out as a heavy-handed religious feel-good wrap-up, again forcing one to ask, for whom was this movie made? For those who want a simple religious lesson requiring no thought? Or those who want to face the difficult questions inherent in yet glossed over by religious texts? The answer is a resounding neither. 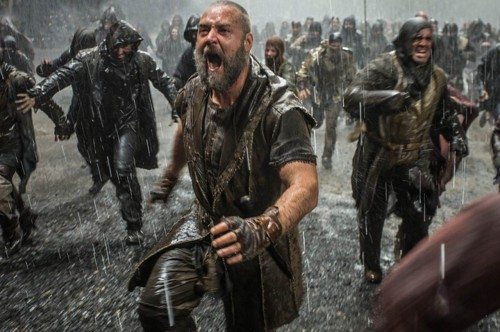 4 responses on “Noah, Or: Aronofsky Vs. The Bible”