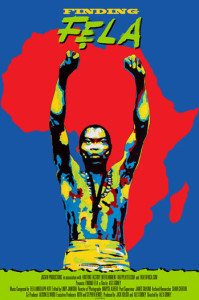 The good thing about Finding Fela, the new documentary by ubiquitous doc-maker Alex Gibney on Nigerian Afrobeat inventor and political firebrand, Fela Ransome-Kuti, is the footage of Fela playing his incredible music. The worst thing about the movie is its framing mechanism: the creation of the recent Broadway musical about Fela’s life, Fela!

With so much extant footage of the actual Fela Kuti, why on earth does Gibney waste my time with footage of the musical? Of some Broadway song and dance man pretending to be Fela? With current Afrobeat revivalists Antibalas as his band? I happen to like Antibalas quite a bit, but you know what band kicks their asses from here to Lagos? Afrika 70. Fela’s band.

Perhaps worse still is listening to the makers of Fela! blather on about who Fela is and what his music means and how they’re going to turn his complex life into a bouncy Broadway toe-tapper. When Bill T. Jones, responsible for the book and the choreography of the show, explains that his real breathrough was discovering how much he could learn about Fela through—wait for it—his music, I literally slapped my forehead. 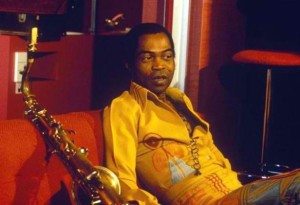 The man and his horn

You think so, Mr. Jones? That by paying attention to the art of a genius artist we might learn something about that artist? My god, what next? Will we land a man on the moon?! Humankind can only dream!

Finding Fela is very professionally put together. Which is another problem. It feels safe. It never really says anything about Fela. This is too bad. Why? Because Fela Kuti is a fascinating, too little known man, whose life was anything but safe, be it musically, politically, or personally. Director Alex Gibney has been releasing two to three docs a year since at least 2010. One must wonder if this limits the possibility of his having anything insightful to say about his his subjects.

There isn’t really any perspective on Fela in this doc. Its subject is “some of the stuff Fela Kuti did.” If one knows literally nothing about the man, it will certainly be interesting. You’ll learn something. You’ll be turned on to some amazing music. But if you already know he was a major voice in Nigeria’s tumultuous political scene in the ‘70s, and that his music is some of the best ever made, the doc isn’t going to widen your perspective. It will provide you with some details to fill in the blanks, sort of like a visual, musical Wikipedia entry.

More of this, please

What’s missing is any kind of focus, and a passion for whatever that focus might be. A few band members are interviewed, and a few of Fela’s wives (he had something like 27 of them. At the same time). Why not talk to Nigerians today about Fela’s lasting cultural impact? About what it was like when he was at his peak in the ‘70s? Why not talk to political leaders in Nigeria, both current and past? What do they/did they really feel about him? What about the influence of his music? Finding Fela treats Fela’s music as it does the man, as if nobody’s ever heard of it or him. Maybe this is true of the average American. But not of musicians. Fela and his two bands, Afrika 70 and Egypt 80, loom large. Why not explore how this man from Nigeria influenced music all over the world? These elements are all touched on, glancingly, but nothing is explored.

As for Fela’s personal life and beliefs, they’re essentially glossed over as being “too difficult” to get into. Too difficult for what? Oh, right. Too difficult for a Broadway musical. We get footage of Fela talking about women once. He has a rather benighted view of their place in the world. Another avenue worth exploring, one would think. 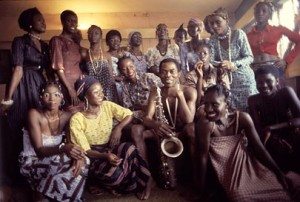 Fela and some of his wives

Surely there exists more interview and performance footage of Fela? It feels as though very little is used in Finding Fela as we’re whipped through his life, or as much of it as the Broadway show requires. Often it’s the makers of the musical walking us through events, and the star of their show reciting Fela’s words.

I admit I may have thought the movie was going to be something it wasn’t. Its name, Finding Fela, refers not to a search by the filmmakers, but to one by the people making the musical, and how they turned this man’s legacy into a peppy show. Maybe the producers of the musical financed the movie? There are two movies at war in here: one, a doc about Fela Kuti, and the other, a doc about the making of a musical. I could have done without the latter. 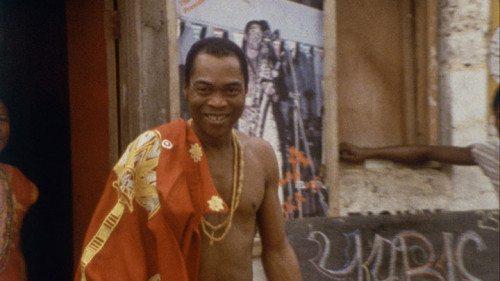 While you’re here, dig this: