People say to me, hey Evil Genius, what the dang heck am I supposed to watch if I’m too dang lazy to flex my ass cheeks to the degree necessary to escape the gravity well of my couch?

Well, I say very quietly, you could watch something that’s streaming right into your goddamned eyes. Some of the best films ever made are streaming on Netflix, Hulu, and Amazon Prime right now.

In Flux Capacity, one of your two brilliant editors here at Stand By For Mind Control will point you towards a film you can watch without any more prior planning than joining Netflix in the first place. No more will you randomly pick something that has a groovy looking poster and discover it sucks the buttons off a pair of worn leather pants. And by “worn” I mean “someone’s wearing them right now,” as well as “in need of hygienic attention.”

We will endeavor to select films that aren’t commonly hailed as genius, as seriously, if you need someone to tell you to watch Apocalypse Now or The Graduate you should just be looking at our I Like to Watch list. It goes without saying that we recommend watching all of those films, ideally in one two-week long marathon.

Kenny resembles Bridesmaids, except the poop jokes in this film are actually funny, relevant, and, (once you’ve washed your hands) genuinely touching. Kenny, you see, is a mockumentary about a porta-potty deliveryman. It’s his job to set up the things, clean ’em out, and deal with whatever problems arise.

Where Bridesmaids is completely ridiculous and fairly gross, Kenny is all too believable and surprisingly less gross. Kenny is fiction, but that didn’t stop many people from believing that the lead character (Kenny Smyth) was a real guy. He’s that convincing. He’s also just the kind of fellow you can’t help but like—not brilliant, not rich, not suave, just a good egg doing a thankless task.

While you might expect this film just to be juvenile crap jokes, it’s more than that. That’s because the filmmakers aren’t making fun of Kenny. He isn’t the joke at all. In fact, I’d be surprised if you didn’t end up liking this character a hell of a lot more than you like anyone in Bridesmaids or any other summer splash hit. 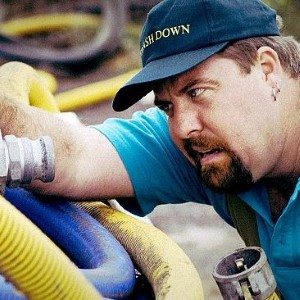 This is the kind of movie that’s perfect for a night in. There’s nothing too taxing about it, no complex plot, no heavy political message. You just get to spy on Kenny’s world, laugh with him, and feel a bit better about whatever it is that you do for a living. Chances are it’s not as excrementally involved as Kenny’s gig.

One caveat: Lead actor Shane Jacobson plays Kenny with a speech impediment on top of his Australian accent. There are no subtitles on Netflix, so if you have a hard time with dialects, be forewarned.