Movie soundtracks come in many forms. I’m here to talk about one type in particular: original scores, that is, music composed specifically for a given movie, as opposed to scores consisting of classical music or old rockity roll songs or songs by that band the executive producer’s son is in. These are scores I’m recommending not as companion pieces to the movies they were made for, but as great albums in their own right, as albums that work regardless of whether you’ve seen the movie, or, if you have, whether you liked it or not.

So for example, John Williams wrote some great movie music. I put on the Raiders of The Lost Ark soundtrack now and then. But to me, his music works in the context of the movie, and of my memories of it. The Raiders fanfare is, frankly, kinda dopey, but because I love the movie, I like it. Same with his Star Wars stuff. It’s fun to hear The Imperial March because it’s fun to imagine Darth Vader marching around choking people to death. 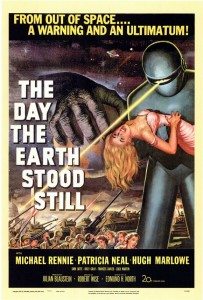 Writing this I’m listening to the music from The Day The Earth Stood Still by the genius Bernard Herrmann. It’s great. But that’s because I love The Day The Earth Stood Still, and all things theremin-related. The soundtrack is in a sense not a complete artistic statement on its own, if you see what I mean. It sounds like a part of something else. A beautiful part, yes, but one that’s designed to fit together with other parts to make a whole.

It’s like if someone shows you the props from a weird-ass movie you love. They might be amazing little artworks, yet their power comes from having been in a beloved movie. They belong in the movie. They’re fun to observe outside of their natural habitat, but if you’ve never seen Dead Ringers, you’re not going to be especially interested in the gynecological instruments for operating on mutant women. For example.

These scores are different. They stand on their own. And yes, you could argue that the best scores don’t stand on their own, that by definition the greatest movie scores are those that blend with their hosts, that make no sense heard by themselves. You may very well be right. But I’m not talking about those scores. The ones listed below are total musical statements all by themselves. In some cases they come from brilliant movies. In others, they don’t. In every case, it doesn’t matter whether or not you’ve seen the movie. The music lives on its own. 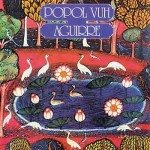 The oddest mix of trippy choral drones and happy, psychedelic guitars and percussion you’re likely to hear. I would expect nothing less of a Werner Herzog film. I love this movie. It should be seen by all humans. Yet somehow I can’t picture it in my mind with music. It must be there, but it totally blends in to the point of invisibility. Making it stranger still that listened to as an album you might not even think it came from a movie. 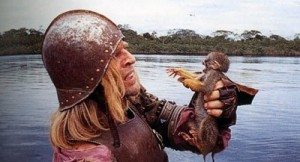 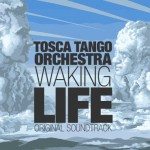 A philosophical movie by Richard Linklater shot on digital video and then rotoscoped to give it a wiggly animated look that may cause vomiting in those prone to motion sickness. It’s a series of conversations suggesting something or other about life being a dream, and there is no time, and etc., so on and so forth. It didn’t do much for me. But the music! It’s got this kind of classical meets tango vibe. Yet it’s also melancholy and contemplative in places. So let’s say it’s classical music you can dance to, but only if you’re very sexy and drinking margaritas, and it’s late at night, the lights are low, there’s just the two of you, and you’re almost out of nickels for the jukebox. It’s damn fine, is what it is. That’s all you need to know. 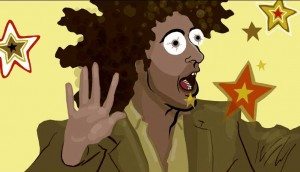 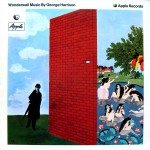 Apparently there’s this movie called Wonderwall. I’ve never seen it. It sounds kind of awful. Then again, maybe it’s a lost masterpiece. No matter. The soundtrack is the first solo album by a Beatle, and it’s completely neato. A mix of rock and psychedelic weirdness and Indian music, which of course Harrison had been getting very into in those days. It’s sad and happy and weird and full of sitar and not really at all like a normal movie soundtrack. So about what you’d expect from late ‘60s, tripped out Harrison. A good album to listen to if you want to feel like you’re on drugs, but without the bother of actually taking any drugs. 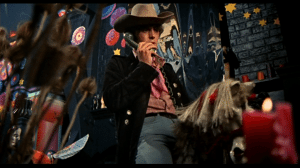 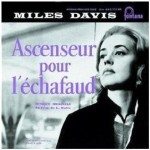 A film noir with an original score by Miles Davis, improvised over the course of one long night. It’s short, only a half hour of music, all of it as sad and lonely as any music ever made. It’s director Louis Malle’s first movie and it’s not great, but it’s full of dramatic, noirish images, and stars Jeanne Moreau, so it can’t be all bad. Miles was at the top of his game in the late ‘50s, a decade that would culminate for him with Kind of Blue. The tracks here range from complete songs to atmospheric sketches and add up to one very sad and beautiful album. 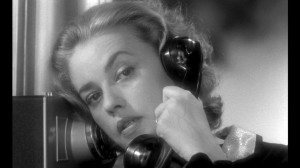 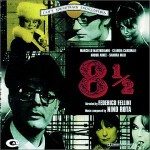 The best crazy-time circus music ever. From Federico Fellini’s greatest movie. The movie is grand, the soundtrack is perfect. Nino Rota makes the most wonderfully happy goofy music in the world. Danny Elfman owes his entire Pee-Wee’s Big Adventure score to Rota. Well maybe that’s unfair. Sort of. Listening to this you will want to build your very own spaceship, wear a cool hat, and have joyful affairs with all the actresses in your movie, because you are a movie, you’re stuck in traffic, you’re floating up into the sky, there are clowns, and give me that whip! 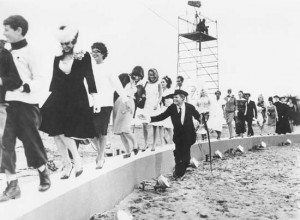 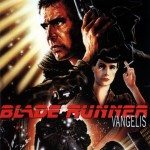 For the originally released version of Blade Runner the studio tossed out this soundtrack in favor of a more traditional orchestral score. What a bunch of assholes. Thank jeebus Ridley Scott was able to put out the real version of this movie in ’92 (and yeah, more and more versions since, with ever more tiny tweaks), one featuring the most inspired music Vangelis ever made (Chariots of Fire be damned). It’s eletronic and weird in a very ‘80s way, but unlike so many early ‘80s synthesizer experiments, it doesn’t sound dated. It’s of its time, is all. It’s the ’80s projected 40 years into the future. 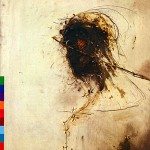 Gabriel had done one prior soundtrack, for Birdy in ’84, that used instrumental tracks from his fourth solo album, when Martin Scorsese asked him to work on Last Temptation. The movie is what one might generally refer to as “monkey poo,” though it had some nice bits here and there. I can’t remember what they were, but hey, it’s Scorsese, I’m sure it looked great. And it taught us all one very important lesson: Harvery Keitel should not be cast in sword and sandals epics. At least he wasn’t naked. Anyhow, the music. It’s one of the best albums Peter Gabriel ever made, and actually this one really is something like an album, in that Gabriel kept working on the music after the movie was released and put it together puposefully as something to stand alone. Good move, that. It features all sorts of Middle Eastern, African and Indian musicians, including Nusrat Fateh Ali Khan, Youssou N’Dour and L. Shankar. 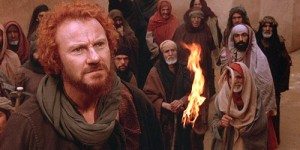 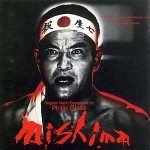 Philip Glass’s second full movie sountrack, following the brilliant Koyaanisqatsi (which I’ll just assume you already own and listen to daily). In this case, we have a very unusual and excellent movie written and directed by Paul Schrader, and a score that only adds to the sense of otherworldliness permeating the semi-fictional/semi-autobiographical, poetic novels of Yukio Mishima. If you’ve ever heard Glass, you’ve got an idea of what you’re in for, a particular kind of minimalism pulsing with emotional life. This soundtrack in particular represents Glass at his best. Most interesting is the unusual instrumentation, including electric, ‘50s style guitar. I adore Glass’s music, I’ve got countless albums of his, and this remains one of my favorites. 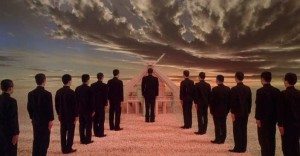 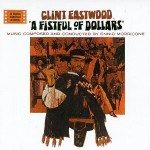 Leone’s westerns wouldn’t be half as good as they are without Morricone’s music. The music defines the movies. And still it works on its own. I could listen to the opening title track on repeat for the next year and not get bored. Morricone is a musical genius whose notions of orchestrations I can’t even begin to wrap my head around. He blends the craziest assortment of instruments and noisemakers and guys chanting “we can fight!” into the best soundtracks ever made. When you’re done listening to this one, put on his music from The Good The Bad And The Ugly. And then ride away into the desert in search of lost gold. 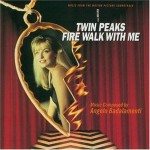 David Lynch’s prequel to the Twin Peaks TV show, much hated by damn near everyone upon its release. Personally I think it’s brilliant. But that’s a discussion for another post. The music is by Angelo Badalamenti and it’s glorious, even better than his work on the TV series. It begins with four haunting, slow burning jazz numbers, the third of which features jazz legend Jimmy Scott’s eerie vocals. Then it gets weirder. A spoken word piece. More dark jazz. Then The Black Dog Runs At Night, the title repeated over and over again, like an aural version of Lynch’s The Angriest Dog In The World comic. The experience of this soundtrack is that of a slightly crooked and spooky dream growing ever more nightmarish. The centerpiece is a percussive, purely evil track called The Pink Room, a repetitive, hypnotic dirge that grabs you by the head and drags you down into darkness. By the end you’re rescued by angels, but barely. This is music that creeps deep inside you and never leaves. 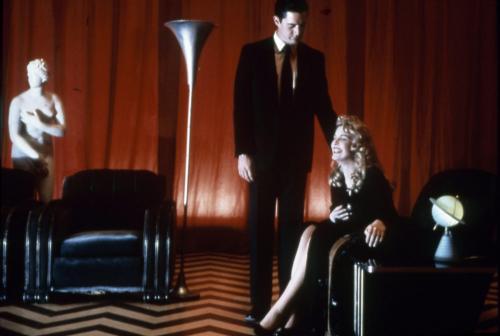 3 responses on “The 10 Best Soundtracks for Obsessive Listening”