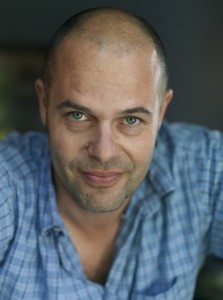 UPDATE: The Details is now available for streaming.

Recently, Stand By For Mind Control had the opportunity to toss some questions at Jacob Aaron Estes, writer-director of the film The Details. Jacob’s first feature, Mean Creek, was snatched up at Sundance in 2004 and went on to win a pair of Independent Spirit Awards. The Details, his second directorial effort, screened at Sundance in 2011 and opens in November.

Jacob’s face is familiar, to me at least. We both attended U.C. Santa Cruz in the 90s and the Performing Arts Center wasn’t huge. We spent some time last week catching up over Skype.

Before we jump in, though, check out the official trailer for The Details:

Zack Kushner: So start us out with the nickel tour, please. How does one go from being a theater student at Santa Cruz to directing Tobey Maguire in a feature film?

Jacob Aaron Estes: Basically, I wrote my way into it. The main thing is that I just kept doing it like a mad person, risking my life, livelihood, and sanity for as long as it took.

Before I made Mean Creek, I had written about ten screenplays. I went to film school at AFI for directing and I also had the opportunity to attend the Eugene O’Neill National Playwrights Conference. There, theater geniuses helped me develop my work, specifically Mean Creek. After that, I won a Nicholl Fellowship in Screenwriting.

Even then, I wasn’t all set. It took yet another screenplay to jump-start my career.

After that, we made Mean Creek on a shoestring and Paramount bought it. I got to The Details after a bunch of false starts.

ZK: The actors in Mean Creek were relatively young. How did directing them compare to directing actors with Spiderman-level experience?

JAE: Ironically, it wasn’t that different!

With the Mean Creek cast, I was concerned that, being young, they would close off if I over-directed them. So I didn’t constantly tell them how to behave. I left them to move in their own states of imagination.

Practically speaking, that’s what I did with The Details cast, too, but for different reasons. In that case, I didn’t need to push—those people are so good at what they do! In a lot of ways, it’s just “don’t screw them up.” 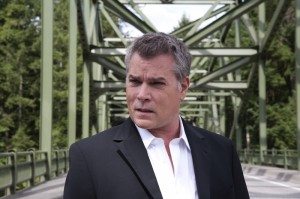 I would not mess with Ray Liotta

Laura Linney’s treatment of her character in the movie, for example, is vastly different from what I pictured when I wrote it; yet she perfectly captures the character’s spirit in her own unique way. And Ray Liotta. I didn’t write the script with Ray in mind. But even if I had written that character for Ray, I didn’t know him at all when I wrote it! So Ray showed up. He had a thousand ideas of his own that he wanted to explore, and I let him.

ZK: I understand you wrote The Details organically, without a plan. Where did the seed of the idea come from?

JAE: This actually takes me back to our playwriting teacher at UCSC, Jim Bierman. He once advised me that I should collect the ideas I had that I liked, but which wouldn’t stand on their own. One day, he said, I might be smart enough to synthesize all my ideas into one story. The Details does that; it combines a number of anecdotes I’d been collecting into one tale.

The other seedling of the idea was I had become fascinated with the idea of writing a story about becoming an adult, because recently, I became an adult! (laughs)

Mean Creek was about being a kid, in a really broad way. And so, this time, I wanted to talk about marriage, responsibility, the things we do as men and women to hurt each other, and how we might redeem ourselves. 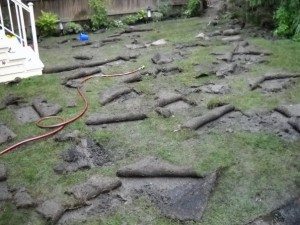 I don’t see why anyone would get upset over a little raccoon damage?

All of these ideas came together around something that was actually occurring in my life when I started writing. I’d recently bought a house in Echo Park and put in a lawn. But raccoons kept flipping the sod over during the night. I got fixated on stopping them. I went to great lengths. It was such a funny thing—I thought it would be a great central obsession for a character in a movie.

ZK: How did it go with The Details at Sundance?

JAE: Mean Creek was bought at Sundance and out in theaters four months later. With The Details, Harvey Weinstein bought it at Sundance and then we spent several months talking about how to make the movie into the best version of itself. Ultimately, I wrote a script for pick-ups and we shot two days. It was a long editing process, too. A bunch of small story items got clarified, but what really changed was the spiritual message of the movie. The cut that’s opening in November—that’s more like my original screenplay. 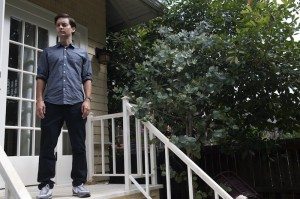 Toby Maguire surveys the fallout in The Details

In the final version, the fact that people are ultimately responsible for their own outcomes is clear. The Sundance cut suggested that our anti-hero was punished by God, or karma, or something of that nature. And that was not my original intent.

I feel blessed to have had the opportunity to give the film the time it needed to show its best side. I’m really grateful that the Weinstein Company and their new partners, Radius, gave us the extra time we needed to make The Details a better film.

ZK: What do you look at when gauging if one of your films is successful or not? Box office numbers? Critical response? Audience reaction?

JAE: I think it’s how a movie travels over time. Does the movie keep living on through the decades? Does it speak to people in a meaningful, lasting way?

That’s all that really matters ultimately. It’s nice if everyone wins the lottery and gets a Porsche, but it isn’t what any of our better selves got into this for.

JAE: I’m not interested in making films just to make my films. I’m willing to lose my career if that’s the choice. What? Are we Mitt Romney? Are we here to trade all of our values for success? Trade anything and do anything for security? 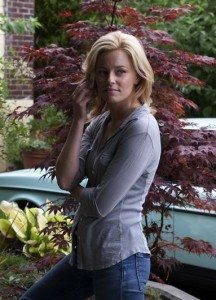 Elizabeth Banks in The Details

If we are, that’s fine. Protecting our families financially is fine. But why make movies at that point? Maybe you enjoy it? Maybe you enjoy making big movies that are fun? And, honestly, I think I would and will at some point want to try making a big movie—but that’s because I’m honestly interested in trying it.

Right now I’m writing a movie that I hope my children will like. And it’s a big movie. But I’m not writing it because I want to write a blockbuster. I’m writing it because it has themes that get me out of bed in the morning and motivate me to get past my anxieties of failure, so I can sit at my computer for eight, nine, ten hours in a row working.

ZK: You’ve got another directing gig lined up, a thriller called I.O.U. What can you tell us about that?

JAE: Yeah, Michael Ross wrote that script. It’s a very topical story about a man who’s losing his home. He’s an insurance salesman in the suburbs with a wife and two children. They have no idea how badly in debt he his. He makes a deal to get himself out from under, but this really terrible guy gets control of his debt and forces him to do horrible things.

ZK: Are there any projects you’ve always wanted to work on that you now might be in a position to make happen?

JAE: Well, there was this one script going around based on Richard Clarkes’ Against All Enemies. That was profound and amazing. I didn’t have a shot at directing it. Robert Redford wanted to do it, but it hasn’t been made yet. Not sure why. That was a meaty, political, topical story about America and our flaws. It was a movie that I really wish had gotten made and a book I wish everyone had read. I’d love to do something like that in the future.

ZK: I’ve been talking to one of our college classmates, Ben Gardella, about the student films you made. He said you have an ability to get an actor to display their crazy face. What’s that about?

Laura Linney dishes out some crazy face in The Details

JAE: (laughs) I just like to push limits! Anyone that knows me knows that I have a twisted, dark sense of humor. I keep telling dirtier and dirtier jokes until everybody is offended.

I like to create an environment where people can explore going over the line, emotionally. When you do that, and you’re being honest, sometimes you get the crazy face. Because the crazy face is real.

ZK: I’ve been threatening to dig up some of your student films. Any you’d like to share?

JAE: Oh god. Yeah. Hold on. (Jacob sends a link) I made this music video for my wife’s band, Super Sauce, when I was a senior at Santa Cruz. The band was my wife Gretchen (Lieberum) and Maya Rudolph plus Jim Maclay, Mike Cruz, Alex Budman, Tim Carter, Dustin Hengle, and Jordan Glasgow.

It’s ridiculous, but kind of fun. Ironically, Gretchen and Maya just played on Late Night with Jimmy Fallon. They have a Prince cover band called Princess.

Here’s the video, and your chance to see what Maya Rudolph looked like in college…

The Details stars Tobey Maguire, Elizabeth Banks, Laura Linney, Ray Liotta, Dennis Haysbert, and Kerry Washington. It opens in limited release on November 2nd and will expand to 30 other markets the following week. You can also catch it on Video on Demand in October. Check out the official Facebook page for more info.

And, just because we like you, here’s a special treat. Unseen since college, Jacob’s magnum opus student film. Thanks Ben!