I am not, in general, a kung fu fighter. That’s not to say that I can’t get into the balletic precision and athletic exuberance that imbues top-notch martial arts movies. They can be excellent fun.

When encouraged to, I will even sweep the leg.

As special effects create new opportunities for action sequences, though, I want physical effects to stay front and center. That’s what kung films ought to be about: people hitting each other.

CGI rigamarole can’t cut it alone. It can only add  flavor. 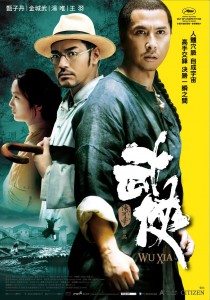 And this brings us to Wu Xia (Dragon), a Chinese/Hong Kong martial arts film that’s just about to open in the States. I actually got to see it a while back at the disappointing 2012 San Francisco International Film Festival. It was one of the few screenings I attended there that didn’t suck eggs.

Interestingly, its style seemed inspired not so much by the One Armed Swordsman—the 1967 martial arts classic its director (Peter Chan) and star (Donnie Yen) state the picture is an homage to—but rather by Guy Ritchie’s version of Sherlock Holmes, which now that I think on it, seems inspired more by the C.S.I. television shows than by Sir Arthur Conan Doyle.

What I’m talking about is the time-lapse/rewind/let’s see that again action sequence style all three productions employ. This effect is something I’m going to disingenuously dub “explosive action”—since actions are literally exploded out as in a schematic, so that each element can be considered in isolation before (or after) the entire sequence is put together.

Watch this clip from Ritchie’s film (start at 1:30 or so) and you’ll see what I mean.

It’s entertaining, sure, but does it fit in this film? I think not. To me, it clashes with the houndstooth of the hero.

Where in Sherlock Holmes we are challenged to believe that the sleuth can play chess with the chaos of an altercation that is yet to occur, in Wu Xia we see how a real martial artist might remain reactive, steering a careening battle to its desired conclusion through physical responses. That’s more believable. It’s also more fun.

In many ways, the explosive action in Wu Xia just blends easier than it does in Guy Ritchie’s film. They’re both fin de siècle detective yarns, just one doesn’t run roughshod over a century of storytelling and the basics of logic. Instead, it adds something to the mix. 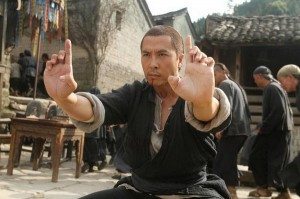 Martial arts films have been outgrowing their trousers every few years. Nothing wrong with that. Here, a moderate dab of CGI doesn’t spoil the fight, it just adds a bit of shine. The result may feel a bit C.S.I. Qing Dynasty, but it works.

The basic story of Wu Xia is that a humble villager (Yen) miraculously defeats a wanted criminal in battle, via what appears to be a miraculous series of accidents. The investigating detective (Takeshi Kaneshiro) grows suspicious and, in a first act reminiscent of Cronenberg’s A History of Violence, outs Yen as a man with a dangerous and best-forgotten past. And then conflict and drama ensue. 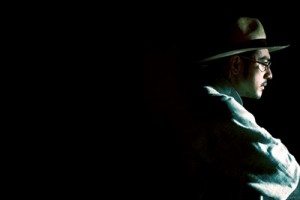 Kaneshiro’s detective is brilliant and lacking empathy, much as Sherlock Holmes ought to be. He interprets the evidence of the world around him—not as it is described, but as reality demands. He might as well be Sherlock Holmes.

Unfortunately, I can’t find a clip of the explosive action in Wu Xia (although you can see a taste in the trailer below). To me that was the most interesting and exciting part of the film. Unlike many martial arts pictures where the blur of arms, legs, fists, and dirty looks turn into a hash of action, here we see a fight exploded out, with each piece dusted off, inspected, and replaced. It’s as if we are able to interpret the language of the battle alongside Kaneshiro’s detective.

It’s satisfying. It’s interesting. And, on the whole, I enjoyed Wu Xia.

The film gets a bit mythic and melodramatic, which is fairly par for the course for the genre, but it does dole out engaging characters and a discernable plot. If you’re in the mood for some filmic fisticuffs, you could do far worse.