Let’s accentuate the positive, shall we? That moment—the one in the trailer for The Hobbit—where all the dwarves start singing their sorrowful song? That’s pretty good. There’s a funny bit with snoring and moths a bit later. There was a third thing I liked, too. I can’t remember what it was now, though. 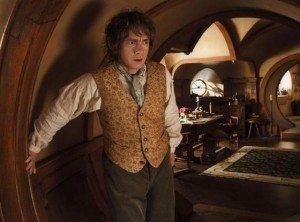 Yeah. I’ve got a bad feeling, as well.

Pretty much everything else about The Hobbit was cataclysmically misjudged.

Watching it tonight, I second-guessed my affection for The Lord of the Rings films. Were they this awful? How could I like something so poorly paced, so lacking in character, so devoid of emotion?

But they weren’t like this, not by a longshot. Remember in The Fellowship of the Ring when Boromir regains himself after being seduced by the ring, and he defends Merry and Pippin with his life? The arrows hammering him as he holds his ground? That was a great scene. Even though Boromir had always been kind of an ass, you loved him then. You saw the best in him rise up against the dark. Admit it. You cried a little for poor Boromir.

There was absolutely nothing like that in The Hobbit.

Now, I saw The Hobbit in the 48 fps 3D non-IMAX version. I’d like to tell you about how crisp and clear the high frame rate looked, but I can’t. It looked ghastly. It looked like one of those videos they make you watch while you’re waiting to get on the Space Coaster. It looked like one of those scenes out of a video game, where the CGI characters talk about stuff you don’t care about instead of killing each other with rocket launchers.

I can imagine 48 fps might look good one day, if they figure out how to light for it. As it is, they clearly havent. And seriously, why bother? Has anyone been complaining that movies don’t look sharp enough? No. No they haven’t. Because movies—film—looks stunningly gorgeous.

These looked less real when they moved.

In 48 fps, I couldn’t stop thinking about how phony everything looked—basically because everything looked horribly phony. It was like being at the Ren Faire with your weird uncle. Sets, props, costumes, digital effects, and actors all universally looked worse than I expected. The passionate attention to detail the designers laid into Lord of the Rings, if it was here, was fully and totally wasted. I didn’t believe anyone was who they said they were or anything was what it was supposed to be.

The entire time, I was watching a bad-looking movie. It was as believable as Sky Captain and the World of Tomorrow.

So then I wondered, would this movie be better if I saw it in 24 fps? If I hadn’t been so distanced by the new technology, would I have been engaged more by the story, by the characters?

I doubt it. It was mess on that score, too.

Remember when you first saw The Fellowship of the Ring, and it started with that weird prelude about Sauron’s defeat and Isildur’s Bane and all that? And then you’re in Hobbiton getting smacked around with the twee stick and thinking, “Oh god. Three hours of this? Kill me now.” 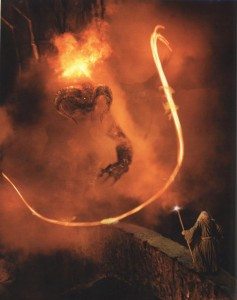 But then—and this is the important bit—it got better. Much better. You got to know Frodo and Sam and worried about them. The threats felt real. The battles, when they came, were hard-fought and narrowly won. You knew how it ended, but that didn’t keep you from feeling engaged. Even the humor frequently struck true. And by the time Gandalf faced off against the Balrog you were part of the fellowship. You cared. Because Peter Jackson made some good movies there.

Sure, they’re a little long, but becoming immersed in that world wasn’t a challenge.

So what happened with The Hobbit? I can only guess.

Firstly—and obviously—there isn’t enough story for nine hours of movie. Four would have been plenty. I was seriously bored and considering leaving before Bilbo even left the Shire. There’s like 20 minutes of dwarves having dinner. That’s it. Just dinner. 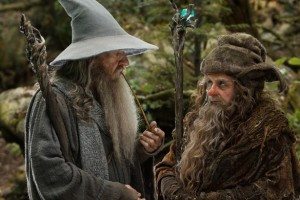 Radagast looks like a muppet with a glandular problem. And head fungus.

Secondly; all of the bits and bobs Jackson dragged into the story so this series of films might tie in better with The Lord of the Rings are terrible. Thematically, tonally, and in terms of simple pacing, they don’t work. Whole sequences take you nowhere. There’s one particularly awful bit with Radagast the Brown trying to save the life of a hedgehog. It was like a bad low-rent episode of Lassie. It felt like something you’d see on Nickelodeon at 1:00 in the afternoon.

Thirdly, how you can make a three-hour film and not find time for the characters to breathe is beyond me. Granted, there were a lot of dwarves, but ask me to tell you about them. Please.

There’s Oogin, and Frumpkin, and Norbit, and Loogie, Doogie, and Snookie.

There was Thorin. He was the leader and he was bitter and judgmental, like me. Then there was the one played by James Nesbitt, who I like and I had just seen in Millions. I don’t remember which dwarf he played, maybe Sneezy? Then there was an old one. He had a white beard. And a young one. That’s twelve, right? What?! Only four? Well. There were a bunch of dwarves. I spent three hours with them. I think one was named Oin, another Floin, and a third Groin.

And thinking about that, I’m reminded of Red Letter Media’s brilliant takedown of The Phantom Menace. You know, the one in which they point out how easy it was to describe the characters of Luke and Leia but how impossible it was to say anything meaningful about any of the prequel roles?

Yeah. That about sums up The Hobbit.

There may have been four fewer members of The Fellowship then there were members of Thorin’s party, but still. I’d have no problem writing you a 500 word essay about any LOTR character. I’ve already told you all I remember about the dwarves and I just saw that movie tonight. I don’t even have much to say about Bilbo. He was timid? Uh. Sometimes? 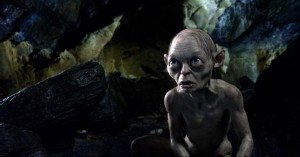 I did not hate the part with Gollum.

Part of the reason I don’t know anything about the characters in The Hobbit is because every twenty minutes there’s some ginormous action sequence that plays with the emotional impact of a game of Frogger. Insurmountable odds overwhelm our heroes but then a scene later—when the odds get exponentially worse—they’re somehow all tally ho! and take that you scoundrel! and let us just conveniently ride this rickety bridge as it free-falls 500 meters down a crevasse.

Bullshit. Boring. Dumb. And worst of all, so painfully familiar. Pretty much everything in The Hobbit was exactly like something you’d already seen in The Lord of the Rings minus all of the impact. Giant eagles, check. Talking to butterflies, check. Gandalf using scary voice, check. And on and on. Even the music was the same. The same themes overlaid on top of cheap imitation scenes as if to poke you and whisper, “Hey. You. Feel something!”

Now, The Hobbit is a kids book, so I’m not surprised this wasn’t as grim as LOTR. But kids stuff doesn’t have to be lame. There was a ton of emotion and threat in Babe and I just bought that for my littlest niece.

Also, after the trailer for The Host ran, SB yelled, “wooo!” and everyone laughed. Because the trailer looked so extremely terrible. That was good too. So four things.

So, to summarize, I loved The Hobbit. You should go see it in 6D at 96 fps in double-IMAX. I’m already in line for the next one.

4 responses on “They Call Me Mr. Hobbitterness”