In another life I worked as a celebrity assistant. One time, someone asked my boss about a particular film he had made, one that got widely panned. He took on a pained expression and agreed it was a stinker.

I expect the people involved in making 1975’s The Drowning Pool might have said the same thing about their film, except you can substitute ‘thrilling’ and ‘sexy’ for ‘funny.’ 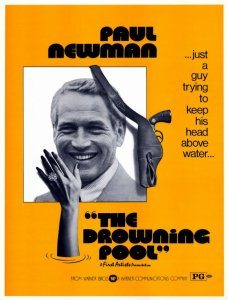 A sequel to the much better Harper, The Drowning Pool brings back Paul Newman as Lew Harper (neé Archer in the original Ross MacDonald novels), a private detective of the Sam Spade school.

In this story, an old flame, Iris (Newman’s wife Joanne Woodward) brings Harper to New Orleans to help out with a blackmailer. As in Harper, and as in MacDonald’s novels, the plot is complicated with a plethora of false paths and decorated with a veneer of disreputable characters.

If you glanced at the cast list, you’d — like me — expect that nothing could go too far wrong in The Drowning Pool. Murray Hamilton, who kept the beaches open in Jaws and got cuckolded in The Graduate, gnaws on the scenery and anything else handy as he acts out a caricature of an upstart oil tycoon. Baby faced Andrew Robinson gives a turn as suspected blackmailer Pat Reavis, but imbues the thin part with significantly less panache than his Scorpio Killer got in Dirty Harry. Among the other famous faces — Paul Newman’s, right? — is 17-year old Melanie Griffith, who plays Iris’ jailbait daughter with as much vim and only a tad more clothing than she gave her role in Night Moves, which came out the same year.

Melonie gets melon-y. Get it? It’s a boob joke.

The film starts well, though. Whereas Harper’s opening scene perfectly introduced us to our protagonist, this one — directed by Stuart Rosenberg, who also helmed Cool Hand Luke — gives us a brief history lesson. Harper gets into a rental car and can’t get the ‘fasten seatbelt’ buzzer to stop nagging him. So he pulls the fuse in well-telegraphed shorthand for “I don’t heed warnings.”

The Drowning Pool mostly goes downhill from there.

We’re going to the ice-cream factory and see how ice-cream’s made. Now anybody who doesn’t wanna go can get off right here.

Rosenberg’s direction is tepid. Newman does his best, but his heart doesn’t seem in it and he’s lacking support. The script’s first draft was written by Walter Hill, but not so you’d notice. Everything just lacks energy. The amount of spark — even between Newman and his wife — is negligible.

It isn’t long after Harper meets Iris in some odd French Quarter shop that you’re wondering why all the supporting cast members are acting in different films. Some of them are performing in good little nail biters, like Melanie Griffith — who may or may not be acting, but lets not quibble. Others, like Murray Hamilton, seem to be in outtakes from Live and Let Die. One expects him to run across a swamp on the back of alligators or get inflated until he explodes.

I didn’t hate The Drowning Pool. It’s not loathsome; it’s just lukewarm. Which I suppose is a decent temperature for a pool one’s meant to drown in. You might enjoy the set piece climax that goes down (yuk yuk) in a flooding hydrotherapy room with a decent Mavis Strickland. You might also get a kick out of Richard Jaeckel’s hammy turn as the trigger happy cop, Lieutenant Franks.

While Harper was shot by Conrad Hall, this one is lensed by Gordon Willis. Again, you’d think it would reflect some of that fine pedigree but not really. There are a few nice moments of the trademark Willis darkness, but no one will hold this film up as among his best work.

In the end, it’s just a muddling little detective film. The Drowning Pool has a lot going for it, but these elements just don’t float.