There exists no better medium for approximating dreams than film. Dreams and movies work in images to tell a story or impart a feeling or remind your brain of something it forgot it knew. Neither requires words, though each may contain them. They may be wholly indirect and suggestive. People might be themselves or someone else or both. Objects too are sometimes exactly what they are, and other times exactly what they are not. To describe certain dreams and certain movies is to destroy them; they make sense when experienced and lose all meaning when forced into words. 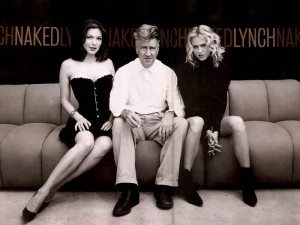 David Lynch is notorious (in a good way) for never telling interviewers what his movies mean. Lynch has a way of crawling down into his subconscious, unscrewing its lid, and letting everything in there ooze out into his movies. To Lynch, the point is not then to explain what those subconscious images mean. His job is to put them on screen. It’s up to the audience to decide what they signify, or if they signify anything concrete at all. In Mulholland Drive it’s enough to grasp that the first, longer part of the movie is the dream of a character seen in the second part. To then look for precise one-to-one correspondences between the dream and reality is, while fun and at times revealing, not required to “get” the movie. The logic of the images is enough to trigger an understanding inside one’s head. To me it’s logical to say of certain movies, “It makes perfect sense, but I can’t tell you why or how.” These movies just feel right. 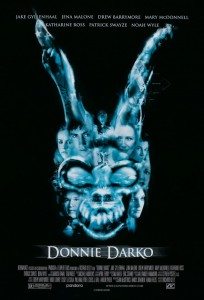 Donnie Darko (’01) is a movie that to me is best left unexplained. I saw it for the first time when it opened. All I knew about it was that the poster featured a weird and scary rabbit head. This was enough (poster makers take note). I went with a friend. We both thought it was great. It gave us a lot to talk about, to make sense of its time-travel/alternate-universe/demon-bunny-from-the-unconscious storyline. Which was more like the icing on the cake, this discussion. Because even without trying to put into words what the movie’s story was really doing, we came out of the theater satisfied. Similar to a dream, the movie made sense well before we tried to voice what that sense was.

Not only was there enough explantion in the theatrical version of Donnie Darko to give it a feeling of narrative cohesion and logic, there was also something even more important, or more exactly a lack of something: there wasn’t too much explanation. There was just enough. This is a fine line to walk, and Donnie Darko walks it just right. 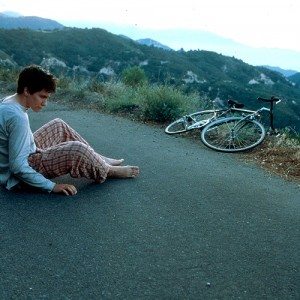 What happens when you put it into words? Let’s give it a shot. We see two possible realities in the movie, two realities linked by a jet engine falling from one reality into the past of the other. Donnie Darko (Jake Gyllenhaal) is awoken in the past reality by a part of the future to come, the demon bunny Frank. Frank tells Donnie to do things like flood the school and burn down the house of motivational speaker/child porn dealer Jim Cunningham (Patrick Swayze), and tells Donnie about time travel and the coming end of the world. Each of these things causes the story to advance toward its inevitable conclusion. 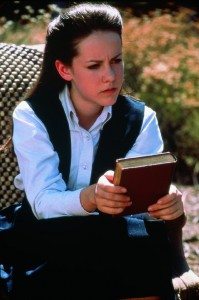 Donnie floods the school, and thereby meets Gretchen (Jena Malone), who becomes his girlfriend. He talks to his teacher about time travel and is given the book The Philosophy of Time Travel by Robert Sparrow, a 101 year old woman the kids call Grandma Death, whose house will be the site of the finale. He burns down Cunningham’s house which reveals the man to have a kiddie porn dungeon, causing the insane gym teacher, Kitty (a memorably loopy Beth Grant), to ask Donnie’s mom to chaperone Sparkle Motion to California so that she can stay behind to aid her slandered friend Cunningham. Donnie’s mom gets an earlier plane home, which plane drops an engine mid-flight…

Most important of all, it’s Donnie’s first encounter with Frank that saves him from being crushed to death by the falling engine and allows this alternate reality to exist in the first place.

As the date and time of Frank’s proclaimed end of the world arrives, Donnie and Gretchen go to Grandma Death’s house, enter her cellar door, only to find two high school thugs in the act of burglary. In the scuffle, Gretchen is thrown into the road, where Frank, in his halloween bunny costume, accidentally runs her over, killing her. Donnie shoots Frank through the eye. Which Frank, we’ve since learned, is Donnie’s sister’s boyfriend. This is the end of the world the Bunny Frank spoke of. Donnie races backwards through the preceding month and finds himself in bed the night of the jet engine, laughing at his final understanding of what he’s lived through and what it means. He doesn’t get out of bed this time, the engine crushes him, and Gretchen and Frank live on. As the camera pans across the faces of all the characters in the movie, it’s as though they have a dreamlike sense they can’t put a name to of what’s occurred, of having played a role they don’t know the meaning of, and in Frank’s case of having narrowly averted death, his hand going to his eye as if in memory of the bullet lodged there a month in the future in an alternate reality.

Donnie looks into another universe

During Gretchen and Donnie’s first conversation, she tells him his name sounds like a superhero. He says, “What makes you think I’m not?” In the end, he is. He sacrifices himself to save her. 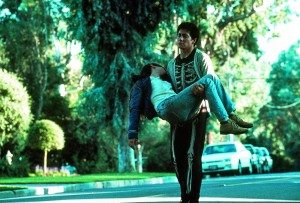 Turns out I’m far more intrigued by movie posters featuring giant scary bunny heads than the general public. Donnie Darko bombed when it opened. It found life on video, where it eventually garnered cult hit status. It was so popular that first-time writer/director Richard Kelly was given a chance to create a director’s cut closer to what he’d wanted the movie to be all along.

I watched this cut when it appeared in ’04 and hated it. Something like 20 minutes of scenes were added, along with new special effects and far more explanation of everything. This cut is way too long, the pacing is off, the special effects are distracting, the excessive explanation doesn’t add anything. I found it very upsetting. Why mess with such a good movie? 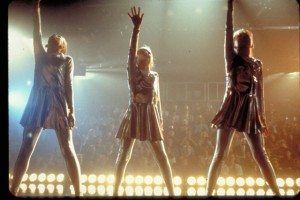 I think the reason is the opposite of Lynch’s strategy. Kelly has a very precise idea of what’s going on logically in Donnie Darko, and he wants people to know about it. Not only does his director’s cut add in all kinds of explanatory material, but so too does the offical website for the movie, which gives an extremely detailed explanation of what’s going on, full of fancy terminology. So we learn that there’s a tangent universe, a primary universe, a tangential vortex, an artifact (the engine), a living receiver (Donnie), manipulated dead and manipulated living (i.e. living and dead characters in the tangent universe), plans called ensurance traps enacted to ensure that the receiver returns the artifact and restores the primary universe, and so on and on and on.

Which in its own way is interesting. I like obsessive pseudo-scientific jibber-jabber as much as the next science fiction movie nerd. But does it add to the movie? For me, it subtracts. I prefer to think of Donnie as a kind of superhero, and that it’s his choice to die in the end to save the lives of others. Using Kelly’s logic, all of these manipulated dead and living are doing what they do to force Donnie’s hand. By killing his girlfriend and turning him into a murderer, the manipulated living and dead give Donnie no choice but to restore the primary universe. Which is logical. But emotionally I think far less compelling.

the arrow of the future

The director’s cut of Donnie Darko is a perfect example of over-explaining a dream to the point where it loses its magic. All of that terminology and so on is an excellent backstory and source of logic for the writer, but it doesn’t need to be made explicit. In this case, adding so much into the movie kills the beauty of what was there before, a dreamlike movie in which the characters themselves are presented as only having a dreamlike grasp of what’s going on around them. To add more explanation is not only to lessen the experience of us, the viewers, but it undercuts the characters themselves. 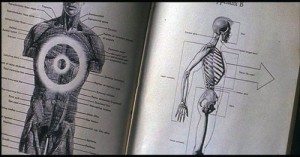 It’s a bad sign for a movie if you need outside explanations to make it work. Perhaps it was the general sense of confusion people voiced initially that led Kelly to want to explain himself more, to make it clear that he’d worked out all the logic and that everything made perfect sense given the reality he’d invented. Which is too bad, because whether the logic of a movie arrives mysteriously from the subconscious or from a meticulously worked-out imaginary science, over-explaining it is the best way to lose its sense of dream logic and inevitability.

And of course all of this over-explanation detracts as well from the heart of Donnie Darko, which is simply the story of a troubled teenager, one that for all its science fiction elements feels real in a way few other teen movies do. 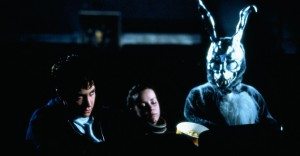