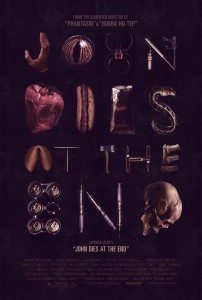 Right now there is a completely avoidable tragedy afflicting untold millions of Americans. They do not have the chance to see Don Coscarelli’s John Dies at the End in a proper cinema.

Hearing this dreadful news makes now an appropriate time to rend your clothes and thrash about, particularly if you are attractively built. Or if your clothes are on fire. Or both.

I’ve been singing the praises of John Dies since we caught it at the San Francisco International Film Festival months ago. This week, it’s playing in San Francisco and Berkeley. It’s also playing in select cities around the country over the next few weeks (check your local access here). I highly recommend a trip to see it. This is exactly the sort of film you are needed to support so there can be more films like this to need your support.

I just paid to see it again. This second viewing only more firmly established its awesomeness. 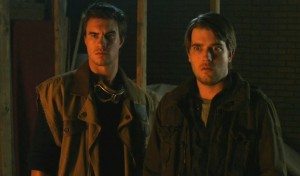 It is difficult to describe exactly what makes John Dies at the End so successful. The story is anything but simple. Two young roustabouts are chosen by a mysterious pan-dimensional living pharmaceutical known as Soy Sauce. Under its influence, they are no longer bound by such trivialities as time, space, or sensibility. Penis-shaped doorknobs remain tricky to negotiate, however.

There is a story. It makes as much sense as it needs to when it needs to. Even when it doesn’t need to, it stays busy grabbing you by the lapels and shaking your skull loose, just like that time you experimented with an electrified bong in college. 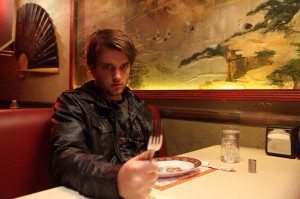 Pretty much every sequence one-ups the previous one in terms of sheer bizarreness. The cast—mostly new discoveries plus well-loved character actors—turn themselves inside out to wring every last drop of gusto from their emotive glands. Whether they’re displaying terror or insouciance or supremely stoned confusion, that comes across in spades. Spades driven forcefully into and through your neck.

Chase Williamson, as David Wong, is particularly due praise. You’ll also watch this film and remember why you used to love Paul Giamatti. His parking lot freakout scene puts him up there with Shelly Duvall losing it in the bathroom. Well, that may be hyperbole, but he’s good. And then you’ll recognize and dig the underrated Clancy Brown as Dr. Marconi and Glynn Turman from The Wire, and Doug Jones and Angus Scrimm, too.

I was born a poor black child.

On second viewing, John Dies at the End wasn’t quite as full of head-exploding surprise. It was, however, much more apparent how in control Coscerelli was despite the lack of big budget support. Effects get rubbery and the CGI looks a bit-SyFy, but there’s nothing wrong with way scenes are assembled in overlapping shots of variable focus and depth. You feel as fucked up as Dave and John just sitting in your seat. 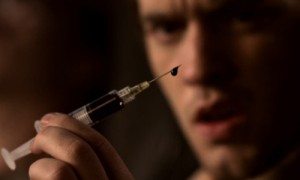 The effects will last the rest of your life, or longer.

And humor. For those of you squirming in your skivvies for the new version of Evil Dead, I’ve got a heads-up. That’s not going to be funny. You expecting it to be funny? That’s funny. If you want some laughs wrapped around a core of diabolically creepy otherworldly weirdness, what you want is John Dies at the End.

That’s right. I just compared this film to Evil Dead II and that comparison is fair. John and Dave don’t get as hard-core gory as Ash, but they’re not out on any picnic with Mouseketeers. John Dies at the End is chocko with decapitations, giant spider things, a meat monster, toothy chest-slugs, and some sort of prescient hot-pot squid stew that’s going to take over our reality.

Unless John and Dave stop screwing around with being dead and whoop some ass.