According to festival reviewers (SF Indie Fest and others), The Legend of Kaspar Hauser combines the lyrical beauty of Antonioni with the psychedelic brain squeezing of Jodorowsky. The trailer looked intriguing, and the film was running before Sightseers, which I wanted to see, so we went.

Kaspar Hauser is like this. Set up a camera. Put Vincent Gallo in front of it in a costume. Turn it on. Let Vincent Gallo say whatever he wants for about five minutes. Most of what he wants to say is, “Yeah. Yeah. Yeah” followed by a literal description of what he is doing—in case you are blind and/or stupid. 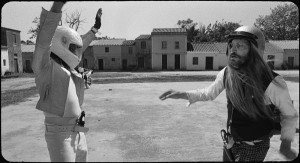 You know what would be really arty? No. I guess you don’t.

There are some other characters. There is some electronic music. A girl/boy washes out of the sea wearing headphones and spits up some milk. Then they ride around on a mule in small circles for a long while.

This film looks as much like Antonioni as a GoDaddy commercial. Jodorowsky’s films are nuts but in an engaging way. This was just dull, sloppy, and pointless.

And I didn’t have the heart to watch it all. It was like being stuck in a closet with some friend of a friend who’s had way too much to drink, done a lot of cocaine, and wants to tell you a story about a dream his dog had.