The protagonist of Quentin Dupieux’s last film was a tire. It was a hostage drama (in which you were the hostage) and I thought it was excellently weird. This time out, the French director and musician (a.k.a. Mr. Oizu) has gone more traditional.

In Wrong, our hero is just an everyday joe (Jack Plotnick as Dolph) who wakes up with his alarm at 7:60 to feed his dog, deal with his full-time gardener (Éric Judor), and go to work at the job he was fired from three months ago. He just likes it there.

So yes. In Wrong everything is a bit off—wrong, even. At the same time, it all feels oddly right and that’s why Dupieux’s films are worth watching. They’re so crazy that they just might work. 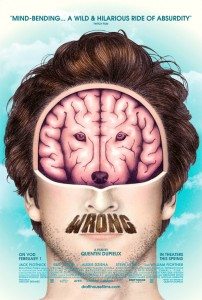 Again here he scrapes off the familiar skin of our routines to reveal the muscles beneath—the sinew that reflexively controls our lives. Reappraise your actions. Reconsider your speech. Wake up and remember what’s right with Wrong.

I don’t mean to suggest that this extremely strange film is a simply deciphered parable. It is not. It is, however, a catalyst for thought and a spark for emotional resonance. From its opening scene in which a fireman takes a dump in the middle of the street while his comrades loaf about and watch a van burn, you are challenged to make sense.

Why shouldn’t 7:60 come one minute after 7:59? Why shouldn’t you have a nice long conversation with the woman taking pizza delivery orders concerning the symbolic meaning of their corporate mascot? Why shouldn’t some long-standing organization kidnap your pet so you can feel a closer attachement to it upon your eventual reunion? 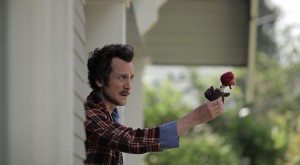 Why not? Make sense.

What elements of our lives are important to us and what do we simply perform like steps in a tired line dance? Can we even recognize what we’d miss before it’s gone? What if those things are a linear plot and genre tropes?

For Dolph Springer, his dog is his life. And his dog is missing. All around him crazy characters go about their day—just as Dolph does—as if their oddities are unsurprising. They’re right. Everyone is so focused on their own passions they don’t have time to deal with irregularity, even when it’s cataclysmically weird. Dolph acknowledges the surrounding struggle and confusion, but he doesn’t let it in. He only cares about being reunited with Paul. All the other pressures of his life are just pressures.

He doesn’t care about genre tropes; he just wants his dog back. 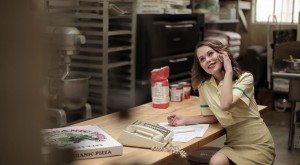 You don’t want a pizza? Let’s get married.

Just because the film’s world seems weird doesn’t mean it’s any weirder than what you do every day. In fact, much of the dialogue in the picture feels perfectly natural—assuming you pretend that the people speaking have never been in a conversation before in their lives. Characters express themselves honestly and clearly, just without any of the rigamarole that clogs up normal communication.

As a film, Wrong also does a better job than most at constructing characters you care about despite the surreality. Jack Plotnick plays Dolph perfectly straight. His frustration and fury build as believably as if he were in 12 Angry Men. His expression of anguish when his alarm goes off is true art. The supporting players, notably William Fitchner as Master Chang and Mark Burnham as the Cop, all bullseye their parts. Donna Morong cast this film and if she can take credit for even a few of these actors, she deserves a medal. 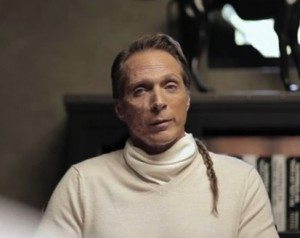 The accent was his idea.

Like in Rubber, Dupieux takes loving care to expose the inner thighs of modern filmmaking. What makes up a romance? Strip it down and deliver it with a free pizza. Want a taste of techno-thriller? Okay. How about we recover the memories of a dog turd and enhance. What happens next? You know. Everything wrong and one thing right.