Today is Valentine’s Day and what could be more romantic than being pigeonholed? 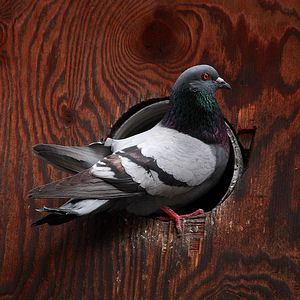 Now that I’ve written that sentence, I feel the need to clarify: ‘being pigeonholed’ isn’t, to my knowledge, a euphemism for doing obscene things with feathers. No no. It means to be stuck in your own particular little box, like a captive bird, or Helena.

Maybe I should start again?

Sometimes, the craziest role an actor is asked to play is themselves. I just blew your mind, right?  How can you act like yourself, except like, you do that all the time!

Being cast as yourself is the ultimate in typecasting. No one could be expected to be better at being you than you, right? But what if “you” are supposed to be “you” in an unreal situation? Wouldn’t that be romantic?

No? Well romance isn’t everything. Who cares about Valentine’s Day anyway? This is my double feature post and I’m going with it. Watching these movies with a lover won’t actively encourage them to leave you. Probably. 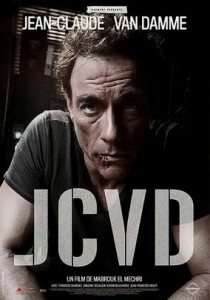 Have you watched any of Jean-Claude Van Damme’s films? If so, you might reasonably feel like you’ve seen them all—except for JCVD. This 2008 through-the-rabbit-hole number could be described as the love child of Jean-Luc Goddard and Charlie Kaufman.

In the film, the Muscles from Brussels plays an alternate-reality version of himself. Exactly how alternate is up for speculation, though. The film’s JCVD is totally broke, in the midst of painful custody proceedings, dealing with substance abuse, and making any crappy action flick he can get his face into.

Step back to reality and look at 2008’s Jean-Claude Van Damme. Dealing with substance abuse? Check. The man had a serious cocaine problem. Custody battles? Yup. His fourth wife, Darcy LaPier, is still blocking the actor from seeing his youngest son, Nicholas, via the courts. Totally broke? According Jean-Claude, he was actually living on the streets of L.A. and starving when JCVD came out. Making any crappy action flick he can? Yes to that, too. By 2008, Van Damme’s career had completely crashed. Six box-office flops in a row. 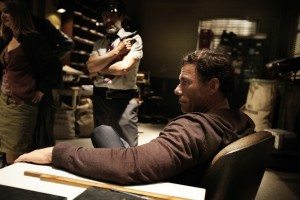 So back to the film, in which JCVD returns to his hometown in Brussels, where he gets caught up in a bank robbery and confused by the media for one of the criminals.

You think this is easy?

JCVD doesn’t flinch in answering this question. It jumps right into the thick of media hysteria, star fucking, and the illusions of celebrity. It also features a 6-minute, one-take monologue in which Jean-Claude Van Damme lets you—the audience—have it about his life, his career, and his personal problems.

Is the film any good, though? Why yes. Yes it is. In fact, Time magazine called JCVD‘s lead performance the year’s second best—after Heath Ledger’s Joker. The film gets a little pear-shaped by the end, but never-you-mind. It is unlike anything else you’ve seen and you’ll never watch another Van Damme film in the same blasé way again. 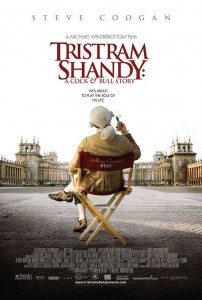 I have a good idea! Let’s make a movie about guys making a movie out of book that’s about a guy who can’t manage to write a book. And, since it’s a making-of style film about a film about a book, we’ll need the actors to play themselves playing themselves.

Did I just out meta you? Boosh! You’re welcome.

So there was this 18th century nine-volume novel, called The Life and Times of Tristram Shandy, Gentlemen. It’s written as if it’s Tristram himself narrating his life story, but the character of Tristram is incapable of getting to anything resembling a point—so much so that he doesn’t even get to his own birth, in the story of his life, until volume three. 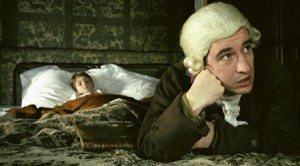 This is me playing me playing a guy who’s next to a guy playing the same guy. In bed.

It’s an elaborate white-gloved joke. And it’s also one of the first mash-ups, since the author Laurence Sterne borrowed liberally from other authors, just rearranging things to make ideas more-so. Or plagiarizing. Tomato, tomāto.

In this century, director Michael Winterbottom made a mockumentary about the making of a pretend film version of the book staring comedians Steve Coogan and Rob Brydon. It is practically impossible to write a sentence about this film that is not overrun with clauses. I am sorry.

Right. So. Coogan and Brydon play themselves playing Tristram and his uncle Toby. Both actors are well-known figures to British television audiences (and more erudite Americans). In Cock and Bull Story, they play exaggerated versions of themselves. They amp up their insecurities and foibles and drag the whole frothy formula down like a collapsed soufflé.

It’s quite funny in a schadenfreude-filled way.  It’s also not really about anything so much as it’s about itself. Self-reflexivity is the spiral. Hop on board.

Do we get to really watch Steve Coogan and Rob Brydon act like themselves here? Yes and no and yes. And maybe. Still not sure? Watch Winterbottom’s follow-up BBC series The Trip, available in the States as film also starring Coogan and Brydon as themselves/not themselves.

What? You demand more? Okay.

Here is the unaired pilot for Ben Stiller’s best work—a television show featuring Jack Black as an astronaut who got too close to the sun, his talking motorcycle (Owen Wilson) and the unstoppable NASA agent/respected actor who wants to kill them, Ron Silver as Ron Silver.

And if you think that sounds worth watching, you’re right.