It seems this is the week to pick up old habits. That’s not a euphemism for cruising for elderly nuns—it means we’re revisiting long-languishing features here at Stand By For Mind Control.

To wit: the Best of Netflix Streaming! Today’s recommendation… 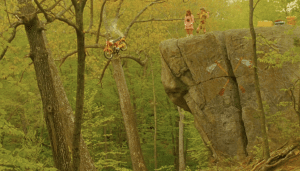 It’s funny, because the exact same thing happened to me once.

Last year, people turned their twee-meters up to eleven and watched Wes Anderson’s latest film, Moonrise Kingdom. You remember; this was the movie in which everything seemed to be a perfectly recreated doll house miniature version of something real and everyone was just like an actual person, only a bit odd in an accentuated way.

It’s a style that many people love, myself included to a degree.

Despite what people pronounce, however, this isn’t how Wes Anderson always made movies. His style has evolved. Or run rampant. Take your pick. 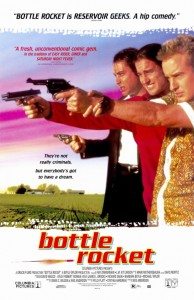 In the days of yore, only one or two of the characters in Wes Anderson films were odd and only some of the elements were fetishistically cute enough to strangle you to death in your sleep like a deranged, brand-name, fabric softener bear. Yea, verily, the trajectory of Anderson’s twee-ness has been on the rise. And that means if we travel back in time [everyone now, make with the wavy fingers and go “boodle-oodle-oo, boodle-oodle-oo, boodle-oodle-oo”] we can find the perfect moment in his artistic development—when his films were full of wonder and yet also of the real world—and then we can go back one more film, to his first feature.

Because really Rushmore is his best film, but that’s not on Netflix streaming, so we’re going to watch Bottle Rocket, which is also damned good.

Bottle Rocket is a meandering tale of misplaced desires. It is a heist picture I suppose, but comparing it to Ocean’s Eleven is like comparing Bubba Ho-Top to Rosemary’s Baby. One isn’t better or worse—they’re just as different as two films in the same genre can be.

Bottle Rocket is, yes, kooky but it remains populated with empathetic characters. It is a story in which the real world exists all around, smothering in its mundaneness, unless you’re with Dignan. 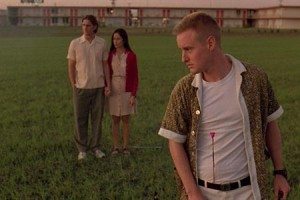 Dignan wants to be a criminal.

And as off-kilter as Dignan is, he’s charismatic enough to convince his friends to join him on his 75-year plan to achieve greatness through larceny. Chief among these mates is Anthony, who’s checked himself into a mental health facility to recover from exhaustion, and then there’s Bob who is they only one they know who owns a car. Together the three of them pull off—or fail to pull off—some of the most pathetic heists you’ve ever seen.

It’s like if your twelve-year old kid brother decided to play cops and robbers and you joined the game to discover your brother was wanted in four states.

Did I mention that Dignan is played by Owen Wilson and that Luke Wilson is Anthony? Both in their first screen appearances? Yeah. So love them or hate them or feel indifferent towards them, this is the film that deposited their faces in front of yours. And the great James Caan plays Mr. Henry, a local criminal of some renown whom Dignan wants to get in good with, god help him. 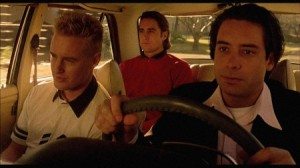 My favorite Wilson brother was the one in Castaway.

Watch Bottle Rocket and take note of the world Wes Anderson builds. Ask yourself who’s odd and who’s more-or-less normal. See what’s cute and weird and meticulously staged and what’s just a normal place or an everyday thing that skews nutty when the Dignan effect hits.

Then watch pretty much any other Wes Anderson film and compare your findings.

What level of oddness in these films creates a surreal effect and how much removes you from the story? That is a question I find interesting. At what point does style overcome story? Certainly the answer is subjective, but if people ask why I’ve gone a little soft on Wes Anderson, that’s what I’ve got to discuss.

Rushmore, as I mentioned, is my favorite Anderson film, followed by Bottle Rocket. I’m also fond of The Darjeeling Limited and The Royal Tenenbaums and others, although less moved by them to varying degrees.

But back to Bottle Rocket, which is a gentle film—a real indie indie that goes where it wants to and never at speed. This is the kind of picture you can and should relax into. You hang out with Bottle Rocket and just enjoy its company. It is a swell kind of fellow. Like your odd friend Max Fischer.