If you’ve seen a lot of movies, and you have, you know all about being a hit man. All the tension, the stress, the long hours. It’s a tough job. Or possibly you are a hit man. If you are a hit man and you’re reading this, I hope you offer your thoughts in the comments. In any case, the life of the hit man is a strange and lonely one. Who can you trust? No one. Well, okay, not no one, you have to confide in one person, maybe your girlfriend, or the ice cream man, a priest, or your long lost brother you tell everything to in the handwritten letters you send every week…even though he died twenty years ago! You have no real friends. Of if you do, they never really know you. You have a pet bird. Or many birds. Because, you know, they fly, and you wish nothing more than to fly away as they do. Maybe? I don’t know for sure. Hit men never say what they’re thinking.

Your one source of contact is a man you probably owe your life to. He assigns you your jobs. You execute them with precision. So to speak. Only problem is, sooner or later, your boss is going to tire of you, and you’ll be another hit man’s assignment. Happens every time.

You find solace in studying the ways of the ancient samurai. You imagine yourself to be one of them. You live your life by their code. Above all, yours is a noble calling, and you will act it out nobly, all the way to the bitter end. You will die, but you will not be taken by surprise. No, when you die, it is on your terms. You allow yourself to be killed. For that is the way of the samurai.

This week’s double bill consists of two movies about cool hit men I haven’t seen for a long time. I’m going to watch this double bill soon myself. The second is in part inspired by the first. Call it an homage if you like. First up: 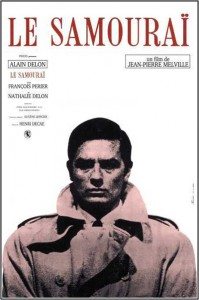 French director Jean-Pierre Melville is best known for his noirish crime films Bob le Flambeur (1950), Le Cercle Rouge (1970), and Le Samouraï. Le Samouraï opens with a quote from a fictional samurai book. Melville liked to start movies with made-up quotes, such as one he attributes to the Buddha in Le Cercle Rouge. That movie was one of the first heist films, featuring a meticulously enacted half hour heist as its centerpience. Le Samouraï is more like a film noir. It begins as so many noirs do, with a character who you know will be lucky to make it to end of the movie alive.

Alain Delon plays the hit man Costello. He is taciturn and serious. He has a pet bird. He always wears his hat (Costello, not the bird). He has a lover he uses as an alibi. He is very careful and professional. 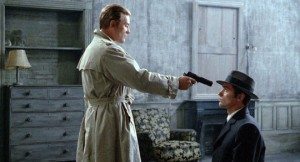 if you’re going to get shot, best to do it this stylishly

The thing is, you can never be cautious enough as a hit man. Whoever hired you knows you exist. In Costello’s case, his employers decide it’s time to relieve him of his duties. Permanently. Forever. And ever. I mean they want to kill him. Dead. You’re with me here? 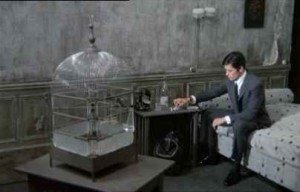 a man and his bird

Hit men who fancy themselves samurai are hard to kill, it turns out. Costello takes matters in hand and the body count rises. I’d tell you more, but I don’t want to give it all away. Also, I don’t remember what happens. It’s been a long time. I do know that what happens happens very stylishly, in a bleak, late ‘60s kind of French way. And there’s a great bit with his hat at the very end. Good stuff, people. 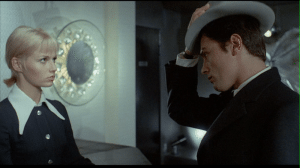 don’t forget to check your hat 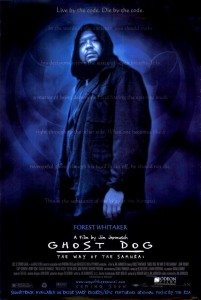 Jim Jarmusch wrote Ghost Dog with Forest Whitaker in mind for its eponymous hero, a loner gunman who follows Hagekure: The Book of The Samurai, quotes from which act as chapter breaks. It’s a code that sets as its premise the idea that in a sense, the samurai is a dead man, and must live as one who has already died. There is no doubt as to how this movie will end.

The story is much the same as Le Samouraï (and is indeed clearly inspired by it). Ghost Dog’s master decides after a hit gone slightly wrong that he must be disposed of. And Ghost Dog will not go down easily. The people he works for are Italian mobsters trying to hold on to their old way of life and failing to do so. They’re kind of feeble and sad and funny. It is only Ghost Dog, with his adherence to the ways of the samurai, who truly lives by a code, and follows it with honor, however irrationally it makes him act. After all, he uses it to justify his chosen profession. 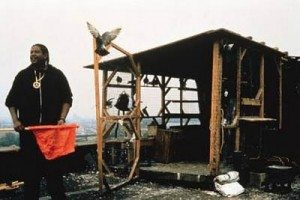 Like Campbell in Le Samouraï, Ghost Dog has a bird. Or birds, rather. He keeps pigeons on the roof of his building. His only friends are a Haitian ice cream man who speaks only French, and a little girl he gives the book Rashomon to. Ghost Dog and the ice cream man completely fail to understand one another on the level of language, yet they’re friends. Which is perhaps a more important kind of understanding. 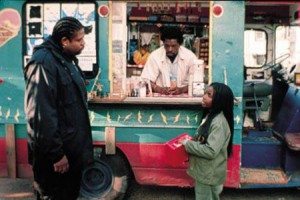 Ghost Dog and his pals

Ghost Dog is a strange man. He works for the mob, he follows an archaic Japanese code, and he’s willing to die for a spiritual bond that his boss isn’t even aware of. He’s certainly a compelling character, one of Jarmusch’s best. Maybe one of his weirdest, too. Also appearing briefly is Gary Farmer as his character Nobody from Dead Man. Short scenes from cartoons play throughout the movie, each one of which comments on or foreshadows events.

The music is by RZA of Wu-Tang Clan fame, his first work scoring a movie. Jarmusch knows how to use music in his movies (Tom Waits in Down By Law, Neil Young in Dead Man, Mulatu Astatke in Broken Flowers), and the dark mood set by RZA propels the movie forward. 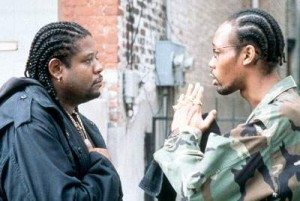 RZA gets a cameo

It’s a peculiar mix of genres going on in Ghost Dog, that’s for sure. A mix of samurai wisdom, mob movies, and hip-hop, where you’re not always sure if anything’s supposed to be tongue-in-cheek or deadly serious. Probably some of both. 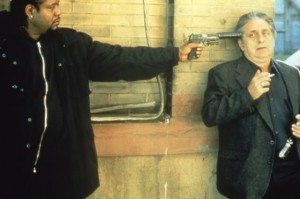