If I asked you to name that George Roy Hill film, you know, the one written by William Goldman and starring those two handsome dudes, Robert Redford and, uh, the other one? 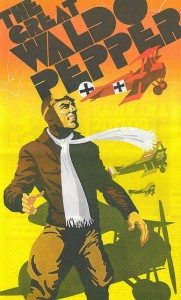 You’d say that’s Butch Cassidy and the Sundance Kid. And you’d be right. But you’d also be right if you said The Great Waldo Pepper.

Despite its incredibly stupid name, Waldo Pepper is a film worth your time.

The film came out in 1975—after Butch—and it wasn’t particularly successful. It was called The Great Waldo Pepper, so yeah, that may be part of the reason why people didn’t flock to see it. I would also suggest that another reason why it didn’t blow audiences away is because it’s not a story about real-time action, but rather one about events remembered. It is a vortex of nostalgia.

It’s a cloud of a film. It’s there, you can see its shape, but when you grab for it: nothing you can take with you. That’s what memory is.

In the film, Redford plays the eponymous Waldo Pepper, a Great War pilot who’s making his way through the 20’s as a barnstormer. Waldo entered the war late and he never really got the chance to prove his bravery—something he makes up for by risking his life performing aerial stunts. The film chronicles the end of this era and the advent of modern aviation. Like Butch Cassidy and the Sundance Kid, it focuses on characters who discover with chagrin that progress has written them off the guest list.

Susan Sarandon is actually the wind beneath my wings.

If you’ve seen Butch Cassidy, Waldo Pepper follows a similar trajectory. We get romance (with Susan Sarandon and Margot Kidder) and adventure (with Bo Swenson and Bo Brundin = double Bo! Bobo?) and the grasping hand of the law (our pal Geoffrey Lewis). The ending is also reminiscent of Hill’s Western, as our heroes succeed only so far as they stick to their guns despite the mounting odds and the inevitability of progress.

What makes The Great Waldo Pepper most interesting, however, is the film’s climax. Even though the picture is filled with crazy (practical) aeronautical stunts, dogfights, and crashes, the climax involves none of these thrills. The climax is two men stealing a moment together to reminisce.

In order to explain, I have to reveal a good chunk of the film’s plot, so I suggest you watch it first—it’s available on Netflix streaming—and then read on.

I will fly like the condor. For three days.

In the beginning of the film, Waldo twice tells a story of how he tangled with famed German air ace Ernst Kessler and survived. Kessler shot down all four of Waldo’s companions but when Waldo’s guns jammed in the middle of the battle, Kessler saluted him and let him live to fight another day.

Thing is, the story—while true as far as the film is concerned—didn’t happen to Waldo; it happened to another pilot. Waldo only wishes he got the chance to face off against Kessler. And so Waldo Pepper is a story about missed opportunities. It’s about having the right stuff at the wrong time. Waldo Pepper is a day late, a dollar short, and named after an off-brand snack food.

Through the course of the film, tragedy after tragedy piles in on poor Pepper despite, or even because of, his bravery and perfect teeth. Waldo is permanently grounded by the newly created Civil Aeronautics Authority and has to fly under an assumed name. Later, hiding out in Hollywood, he gets a stunt pilot gig flying a Sopwith Camel in a film recreating the exact air battle with Ernst Kessler that he’d previously claimed to have survived. 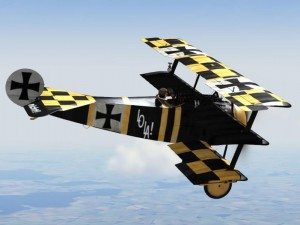 It’s a slap in the face. Not only did Waldo miss his chance to do battle with Kessler and show the world how good a pilot he was, now he’s in a crummy recreation and flying under an assumed name at that.

This is a perfectly thrown William Goldman curveball.

Waldo, squashed by failure, looks up to discover that the other stunt pilot, the one who’s flying the German Fokker that’s meant to be Kessler’s—is none other than Ernst Kessler himself. The German, in debt and dejected, requests that Pepper fly as his main adversary in the film.

If this was a movie made today, or a film made by someone less certain of what he or she was doing, there’d be some giant musical cue here and a lingering close up on Robert Redford as elves danced around the background with little signs on their hats that blinked “destiny” in multi-colored lights.

There’s none of that shit. The two men have a casual conversation or two, then they take to the skies, ignore the cameras and the director, and dogfight until both their planes are damaged beyond repair. Neither can possibly land and so they salute each other and fly off into the clouds of memory.

But the climax… the climax has already happened. You might have missed it. The dogfight finale is as exciting as a duel between unarmed planes can be, but it’s really just a long-held breath released. The real thrill comes the day before, when Waldo finds Kessler on a quiet bridge and they relive the original famous air battle—Kessler from his memory and Pepper from his dreams.

We who are about to fly salute you

They cherish this moment in time that shaped them, establishing that it was real. You can practically watch them hold it up to the light, examine it like appraisers, and then let it go again. The past is gone. Now is forever.

It is the most important scene in the film.

It encapsulates how The Great Waldo Pepper feels. We’re watching a cherished memory that’s constantly slipping farther away into the past. Everything is just beyond Waldo’s reach—sometimes literally, as in the case of Susan Sarandon’s character. Then, when he finally arrives at the opportunity of his life, he takes it, regardless of cost. He jumps without a parachute.

Melancholy, wistful, and yet somehow celebratory, The Great Waldo Pepper is not a film for everyone. It is of the air. Breathe it in and then let it go.

And as much as I like it, I must admit that it also doesn’t quite work—certainly not in the way that Butch Cassidy and the Sundance Kid works. You could easily watch the movie and then, years later, watch it again and not realize you’d seen it before. It contains all these wonderful elements, but they don’t congeal.