The moon. What is it doing up there? Where did it come from? Who lives inside it? How did they get there? Why aren’t we digging inside it this very minute to find out?***

These questions have plagued humankind since our first proto-human ancestor looked into the night skies and, seeing the full moon sneaking up over the horizon, said for all to hear, “Glargh oop borgle vep!” Or words to that effect. Humans ever since have tried in vain to grab it, throw rocks at it, lasso it, lean very tall ladders against it, or shoot themselves from cannons onto its surely rather nearby surface. And still the moon persisted in hanging in the sky, unreachable and unknowable, more or less begging to be poked in the eye with a sharp—and certainly very long—stick. 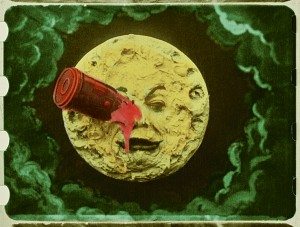 there’s something in your eye…

This is precisely what genius early movie-maker Georges Méliès did in what is considered the first ever science fiction film, Le Voyage dans la Lune (A Trip To The Moon), from 1902, the most famous image from which is a rocket stuck in the moon’s eye. Take that, you damn moon!

Méliès’s movie was inspired by two famous moon stories, Jules Verne’s 1865 novel From The Earth To The Moon, which ends with a ship being shot like a bullet into space (a sequel chronicles the travelers’ adventures reaching the moon’s orbit, and ends with two of them stranded on its surface), and H.G. Wells’s great novel from 1901, The First Men In The Moon, in which two explorers actually crawl into the moon and meet the Selenites living within. 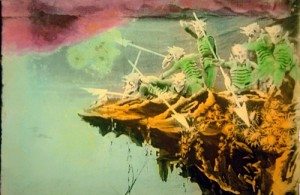 creepy moon creatures in A Trip to The Moon

Both books were made into their own movies, Verne’s in ’58, Wells’s in ’64. Neither is especially good. The best is the early film, a mere 15 minutes long, by Méliès. The effects might be weird and old, but they’re more magical by far than most of the CGI nightmares we’re force-fed today. The fully restored version even features the individually hand-colored frames of an original print discovered in a barn in Spain in the early ‘90s. Try watching the recently released blu-ray of it. Your mind will melt.

Next in moon lore is a movie I watched last night for the first time that inspired these lunar reflections, Fritz Lang’s silent Frau im Mond (Woman in The Moon) from ’29. It’s almost three hours long in its complete cut and man do you ever feel it. Metropolis this ain’t. Remember when those extra scenes from Metropolis thought forever lost were recently discovered, and new prints of the full-length version played? You saw that, right? Amazing. Metropolis burns up the screen. It’s not dull for a second. Woman In The Moon, made just two years later, could, through some judicious editing, lose 90 minutes and still drag here and there. And indeed many shorter cuts have circulated over the years.

Now as it happens, I have a thing for long, slow foreign films, so I’m glad to have seen the full version, but viewer beware. This one requires patience. The story begins with a Professor (Klaus Pohl) who years ago came up with a theory that there was gold in them thar moon hills. He was laughed into obscurity, old age, and penury. In the present (i.e. ’29), a young friend of his, Helius (Willy Fritsch), builds a rocket with plans to fulfill the old man’s dream. 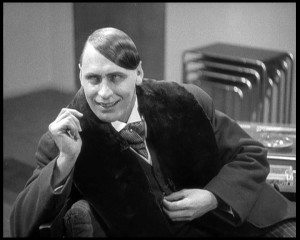 But alas! An evil consortium of businessmen led by a slick-haired master of disguises named Turner steals all of Helius’s plans and threatens to blow up his rocket if he doesn’t allow Turner to join him, that he may take possession of any gold. Helius has no choice. Turner joins the crew along with the Professor and Helius’s assistants, Windegger (Gustav Wangenheim) and the lovely Friede (Gerde Maurus), who’s engaged to Windegger. Helius is madly in love with Friede, but keeps this in check as much as any actor in a ‘20s era German Expressionist film can, which is not at all, of course, but everyone else is so busy chewing their own allotment of scenery that Helius’s mad love goes unnoticed. 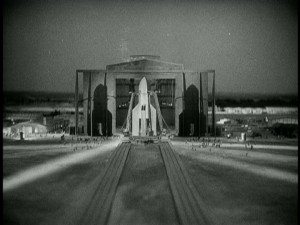 it’s only a model.

This set-up takes 90 minutes. Finally the rocket launches in a drawn-out sequence highlighting the clever model-based special effects, which on the whole are mightily impressive for their time, though not nearly as fantastic as those in Metropolis. The movie is also credited for inventing the “countdown” to launch later adopted by NASA and every other space program since. And going further into historical reverberations, some of the designers of the rocket in the movie went on to design Germany’s V-2 rockets, well known and much loathed for screaming across the skies in WWII. (For a mind-scrambling account of such goings on, and many more, read Pynchon’s Gravity’s Rainbow, assuming you have a few months to kill.) 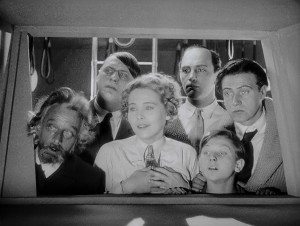 In short, they make it to the moon—along with a stowaway, a young boy and his collection of space-adventure comic books, the reading of which, he claims, has made him an expert on the moon—and land with a poof of moondust. 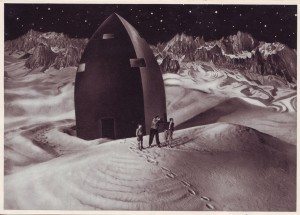 plenty of oxygen back in those days

Visually, the coolest part of the movie is the moon landing. They race over the surface of the moon, which rolls by as this sort of weirdly bright, lumpy, sparkly moonscape, the Earth setting in the background. It’s a bizarre and unique effect.

The moon has an atmosphere. They can breath. The Professor wanders off in search of water, a divining rod pulling him along (a divining rod?). The nefarious Turner follows the Prof’s tracks, leading him to a cave, the walls of which are bristling with gold. The Prof yanks off a chunk of gold almost as tall as he is and promptly falls into a crevasse to his death (I’m thinking there’s a lesson in this). Turner grabs handfuls of golden nuggets and returns to the rocketship. He tries to gain control of it. A gunfight ensues. Turner is killed. And a stray bullet punctures one of the ship’s oxygen tanks. There isn’t enough for the trip home. One person will have to stay behind. 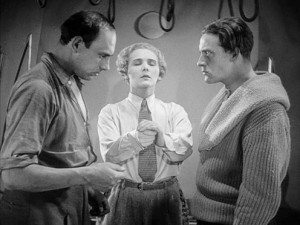 Helius and Windegger draw straws. Helius wins. But in a great act of selflessness, he drugs Windegger and Friede, and stays behind himself, telling the young boy how to launch the spaceship (you read that correctly). For after all, Friede and Windegger are in love.

The ship takes off leaving Helius behind—and there before him is Friede! She stayed behind for him! Suddenly this whole being doomed to live the rest of his life on the moon is looking up. Fade out, the end. 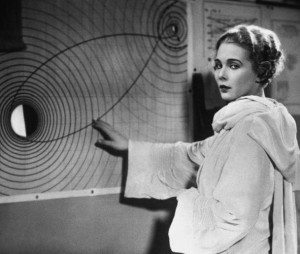 Missing from the movie, aside from brevity, are of course moon monsters. One can only hope that if Lang had made a sequel, it would have leaned more towards the Wells version and introduced some weird creatures to marvel at. 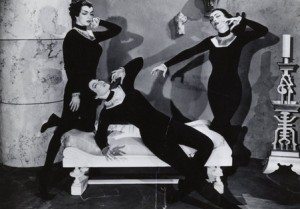 Later moon movies failed to expand much on the Méliès and Lang movies, with the exception of a movie you’ve no doubt watched many times, Cat Women On The Moon, from ’58, in which a moon mission discovers an ancient race of telepathic cat women living inside the moon in the last vestiges of its disappearing atmosphere. The cat women are able to telepathically influence the mind of the one woman on the mission, and use her to dupe the men. They plan to steal the ship and fly to Earth. Oh yeah, and also the cat women can teleport themselves all over their caves. I’m afraid I barely recall this one, so I can’t recommend it/warn you off of it. All I can say for sure is that I’ll be renting it soon. 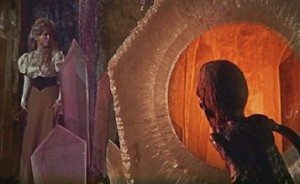 meeting a Selenite in the ’64 flick

As for the adaptation of Wells’s First Men In The Moon in ’64, it features special effects considerably lamer than Méliès’s. Plus it was made in an era of extremely bad sci-fi (with exceptions sneaking in here and there). Unbearably labored attempts at comedy and other affronts to cinematic decency were commonplace. The world had to wait until Kubrick’s 2001 in ’68 for science fiction films to be taken seriously.

In the realm of moon comedies we have Amazon Women On The Moon from ’87, a sort of sequel to The Kentucky Fried Movie, that featured as its centerpiece the titular sketch, which spoofed Cat Women On The Moon and other interplanetary adventures of the ’50s. It’s got some laughs. A moon-based movie with no laughs is the Eddie Murphy “comedy” The Adventures of Pluto Nash from 2002. I take no pride in being one of only 27 people on Earth ever to have sat through the whole thing. 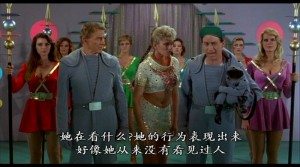 the Japanese (?) subtitles make it even funnier

The best recent moon movie is Duncan Jones’s Moon, from 2009, starring Sam Rockwell (and almost no one else save Kevin Spacey as the voice of the computer) as a guy working alone on a moonbase, to whom strange things occur. It was filmed on the still extant Alien sets, a little visual bonus for movie nerds, and is, as I vaguely recall, pretty good.

With all of that said, I’m thinking the best moon movie ever made remains the first, Méliès’s A Trip To The Moon. It took us to the moon and showed us its inhabitants with a panache as yet unmatched. If only some imaginative screenwriter would write a new moon movie that took us deep within it to reveal its many wonders… (which brings us to the asterisks you forgot about at the beginning of this thing…) 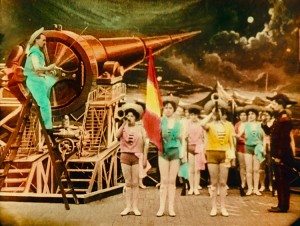 *** For all of the many famous and powerful agents/producers/etc. out there reading this, I’ve got a magnificent moon script improbably titled Clem And Cletus Go To The Moon that answers all moon-related questions. Contact me at supremebeing@standbyformindcontrol.com to check it out.