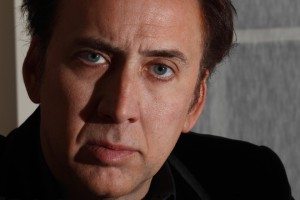 Knead for twenty minutes and then allow to rise

Have you seen Nic Cage’s face recently? I mean, really looked at it. The man looks like he’s been making out with a belt sander. Like he would need an extremely talented puppeteer like Craig Schwarz in order to successfully make an expression.

Luckily, in the newish Simon West film Stolen, there is no call for him to actually make an expression.

The Dr. Mrs. was flying home from New York this weekend and I was drunk, home, and waiting for her arrival. I didn’t want to watch something brain-stimulating (like Werner Herzog’s The Enigma of Kasper Hauser or Powell and Pressburger’s The Life and Death of Colonel Blimp, which Netflix had delivered on my request)—I wanted something explodey and stupid and full of what we euphemistically call ‘production value’.

I chose Stolen. It was not the worst film I have ever seen in my entire life, but it was the laziest.

I have no one but myself to blame. In my defense, I didn’t expect it to be good, but I did think that it might actually try, just a little, to rise above the level of a late-semester school lunch.

Simon West, if you don’t recognize the name, is responsible for such glamorous, clever films as The General’s Daughter, Lara Croft: Tomb Raider, and The Expendables 2. His best film, by a wide margin, is Con Air and I am not sure what that says about Hollywood, Simon West, or humanity in general. 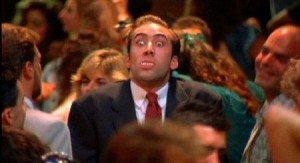 Blend in. Don’t be conspicuous. You look great.

Nic Cage, on the other hand, has made some intentionally and unintentionally magnificent films. As a younger man he threw down hard on films like Raising Arizona and Moonstruck. Even mid-career, his acting in Wild at Heart and Leaving Las Vegas is worth watching and enjoying. Then he slowly became a parody of himself, like Al Pacino and Jack Nicholson did—maybe he thought that’s what great actors in their latter years were supposed to do? Face/Off and The Bad Lieutenant: Port of Call — New Orleans harness this self-inflicted hysteria to excellent effect. Other, intentionally over the top performances, such as in Kick Ass, are also good fun.

Most everything else he’s stumbled through like someone who’s just stepped off a carnival ride covered in his own vomit. And that, too, is entertaining; I’m not proud—I like Nic Cage’s brand of incomprehensible warbling and his intoxicated action-hero stylings. 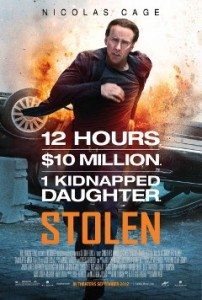 So yes, I pressed play on Stolen of my own volition. Egads, I say. Egads.

This was a film in which every single scene happened exactly as the Hollywood rulebook suggests it should in its sample diagrams. It was as if—and I’m being serious—they had taken the least impressive action/thrillers made over the past twenty years, cut them into scenes, threw those scenes into the air, and then just taped the first forty they grabbed back together and hoped for the best.

For fun, why don’t you now guess exactly what the film is about and what happens in it based solely on its one word title.

Hey! You’re right! How did you know that reformed criminal Nic Cage saved his kidnapped daughter from his incomprehensibly psychotic former partner (Josh Lucas) at the last possible second? What? Yes! Cage DID then impale the somehow animate corpse of his psycho partner with a crowbar, even though his character (Will) had been gut-shot and incinerated and half-drowned. During Mardi Gras. 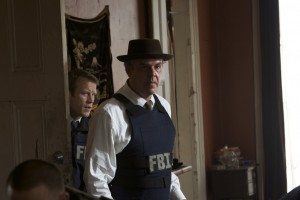 Get out of my way. I have an important hat.

But I’m getting ahead of myself. I haven’t even mentioned Danny Huston’s implacable federal officer whose entire character is communicated via a stupid hat. Or Malin Akerman’s getaway driver/bartender who returns to the dark side to help Will pull off one last score to save his pre-teen daughter. Or M.C. Gainey’s sexist pig alarm cracker who exists in the film solely to refer to female sexual organs as ‘moose knuckles.’

That’s how we know he’s bad, see? Because he said moose knuckles instead of vagina during a bank robbery. Which is funny you know, because it’s hard to rob a bank without discussing vaginas. You try it. 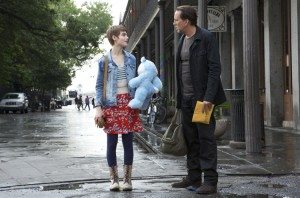 Its funny, I’d swear I’d been in this exact same scene in another Simon West film…

This is a film that takes any and every shortcut it can, running over its own feet on countless occasions. How do we know that Cage’s Will, just out of prison, is missing his estranged daughter? Yes. that’s right. He buys her a teddy bear. At the bus station.

You know what? I’m tired. Writing about this movie is exhausting. There’s nothing to hold on to. It’s like trying to describe the process of waiting for the bus once you’re already at the bus stop. There was nothing, in any way, that made Stolen stand out from its peers in the slightest. You could probably screen Stolen directly over another film and no one would even notice it was playing. 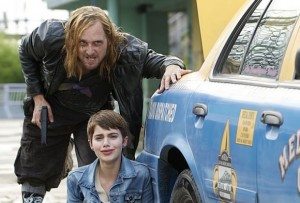 What? I’m the bad guy? How can you tell?

The only thing that is remarkable about this film at all is how universally shitty it is. Not cheap. Not amateurish. Just insufferably bland and shitty. The action sequences are boring. The drama is thinner than Donald Trump’s chances of being president. The script I’m fairly sure wasn’t written at all. I think David Guggenheim came up with a pitch by reading the back of old VHS tapes and then he just let his ferret sleep on the keyboard.

Did I mention what Josh Lucas’ bad guy partner was responsible for taking care of during the opening bank robbery gone bad? I think he carried some bags. Also, once, he sprayed some lubricant into the hole Nic Cage was drilling into the safe. Otherwise, he just talked. A lot.

This post needs a conclusion. So here it is.

4 responses on “Nic Cage’s Stolen: The Laziest Film of All Time”