Images from Godfrey Reggio’s 1983 film Koyaanisqatsi are etched into my brain. Nighttime cityscapes at high speed, their streets like veins carrying electrons. Rivers of fog roiling over mountains. A black cloud engulfing a crane. A pilot standing before his jet, his eyes unblinking. An exploded rocket’s flaming engine falling to earth, spinning, smoking, a container of ashes in the shape of a chalice thrown from the sky. And many more. All of them, really. Is there any image in Koyaanisqatsi that isn’t memorable? 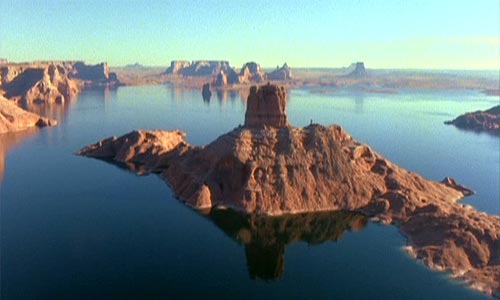 Godfrey Reggio, director and conceiver of Koyaanisqatsi, spent years with his collaborators fashioning this strange and unique movie. It is a movie without characters, without dialogue or narration, without plot. It is a movie where what we’re used to seeing as background is foreground, an idea that was the basis for the movie’s conception. Reggio says:

I was trying to look at buildings, masses of people, transportation, industrialization as entities in and of themselves…Same thing with nature: rather than seeing nature as something dead, something inorganic, like a stone, I wanted to see it as having its own life-form, unanthropomorphized, unrelated to human beings, here for billions of years before human beings arrived on the planet…I was trying to show in nature the presence of a life-form, an entity, a beingness, and in the synthetic world, the presence of a different entity, a consuming and inhuman entity.

It’s hard not to watch the movie and come away agreeing with the title, a Hopi word the translation for which comes at the end: Crazy life. Life in turmoil. Life disintegrating. Life out of balance. A state of life that calls for another way of living. Yet the movie is far from a screed against technology. I’ve read critics who smugly point out that without technology the movie wouldn’t have been made, that movies are technology. This fact is hardly lost on Reggio. Not only is it a work of technology, but almost every image in the movie is manipulated, either sped up or slowed down. Clouds and fog roll like rivers, shadows race across cliffs, ocean waves rear up so slowly you can see every droplet of water crystalline against the sky. Cars zip along highways, dynamited buildings sink balletically to the ground, masses of people race up escalators. The beauty of both cities and the natural world are rendered with the same methods. They are linked through the medium of film. 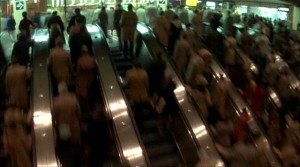 So it’s no accident the scenes of cities are as beautiful as the scenes of nature. The film’s depth and ambiguity stem from this linking. Roger Ebert, in a typically myopic review, is unable to process what this could mean. “There is no overt message except the obvious one (The Grand Canyon is prettier than Manhattan),” he proclaims. It never occurs to him–and others making similar criticisms–that his assumption of what the movie is supposed to mean is wrong. For him it is the filmmaker who has erred in screwing up his “simplistic…knee-jerk environmentalism” by accidentally making the man-made environments as beautiful as the natural ones. 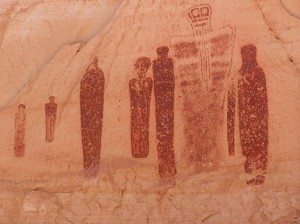 the only Hopi on view

Not surprisingly to anyone paying atttention, Reggio is not interested in simplistic messages. In bringing the background of our lives—and our movies—to the foregound, Reggio set out to render the synthetic environments as beautiful as the natural ones. He originally envisioned the film as having no name, so that no words at all would be associated with it. He changed his mind not to suggest that the Hopi Indian lifestyle is a preferred method of living, but to provide an outsider’s perspective on the world we’ve created. There are no Indians in the movie. Their way of living is not under consideration. Reggio isn’t contrasting so-called noble savages with modern man. He’s examining environments. One, the natural world, the other, the synthetic world we’ve layered over it. He’s asking us to step back from our creation and think about it. The movie isn’t making an argument and it isn’t providing an answer. It asks us to think about what we’ve made, to see it through the eyes of another culture from another time, a culture who would likely find our way of living insane. It’s as though he’s allowed this distant culture to use our technology to show us the world–both natural and synthetic–in a way we’d never thought to see it. 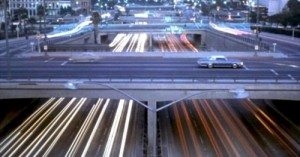 Is our world insane? Is it unnatural? Sped up cars racing along nighttime highways look like blood flowing through veins. Microchips look like cities look like landscapes. I watch this movie and I see in everything we create a mirroring of both the outside world and the insides of our bodies. What else could we be expected to create? 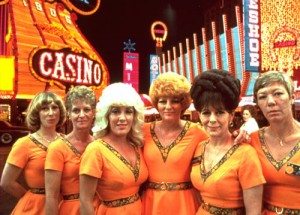 There are people in Koyaanisqatsi. They too make up the background to our lives. We see them as faceless masses racing past us, standing still for lingering portraits, or in slow motion passing us by, at times turning to look at us—at the camera—and responding with a smile or a scowl. Then there’s that shot of the pilot before his jet. Slowly we move in, closer and closer. I find it hard to see how this shot could be acting on the side of a simplistic “technology is bad” argument. The pilot is not part of any argument. He is a part of our world. 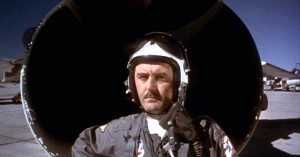 look into my eyes

Another long, long shot is of an airplane on a runway coming slowly toward the camera, warbling in the heat. It’s reminiscent of the opening scene of Werner Herzog’s Fata Morgana (’71), where airplanes land on a runway, one after the other, until you become hypnotized by the repeating images. Where could this fall in any argument? 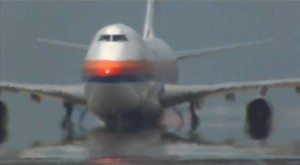 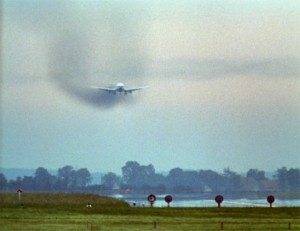 Koyaanisqatsi isn’t just a juxtaposition of naturalistic and synthetic images. It tells a story. Not a story as we typically think of stories, because there are no characters to follow, no one pursuing any goals, no action. Yet it’s told with a distinct beginning, middle, and end. It’s as carefully structured as any narrative feature. You couldn’t rearrange the shots in Koyaanisqatsi without destroying it. It tells a story in the way a symphony tells a story. It is a kind of symphony. Music in Koyaanisqatsi isn’t used as background to the images. It’s intertwined with the images, not commenting on them but acting in concert with them. So to speak. The music becomes the images and the images become the music. Reggio:

I was looking for music that didn’t illustrate what I was showing on the screen. I was looking for music that itself had a voice that could perceive—in tandem with the image but not in place of the image…Western music is very emotionally dramatic to the point of bringing such emphasis that it tells you what to look and what to feel, and I didn’t find that in Philip Glass’s music…his music has a presence that was ever ascending and never arriving. It was music as a journey…

Reggio’s production team wanted him to use the music of famous classical composers. Vivaldi, or Beethoven, etc. Reggio didn’t like this idea. He didn’t want music that was already viewed as beautiful. He wanted original music. Nobody thought Philip Glass was a good choice. Glass didn’t think so either. He’d never scored a movie and wasn’t interested until Reggio showed him a reel of unedited footage, twice, the first time with classical music, the second with one of Glass’s pieces. After which Glass said simply, “When do we start?” 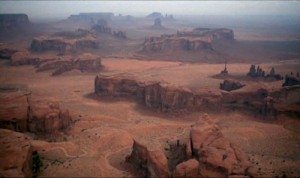 Glass composed music to the movie, and the movie was edited (and shot) to the music, with different sections going back and forth between Reggio and Glass, slowly evolving over three years, the images and music ultimately blending together into one inseperable thing. To use a technical term. Says Glass, “In a sense you could say the text…although the text never appears…the text, the image, and the music become very organically intertwined.” 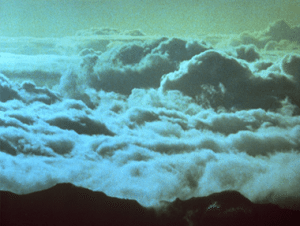 Ron Fricke shot the movie. His cinematography is as remarkable as the score. When the movie was first shown, no one had seen anything quite like it. Since then, the kind of time-lapse techniques he pioneered have turned up everywhere. Fricke didn’t stick with Reggio for his two sequels, Powaqqatsi and Naqoyqatsi, instead making two of his own films, Baraka and Samsara, neither of which I find to be nearly as powerful as Koyaanisqatsi. Fricke’s two films don’t have the kind of propulsive structure that Koyaanisqatsi does, and in neither movie does the music do anything but provide innocuous background sounds. Of course they’re still unbelieveably gorgeous visually. 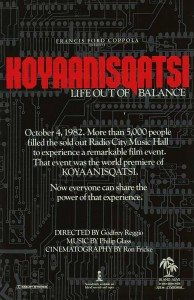 Glass never thought Koyaanisqatsi would be anything but an art project. Once finished, he and Reggio screened it for Francis Ford Coppola, who according to Glass left the screening with only one word, after shaking both of their hands: “Congratulations.” Coppola was broke at the time, but offered to let them use his name to “present” the movie, which they did, leading to it showing at the New York Film Festival. People loved it.

Koyaanisqatsi has become a kind of classic. It’s done so in spite of critics like Ebert who call it simplistic. Because it isn’t simplistic. It isn’t sending a “message” or telling you what to think. It shows us our own world in a way we haven’t looked at it before. When I watch Koyaanisqatsi (and I’ve watched it countless times since 1983, when I was 12, and said to my dad, “Hey, there’s some weird movie at the Bijou, let’s go”), I don’t come away saying, “Nature good! Man bad! Give me rock and stick! I make fire now!” No. I come away thinking about what happens when we as a society—as a species—act without reflecting on what it is we’re doing, what we’ve done, and what kind of future we hope to inhabit. Koyaanisqatsi is telling us to slow down and pay attention. Yes, something is wrong. Reggio is saying that much. He wouldn’t have made the movie otherwise. Something is out of balance. But what, exactly? And how would we go about building our world differently? Koyaanisqatsi has no answer for that. It exists only to ask the question. 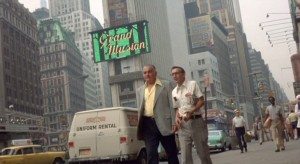 is this all it is?

(And for all of you Bay Area residents, Philip Glass and his ensemble are coming to Davies Symphony Hall to perform the score live to a screening of the movie on May 26. I’ll be there….)

4 responses on “On Koyaanisqatsi, Beauty, And Ambiguity”