Honestly, we only have ourselves to blame. People talk about the decline of Western civilization and here is the proof. 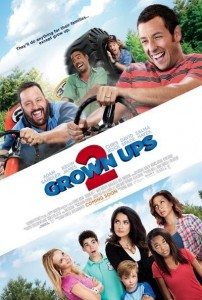 I’m sure this sequel will bring the first film’s witty testicular injury gag to a satisfying conclusion. 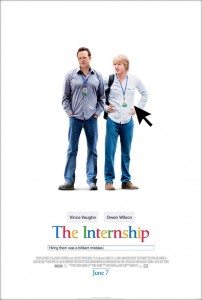 I hear there’s footage of the guys who wrote this script trying to seduce a whale carcass.

Nothing, absolutely nothing, could be worse than these two films. They are the cinematic equivalent of that awful pink stuff they make you drink a gallon of before your endoscopy. Chalky, vile, endless swallows of sludge that only needs to stay down long enough for technicians to see what’s wrong with you.

Then, afterwards, god have mercy on the janitorial staff.

It’s not that I’ve seen these films yet. I haven’t even watched these trailers. I don’t want you to watch the trailers either.

And, yes, I realize it is morally suspect to review films one has not seen. But for the love of all that is holy and puppies and freckles and goddamned sunshine—one doesn’t need to take a big whiff of fetid blue hairy mystery back-of-fridge Tupperware contents to know THAT IS NOT FOOD.

This, my friends, is not food. 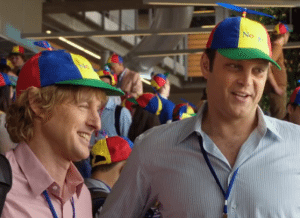 You know what would be really hysterical? Watching Vince Vaughn try to do any sort of job at Google.

The idea that enough people went to see Grown Ups to make a sequel financially prudent leaves me looking for a nice hot glass of lead to drink. The fact that working for Google is now the COMEDY PREMISE of a film starring Vince Vaughn may actually be proof the devil exists. See, it’s funny? You could study hard, and go to college, and learn about computers or design, and get a high-paying, difficult, pressurized job or, I suppose, you could go see The Internship while eating an entire coconut cream pie with your hands.

It’s like… it’s like… wait. It’s like making a comedy in which Benny Hill gets a job at Bletchley Park during WWII so he can accidentally crack the Enigma code with his butt. And if there’s any confusion there, I’m saying Vince Vaughn is comparable to Benny Hill in terms of neither of them is fucking funny in the slightest. 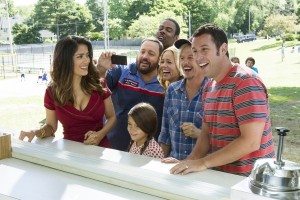 Looking at this picture would suggest there are at least two reasons to watch this film, but it ain’t so. Those pigtails are digitally enhanced.

Grown Ups 2 brings us to an entire other level of hell. Adam Sandler, David Spade, and Kevin James limping through yet another totally uncooked comedy isn’t even news, but this one brings in Chris Rock, and he has actually been funny at points in his life. How much money could they have offered him? Oh. What? He was in the first one, too? Jesus.

If you can watch this movie and tell the touching moments from the scrotal injuries, you’re probably on exactly the right combination of hallucinogenics, hot mustard, and whatever the hell it was that killed Michael Jackson.

But, for your sake, for our sake, I hope you don’t see either of these films. Unless you’re MC Frontalot and want to accept a live-Tweet challenge.

5 responses on “The Internship & Grown Ups 2: Go Fuck Yourself”