Everything about the sequence is uniquely unsettling, starting with the first shot, the island, which seems to hover in the center of the screen. It takes you a moment to understand what it is you’re looking at. An island? And what’s it doing? Are you moving toward it, or is it moving toward you? And the music, simple, disturbing synth by Wendy Carlos, along with the strange howling voices of unseen—people? Demons? 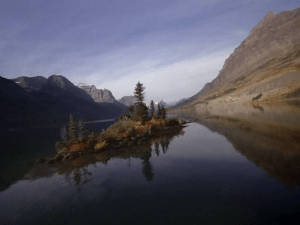 The camera glides past the island, tilts over and back again, and we cut to an overhead shot of a tiny yellow Beetle wending its way upwards through the trees. This shot and the sequence as a whole mirrors the hedge maze at the end of the movie, and for that matter the Overlook hotel itself. The movie is a series of winding roads, branching hallways, and snowy paths in which the characters become trapped and lost. The gliding camera of the opening matches the gliding Steadicam used throughout the movie. 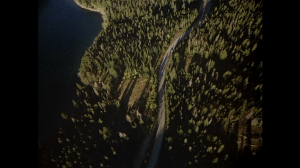 In the next shot we race ever forward, snowy mountains looming in the distance, the car a lonely speck in the wilderness. Then the most unsettling shot of all begins as we swoop down towards the Beetle against a sheer cliff on one side, icy blue water on the other, and suddenly the massive bright blue credits begin to scroll upwards over the image, which is a very strange thing for opening credits to do. 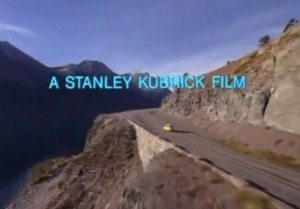 End credits scroll. Opening credits, never (okay, almost never). The effect of the scrolling credits makes the sequence more unsettling still, with the camera speeding in one direction, the credits in another, and now the car turning away to the right as we fly over the embankment, and there’s no way you can watch this, no matter how many times you’ve seen it before, without for a moment thinking oh shit no wait!

But it’s okay. You’re flying. The weird voices mix up. Back to the overhead image of the car through the trees. We later learn it’s Jack Torrance alone in the car. It’s Jack who’s threading his way ever upwards into his own nightmare, into his own mind. 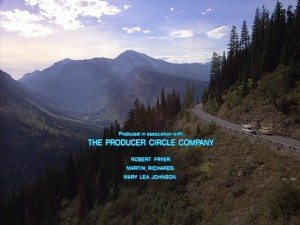 There was a time, believe it or not, when lens flare was considered a “mistake.” Here it’s beautiful and kind of scary as the camera tilts up to the sun and away again, and we cut to the car clinging to a green mountainside. To me these mountains could not look lonelier or scarier. It’s like Jack’s driving up to Mount Doom, only the mountains he’s in here are more ominous than anything in The Lord of The Rings. There’s something weirdly ethereal about them. But in a bad way.

Finally he’s in the snow, almost to the top, and as the last credit rolls up and away, we meet the Overlook Hotel and the snowy mountain above it. And in the first instance suggesting that what is seen in The Shining depends on which character is seeing it, there’s no hedge maze in sight. 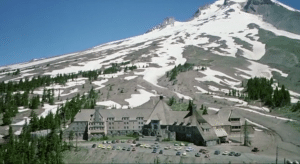 It’s a very simple opening. Eight shots, two minutes forty-seven seconds. Blue scrolling credits. Eerie music. Yet it manages to sum up the entire movie: the loneliness, the fear, the journey through winding passages into the unknown, and the unique gliding style with which the whole movie is shot. You could ask nothing more of an opening credits sequence.

Yes, fine, there are other brilliant examples. Which I hope you will tell me all about in the comments when you argue for their superiority.

For a nice big version of The Shining’s opening, check it out over at Art of The Title, and while you’re there, take a look at their fine selection of other great title sequences.

4 responses on “The Best Opening Credits Sequence of All Time”