Far be it from me to take issue with the Supreme Being, but after reading his otherwise infallible dissection of the stunningly overrated career of Señor Spielbergo, I must take umbrage with one point, and that is his somewhat cavalier dismissal of the creative merits of E.T.

Now, as the Supreme Being has already stated, he is a vengeful god whose youthful tastes veered closer to children-consuming conifers than to homesick aliens with a soft spot for cheap candy. And the Supreme Being is unquestionably correct regarding Mr. Spielberg’s film credits. With a few notable exceptions, the guy doesn’t make good movies. He makes memorable sequences. 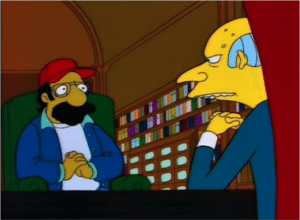 Unfortunately, those sequences are usually surrounded by the cinematic equivalent of a stool sample.

But I think it’s unfair to lump E.T. into this dubious category. E.T. is not only a legitimately good movie, but it’s a pretty brave one, too.

Look, it’s fair to say that E.T. was kinda popular. Until Spielberg surpassed his own film by feeding Wayne Knight to dinosaurs, E.T. was the number one moneymaker of all time, grossing $619 million world wide. And that’s 1982 dollars, which today is like eleventy gagillion.

Hershey’s profits rose 65% because kids started shoving Reese’s Pieces into their pie holes (not a joke). Neil Diamond was so moved he recorded a song about the wrinkled little guy (and we all suffered for it). The movie also inspired an entire genre of wanna-be knock offs (and boy did we all suffer for it). 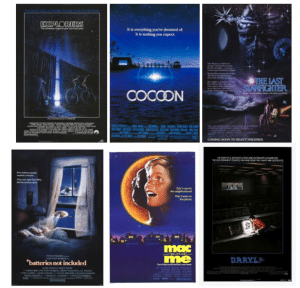 But, you have to keep in mind that all of this happened AFTER the movie came out. There were no stars in it. And when I say “no stars” I mean NO. STARS. None. Hell, we don’t even see Peter Coyote’s face for most of the movie. And Dee Wallace? I’m sure she’s a nice lady, but there weren’t any execs in Hollywood jumping up and down yelling “GET ME DEE WALLACE!”

But even more than the lack of stars, the tone of the movie was radically different from the other movies being made at the time. You gotta remember, this was the ‘80s. You know… Reagan Country. ‘Merica.

Most of you probably don’t remember that time, because you were born during it. Or maybe after. (And if that latter is true, do me a favor and punch yourself in the face. Hard. Do it for an old man).

But trust me. It was a scary time. It was all guns and steroids and neon and Pia Zadora. The movies being made were macho, edgy, bloody fare like First Blood, Firefox, and Conan. 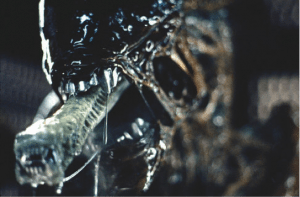 Got any Reese’s Pieces?

E.T. was the polar opposite of that. It was a sweet story about a lonely boy who finds a lost alien. No eating people. No flame throwers. No acid blood. People forget, but the little guy was a botanist for crying out loud.

We don’t see much of E.T.’s technology. Or even glimpse his home planet. He doesn’t use laser guns or command a Death Star. At its core, E.T. is a fable about a lost soul who just wants to go home. It’s a brilliantly simple story that any child can relate to.

And in a film world dominated by Sly and Arnie, making a movie like E.T. was a huge risk. In fact, Spielberg had to cash in all of his industry capital to get the damn thing made. I mean, can you imagine pitching THAT movie to a studio exec?

Well, there really isn’t one.

A boy on a flying bicycle.

“What about the love story?”

A boy and a talking potato from another planet.

“Stevie… You’re killing me here. You got a truck chase, right? Tell me you’ve got a fucking car chase.”

Well, there IS a chase. But it’s on bikes.

“Oh, thank Christ. Motorcycle chases are fine. Is it like The Great Escape?”

No. It’s with bicycles.

With children. Through a tract home neighborhood.

I wouldn’t fuck with you. I want to make this movie.

“With kids on fucking bicycles?”

Well, there’s an alien in the bicycle chase.

“Why the hell didn’t you say so? Is he chasing them? Spitting venom from his retractable jaws?”

No. He’s sitting in the apple box strapped to the handlebars.

“Steven… listen, man. You know I love you. And I want to do this. But honestly, I have to ask, with all due respect… WHERE ARE THE MELTING FUCKING NAZIS? WHERE ARE THE GUYS BEING BITTEN IN HALF BY SHARKS??? THE SCARY ALIENS COMING DOWN FUCKING CHIMNEYS???”

I got a flower that comes back to life. 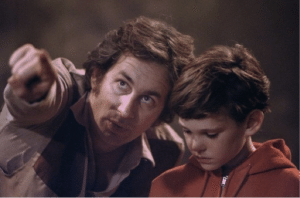 Trust me, there’s money right over there…

So, yes. We can now agree that it was risky making E.T., but how is the movie itself?

E.T. is a sweet, thoughtful movie about that painful, scary transitional moment every child endures when they take that first step into adulthood.

It’s always reminded me of the last story in The House at Pooh Corner, where Christopher Robin tells Pooh Bear he must leave the Hundred Acre Woods forever. You see, Christopher realizes his childhood is ending. It’s time to go on to adulthood. You know… misery.

He’ll remember his silly old bear forever. But he must now go and never come back.

E.T. endeavors to do the same thing in a beautifully written script by Melissa Mathison. Her words are often overshadowed by Spielberg’s dazzling visuals, but her writing is the true, unsung hero of this quietly epic masterpiece. And it all comes to an elegant, soul crushing conclusion once the alien ship returns to retrieve its lost companion. 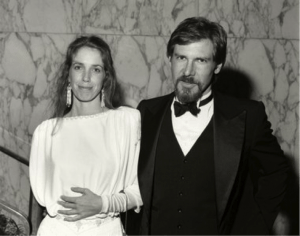 Elliott and E.T. are standing at the landing platform, having risked all to make it to the magical little clearing in their own Hundred Acre Woods. E.T. motions to the ship and says to Elliott, “Come.”

What elegant writing. Two perfect words, partnered by two perfect performances. One given by the stunningly good Henry Thomas. The other by a rubber and plastic model, designed by the late, great Carlo Rambaldi.

E.T. then takes that iconic glowing finger and touches it to the side of Elliott’s head. The music drops out and he says “I’ll be right here.”

Shit… I’m getting choked up right now just writing this.

Spielberg was, in many ways, at the top of his game here. He chose unknown actors expertly. He shepherded the air tight script by Mathison. And holy cow did John Williams knock it out of the park with an admittedly heavy-handed yet gorgeous soundtrack. Even Lucas’ ILM pitched in with jaw dropping effects that still stand the test of time.

The characters are fully realized. No one-dimensional baddies here. Even Peter Coyote’s ominous government agent ends up having a soft heart. And dreams. And what do you know? He gets to live them out, too. 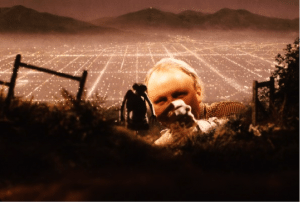 I can still see you, Dennis…

So everybody wins! How nice is that?

Is E.T. “cool?” Maybe not. But it’s a perfect fairy tale. It’s sincere. It’s well thought out. It doesn’t have traditional “bad guys” or the obligatory fight scene. Even the car chase is a whimsical twist on the traditional Hollywood cliché — cars pursuing children on bicycles.

Seen through the current, annoyingly sarcastic hipster culture, the film may come off as overly sweet and sentimental, but that’s a good thing. Screw hipsters and their too-cool-for-school attitude. We could do with some unapologetic, sincere, sweet family fare these days. 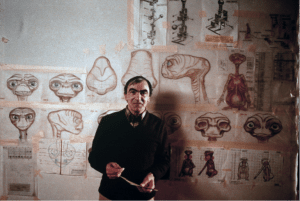 Carlo is such a badass

And yes, the legacy of E.T. isn’t helped by the abysmal track record that followed. All of the styles and choices Spielberg used in E.T. to great effect were later bastardized into something hollow and soulless. Manipulative. And, frankly, gross.

But E.T. is a great, honest, and surprisingly personal film that feels real. It’s what it was like to be a young suburban kid back in the ’80s — down to the Star Wars action figures.

And it’s a great movie to boot.

God Made Slugs has known the Supreme Being and the Evil Genius… oh, since before you were born. They’ve worked together. And they’ve done other things together that should probably not be discussed in front of law enforcement personnel. When he’s not bemoaning the state of cinema, God Made Slugs can be found reading old comic books and staring at his action figures, willing them to life. He also puts words in the mouths of actors on that box that sits in your living room.