It’s not often a remake is any good, but there are exceptions. Watching this trailer for the upcoming Japanese remake of Unforgiven (’92), one can’t help but think of Leone’s Clint Eastwood starring remake of Kurosawa’s Yojimbo, A Fistful of Dollars. This time it’s in reverse. The Eastwood movie is being remade by a Japanese director, Sang-il Lee.

It’s almost better to watch the version of the trailer without subtitles. If you know the original—and you do—you’ll know exactly what’s going on. But in the interest of checking out the new dialogue in familiar scenes, here it is with the English translation:

Usually when a movie is remade, it’s remade drastically. At least drastically enough that one can rant and rage about how the core beauty of the original was taken out and beaten to death with a tire iron, and why, if you’re going to take out what was best about the original, remake the damn thing in the first place? Zack Snyder’s brain-dead remake of Romero’s Dawn of The Dead comes immediately to mind. Or how about the Keanu Reeves version of The Day The Earth Stood Still? One sheds a tear at the mere memory of its existence.

So it’s unusual that this Unforgiven remake, while the dialogue appears to have been heavily altered, looks like it follows David Webb Peoples’s script scene for scene. Is this a good thing? In the case of Unforgiven, yes. I’ve actually long thought, in my blasphemous way, that it’d be a perfect movie to remake.

Let’s see if I can unpack why.

Unforgiven is the best movie Clint Eastwood ever directed. Better than The Outlaw Josey Wales, better than…(pause while I scan IMDB)…okay, so there’s not much competition, but the point is, Unforgiven is a great movie. I loved it when it came out, I loved it on every subsequent viewing, and after not watching it for maybe a decade, I loved it the other night when I watched the blu-ray of it. It’s one of the most quotable movies ever made. The script is pure dynamite. Famously, Eastwood bought it from David Webb Peoples and then sat on it for a decade until he was old enough to play the part. Then he shot the thing page for page, word for word. An unheard of thing to do. It’s full of great performances. It’s by now a classic western.

So why remake it? 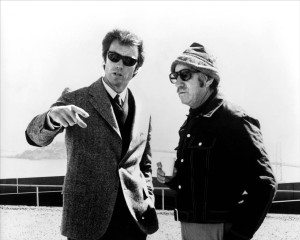 The thing is, as my IMDB perusal above reminds us, Eastwood has never been a great director. He’s not bad. Sometimes he’s perfectly good. Don Siegel was his inspiration and mentor (Siegel directed Eastwood in The Beguiled and Dirty Harry, among others). He taught Eastwood the style of having no style, of adapting one’s methods to the script at hand, and shooting it in as simple and unostentatious a manner as possible, a perfectly reasonable way to direct pictures, and one Siegel pulled off with, I’m afraid, far more panache than Eastwood ever has.

In the case of Unforgiven, Eastwood’s direction is just fine. It gets the job done. It’s not showy. Some scenes are suitably atmospheric. Others are lit blandly. The look is very much of its era. You know you’re in the ‘90s right away, something about the colors and the lighting. It’s edited well enough, yet the only real sense of flow to the picture comes from its genius script.

Which is what this all comes down to. The script is better than the movie. What Eastwood managed to do was to stay out of his own way, shoot the thing as written, and move on. The result is a great movie. Likewise, when he shoots the many average-to-awful scripts he typically chooses, the resulting movies are average-to-awful.

Unforgiven is missing something, something a great director could have given it. It’s missing a sense of itself, a sense that it understands its own deeper meanings, its mythological elements. Which are exactly the kinds of things Eastwood studiously ignores. His interest is in the character, the old killer, wise and weary, taking revenge one last time. Which is great stuff. It’s just that the story goes so much deeper. 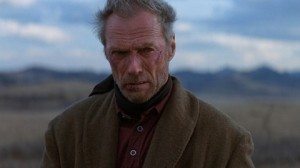 Munny gets mad (at me, for writing this)

Eastwood’s character, William Munny, is a retired killer, a monster, a harbinger of doom. He brings death wherever he goes. He’s introduced slogging around in the mud with a styful of hogs. He’s a demon. He doesn’t care that the story of what the two cowboys did to the whores was a lie. He’s going to kill them anyway, because that’s what he was hired to do. It’s enough that he’s being paid. In the process he causes the death of his best and oldest friend and turns the Kid into a murderer. He rains death down on an entire town. He goes against everything he claims he’s become and reverts to being a monster, and then? When it’s all over? We get a crawl telling us he moved away and lived a mildly successful life as a businessman. Well, isn’t that nice for him? We root for him in this movie, but he’s evil personified. All of this is in the script, so it’s there in the movie, but it’s as though Eastwood isn’t quite aware of it. He doesn’t use the subtext at all.

Which, granted, doing so can be a terrible idea. Overly stylistic directors might whack you in the face with subtext, and there’s nothing worse than that. The point is not that Unforgiven is bad–I love it!–it’s that there’s more inside of it than it knows. The script is so resonant that a different take on it, without changing a word, could elicit a much different, much darker, much more mythical movie.

The biggest hurdle in remaking Unforgiven would be the cast. His direction aside, Eastwood embodies the character perfectly. And no one could top Gene Hackman as the miserable bastard sheriff, Little Bill. 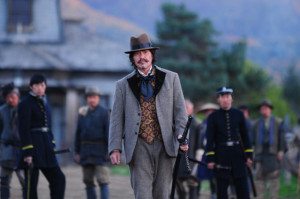 So for that reason alone, a Japanese remake, set in a different country with unknown actors (to Americans, anyway, and with the exception of leading man Ken Watanabe), may be the best way to erase memories of the earlier version and allow the story to be seen anew.

On the minus side, it looks like much of Peoples’s dialogue has been changed, which can hardly be for the better. The lines in the trailer are admittedly a bit worrisome in their bluntness with regards theme.

But so it goes. It’s a hell of a thing, remaking a famous movie. In this case, I remain cautiously optimistic.

6 responses on “Coming Soon: A Remake of Unforgiven”