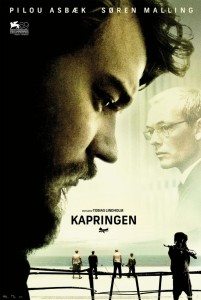 The new Danish film, A Hijacking (Kapringen), which I watched last night, seems like the mirror image of the upcoming Paul Greengrass / Tom Hanks film Captain Phillips. In the expensive Hollywood version (I surmise from the advertising), a hero captain rallies his rough and tumble crew to survive a modern piracy situation on the high seas. Then the U.S. military gets involved for enough action sequences to satisfy a modern audience situation.

A Hijacking isn’t like that at all. It’s lonely and slow and affecting.

In the film, a cargo ship is taken by pirates, but the siege happens off screen. The military isn’t called and doesn’t care. Instead, hope of rescue—of a sort—is dangled by the CEO of the shipping company who negotiates with the pirates via intermediaries on both ends. Half the film follows the misery and tedium of prolonged incarceration onboard the ship. The other half gathers around a spotty conference call connection as men in suits try, over a period of months, to pick a dollar amount that will secure the release of the seven despondent crew members.

All this brings a level of reality to maritime hijacking that most of us—me included—never really bothered to visualize. For that, I appreciated and enjoyed Kapringen. 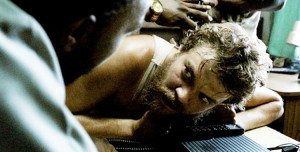 Ship’s cook Mikkel (Johan Philip Asbæk) is the story’s eyes and ears and he’s no hero. All he does is endure. Back in Denmark, CEO Peter Ludvigsen (Søren Malling) throws his negotiating skills into the crucible and hopes they burn pure. They do and they don’t, and that reads as honest. Save for an unnecessarily melodramatic note at the end, there are no villains, no bravery, and no lessons.

There are times when A Hijacking appears to request your concern for one group of characters or another. Sometimes that’s easy to give, as in when Mikkel fears for his life. Sometimes that’s harder, as when Peter feels the pressure of saving lives and millions of dollars. Other times, it’s almost surreal; like when the pirates’ translator insists he’s not a pirate, just a hired hand.

How does one get that job, I wonder? 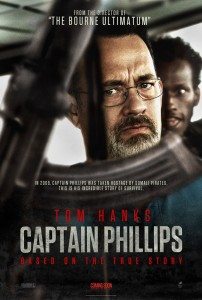 Better ask Paul Greengrass and Tom Hanks. In the trailer for their hijacking film, the East African pirates (Somali, I’d assume) sneer with villainous threat. After watching A Hijacking, that almost seems comical. It isn’t, though. While I’m sure the Hollywood version will have more intense action, better (or any) special effects, and more elegant camera work, those are all things that real life lacks. Not that I couldn’t use a little CGI now and again.

What I’m trying to say is that here is a crack in seemingly impenetrable hide of Hollywood. Yes. Those louts have a lock on giant fighting robots and Ben Affleck as Batman (and I mean, c’mon. Really?), but they wouldn’t recognize reality if it puked through their sunroof. And that’s what it’s doing right now. Fantasy is fun, but escapism loses its appeal after the fifth film in a row. 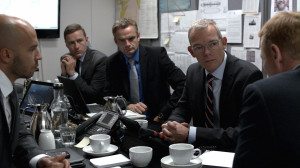 So check out A Hijacking instead. It’s something else.

It may not be a stunningly brilliant film. The plot isn’t a revelation. The look is full of that familiar old irritating camera shake that no longer reminds us of cinema vertité. The acting—I don’t want to shock you—is almost all in Danish. What it will expose you to, however, is real and primarily honest and eye-opening. You’ll come away understanding something you didn’t already.

Such as how easy it is to wrest away control of the ship, no matter how big it may seem from just above the waves.