I never saw Mary Poppins as a kid. Yep, this Oscar-winning, smash-hit, family favorite completely passed me by. So, with Disney’s Saving Mr. Banks due in December — a film about the making of Mary Poppins — I thought I ought to stick my head into that magical carpetbag and see what’s what. 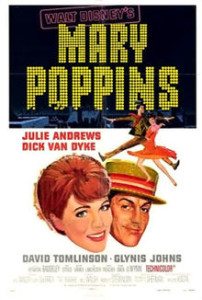 I intended to watch the film with my nieces, who range in ages from ‘i made up my own joke’ to ‘advanced eye roll’. That didn’t happen, though. The girls wouldn’t watch Mary Poppins with me. They’d seen the Broadway show and weren’t interested, despite my pleading. Instead, over the long weekend, they screened My Cousin Vinny, The Chronicles of Narnia, half of The Iron Lady, and Clueless. Times change, I guess.

I ended up watching Mary Poppins with the Dr/Mrs and Moms.

Now that I’ve seen this Disney classic, I can tell you that — without the benefit of nostalgia or literal immaturity — it’s awfully peculiar. Supercalifragilisticexpialadociously strange, in fact.

It’s not that I disliked Mary Poppins. In fact, there’s quite a bit to enjoy in this bizarre story. It’s more that while Mary Poppins may be a film that can mesmerize young minds, it’s hard to imagine any reasonable adult wanting kids to watch it in the first place.

Frankly, if I had children, I wouldn’t let Mary Poppins anywhere near them. She’s a deranged, deluded perky drug fiend with pretty freckles. Sort of like Lindsay Lohan. 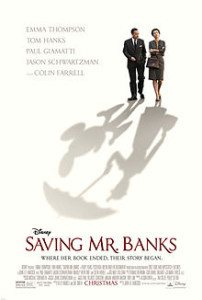 I went into Mary Poppins knowing only the basics. I knew it concerned a magical nanny who sang songs. I knew that Dick Van Dyke’s attempt at faking an accent is still mocked as one of the worst ever. I knew — from trailers for Saving Mr. Banks — that the story was about how Mary Poppins saved the Banks family patriarch, not the chilluns.

I also knew that the world adores Mary Poppins and Julie Andrews and chim-chimneys. Shouldn’t I as well? Who cares if I’m 30 years older than the target audience?

I may be curmudgeonly but I like kids’ films. And this one has a respectable pedigree.

Mary Poppins is based on a popular series of books written by Pamela Lyndon Travers, the first published in 1934 and the last in 1988. The beloved books tell of a stern nanny who uses her magical talents to bring the Banks family together.

In many ways, that’s the story of the film as well, just it’s been rubbed vigorously with Disney commercialism. For example, the nanny is not so stern in the film. She’s also younger and cuter. 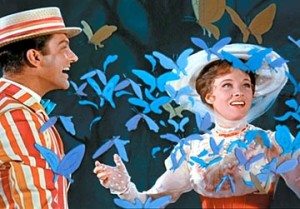 I haven’t been this high since Jerry died

I hadn’t seen a Dick Van Dyke film since I was a boy, and I’d forgotten how talented he is.

Van Dyke’s character Bert is far and away the best thing about Mary Poppins. His malleable face, his gallumphing manner, his endearing expressions: these make him the object of easy affection. He is the father that the Banks children — Jane (Karen Dotrice) and Michael (Matthew Garber) — dream of. He is probably the father most of the children who watched the film want as well. He’s a one-man miracle, that Bert, hooked into wonder without being showy or self-satisfied. Bert is also the only character with any real wisdom — not Mary Poppins. 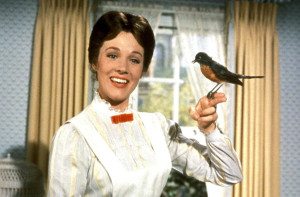 What’s that mechanical robin? Kill the children? I hear and I obey.

If you think that Mary Poppins saves anyone or fixes anything in Mary Poppins, maybe you better watch the film again. It’s shocking to say, but nonetheless true. In Walt Disney’s film, Mary Poppins is magical and adorable and surprising but concurrently useless.

Here’s what really happens in the picture in case your memory has fogged with age:

In Edwardian London, Mr. and Mrs. Banks neglect their progeny. The Mister (David Tomlinson) does so to focus on his work as a banker. The Mesdames (Glynis Johns) is a full-time Suffragette. Both have flimsy excuses for completely avoiding their family obligations, but that’s hardly relevant in a story about family unity, so don’t expect them to face any real scrutiny for it.

In any case, their nanny quits because Jane and Michael — young children of indeterminate age — keep running off. They are “bad,” although they are never shown doing anything even remotely bad in the film.

And by never, I mean never. They chase off after a kite in the beginning and are escorted home by a kindly policeman, but how did that happen? What kind of dreadful nanny loses two children (four times in one week!) and then just comes home without them to quit? We are told that the children are bad, and that’s that. Trust Uncle Walt on this one. He knows bad kids. They’re the ones who don’t beg their parents for more Disney-branded princess merchandise.

Also, I’m here to teach you about humility.

To save the day, Mary Poppins descends via flying umbrella and accepts a job as nanny until the wind changes. Way to instill the children with the importance of sticking to commitments, Mary. She impresses them with magic and they go off on adventures with her and Bert. These adventures feature singing and dancing and animated characters. They are full of whimsy and — for the mid ’60s at least — bravura special effects.

Here are the lessons these adventures teach the Banks kids:

These adventures, to be sure, are amusing and entertaining if a bit showy and long. As a child in the 1960s, I bet watching Mary Poppins was as mind-blowing as watching Time Bandits was in the 1980s. As an adult, however, the adventures add up to less than nothing. They are supercalifragilisticexpialidocious. Whatever lessons you glean from them are utter and precise nonsense. That’s unlike Time Bandits in the extreme. 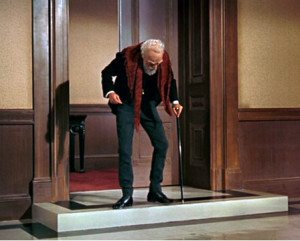 Towards the end of the film, Mary Poppins tricks Mr. Banks into taking his children with him to work at the bank. Dick Van Dyke plays a second role then as the elderly bank president, Mr. Dawes Sr., who forcefully tries to get little Michael to invest his tuppence (really only eight farthings or half a groat). Michael wants to spend his pennies on crumbs for pigeons, because Mary Poppins suggested he do so for reasons known only to her. Probably she gets a cut of the crumb money. Michael panics and flees with his half-groat and his sister, accidentally causing a run on the bank in the process.

Really Mary Poppins? This was your plan for re-uniting the Banks family?

Luckily Bert, now working as a chimney sweep, finds the kids down by the docks. He takes them home (because he’s the only character in the film with any responsibility or sense). Instead of freaking out that her kids were found on the night streets of London by an unknown laborer, Mrs. Banks immediately abandons them with Bert so she can go off and join a protest.

That is, by any estimation, exceptionally pathetic parenting.

Now, everybody, let’s try this at home!

Then, there’s a somewhat creepy dance number on the rooftops. Mary Poppins and the Banks children are entertained by a demonic mass of chimney sweeps who are attacked with cannon-launched fireworks simply because they resemble dark-skinned individuals. Another good lesson here, this time about the dangers of racial profiling. 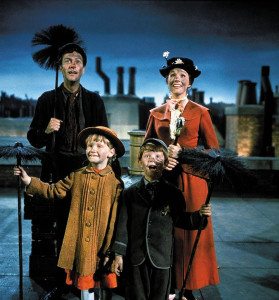 I wasn’t aware sweeping while Hottentot was a crime, officer.

Mr. Banks is humiliated and fired for the trouble he didn’t cause at the bank, but manages to say something meaningless in his defense: supercalifragilistic-expialidocious! Hooray! Good job, Mr. Banks!

Then he goes home and finally fixes his kids’ kite — something they requested of him at the beginning of the film. Getting scapegoated and fired was exactly the lesson Mr. B needed in order to recognize that his children deserve his attention. Or maybe it was Bert reminding him that while he does need to make money, if he doesn’t pay attention, his kids will be grown before he knows it? Hard to say.

The family then heads off to the park without saying goodbye to Mary Poppins or hello to Bert, who’s now selling kites. While larking in the park — their first moment of family leisure time presumably ever — they bump into Mr. Banks’ colleagues from the bank who say that the old Mr. Dawes died laughing from the joke Mr. Banks told. His position is now open! Forget that we just fired you, that you’re responsible for the old man’s death, and that you just learned how relatively unimportant work is, come back to the bank! Right now! 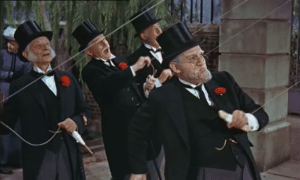 I think this was also the Fed’s reaction to our financial crisis.

So there’s another important lesson to learn kids: lessons rarely stay learned when they don’t make any sense in the first place.

Mary Poppins flies away and the Banks family doesn’t even notice. Nor do they give Bert the time of day despite his being solely responsible for saving the children and advising Mr Banks. Bert, on the other hand, does say goodbye to Mary, proving once again that he’s the only decent chap around.

So I’m not exaggerating, right? It’s an odd film. The parents are horribly disconnected from their children, particularly the Mesdames, whose political agitating hardly excuses her complete lack of time for Michael and Jane. She is never even questioned for her ubiquitous absences. She also never once so much as even speaks to Mary Poppins. Not a word. The kids are bored and neglected, but according to the film, that means they’re bad. Mary Poppins is excellent at entertaining the kids, but shows little concern for their actual welfare. I have no idea how I’m supposed to take the whole incident at the bank, but it’s hard to see it in a good light. Either Mary foresaw the cycle of Mr. Banks’ unemployment and re-employment with her magic and thought having his kids get him fired briefly was the best way for them to connect or she was busy tripping balls in one of Bert’s chalk painting worlds on her extra day off and didn’t care what happened. 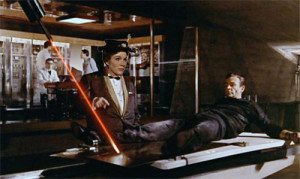 No, Mr. Bond. I expect you to feed pigeons.

Mary Poppins made more money in 1965 than any other film. The second biggest hit that year was The Sound of Music, also starring Julie Andrews as a savior nanny. The third biggest box office success was Goldfinger, which just beat out My Fair Lady for the bronze. Go figure. I bet Sean Connery has been having fantasies about being dominated by two freckly, god-sent nannies ever since.

As an adult, it’s hard to watch Mary Poppins and not wonder what the hell those involved were thinking. Some of its strangeness can be attributed to changing times, I guess. Still, it’s almost entirely without substance. Most of it is fun to look at but painful to think about.

You should probably show your kids Breaking Bad instead. That’s full of good lessons for children.

7 responses on “Supercalifragilisticexpialidociously Strange: Watching Mary Poppins as an Adult”