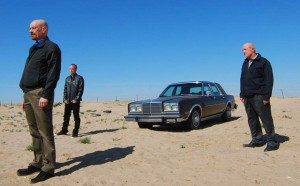 I stopped rooting for Walt at the end of season 4 when I learned he’d poisoned Brock. Prior to that, as awful as he could be, Walt was complicated enough to remain sympathetic. It took until episode 7 of season 5 for me to actively hate him. Why? Because of how he kills Mike, or more exactly, why he kills Mike. Why does he kill him? Purely out of peevishness. Mike calls out Walt on all his ego-driven bullshit. So Walt shoots him. Mike poses no threat to him. He’s leaving, for good. But he makes the mistake of telling god himself the obvious: that it’s his fault everything went to shit. Walt doesn’t like hearing it. And that’s all it takes. How can you not hate Walt after that? 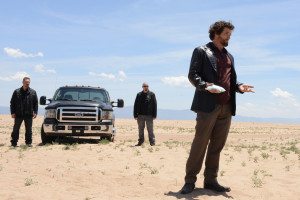 Backing up, the episode opens with Mike, Jesse, and Walt meeting Declan in the desert. Walt had a plan. What is it? It’s to be the godlike badass he believes himself to be. He tells Declan the methylamine isn’t for sale. He offers to cook and to turn over distribution to Declan. At first Declan can’t believe he’s hearing this line of crap. But Walt sells him on the purity of his meth, and the money it will bring in. Finally Walt says he was the one who killed Gus, and that Declan knows exactly who he is. “Say my name,” says Walt. Declan says it. “Heisenberg.” The deal is done. Mike gets his $5 million, a down payment, and off they go. Jesse asks about his money, but Walt says they’ll work it all out.

Mike’s lawyer, not Saul, brings money to a bank and distributes it into the safety deposit boxes of the nine guys in prison for their families to collect, plus money for Mike’s granddaughter Kaylee.

Mike prepares to skip town. Throws away his laptop and most of his weapons. Leaves a bag of money, passports, a gun, etc. in a car he parks at the airport. 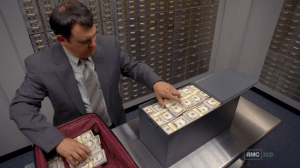 Say goodbye to all of that beautiful money

Hank and the DEA raids Mike’s house with a warrant. They find nothing. Hank is later chewed out by his boss for wasting time and money on a case that’s dead. No more suveilling Mike, he’s told. Hank tells Gomez to check out the lawyer. Which he does, and nabs him at the bank.

At the pest control office, Walt goes about organizing lab equipment when Jesse comes over. Walt acts like Jesse’s going to join him. But Jesse wants out. He’s just there for his money. We then get a wonderful scene where Walt goes through every tactic he’s ever used with Jesse to try to convince him to stay, seven specific tactics in a row, each of which fails to change Jesse’s mind:

Nothing works. Jesse says forget the money, but “It’s on you.” He leaves.

Walt gets himself a new assistant: Todd. Who, as Walt asks, applies himself to learning the cook. Todd is very conscientious.

Walt heads back to Hank’s office, again sobbing about Skyler, who is indeed ignoring him. Hank goes for coffee, Walt takes the bugs off the photo and the computer, but when Hank returns, Gomez takes him aside. Walt overhears Gomez say they got the lawyer and that somebody flipped.

Mike in a playground watching Kaylee on the swings. His lawyer calls, asks suspiciously where Mike is. Then Walt calls and says they’re coming for him. Cop cars pull up at the park. Mike watches them, watches Kaylee. He has to leave her. 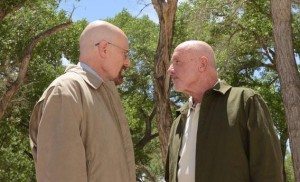 Walt and Jesse meet with Saul to discuss options when Mike calls. He needs the bag from the trunk of his car. Walt volunteers to deliver it.

Walt meets Mike by a river. Walt wants the names of the 9 guys. Mike won’t tell him. At which point Mike digs into Walt for his pride and ego destroying the good thing they had with Gus. If only Walt had stuck to cooking, none of this would have happened. Mike gets in his car. Walt heads back to his car—then turns around, pulls out Mike’s gun (that he took from the bag) and shoots Mike. Mike manages to get down to the riverside, the setting sun reflected in its waters.

Walt comes up to him. Says he’s sorry. He just realized he can get the names from Lydia. Mike cuts him off. “Let me die in peace.” Mike keels over, dead. 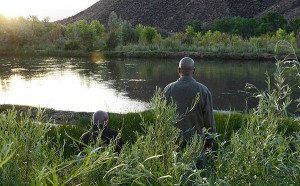 If we ever doubted the depths to which Walt would sink, we see it here, clear as day. First Gus, now Mike. At least Gus was going to kill Walt. Mike just wanted to leave and never see him again. Alas, he made the mistake of pointing out how full of shit Walt is.

In terms of each episode of season 5 focusing on a problem to be solved, the problem for Walt in this episode is Mike. At least in Walt’s head it is.

The problem in episode 8 is the 9 guys in jail who, with no money coming in, are going to spill their guts to Hank.

The episode opens with Walt in the pest control office, staring at a fly. The fly from episode 10 of season 3 fame is back. Or did it never go away? Todd arrives. They need to melt Mike’s body in a barrel. Looking at the body, Walt says he doesn’t want to talk about it. “It had to be done,” is all he says. Jesse comes by and asks after Mike. Walt implies that Mike left town. Walt will handle the 9 guys.

As Walt takes a shower at home, we see the Walt Whitman book sitting on the back of the toilet.

Walt, wearing his Heisenberg hat, meets Lydia in a café. She won’t cough up the names just yet. She’s worried Walt will kill her. He mocks her. He’d kill her right here? In public? She has a deal to make. She wants to expand their business into the Czech Republic, where meth use is rampant. Through Madrigal, she can ship it with ease. Gus was going to go for it before he died. Walt agrees. She gives him the names and leaves. Walt picks his hat up off the table. Underneath it is the ricin capsule.

At home, he puts the ricin back behind the outlet plate. 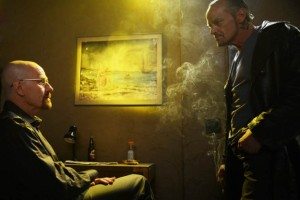 The return of the painting. Does Walt still dream of rowing away from it all?

Walt meets with Todd’s uncle and two of his guys, all three of whom are tattooed ex-cons with prison connections. They meet in a motel room. On the wall is the very same painting of a family watching a man rowing away in a boat that Walt couldn’t stop staring at in the hospital in episode 3 of season 2. Walt stares at it here, too, wondering aloud where these paintings come from.

But they’re here to talk about hitting all 9 guys in three separate prisons during the same two minutes. It can be done, says Walt. That’s what I’m paying you for.

Following which is a montage of the 9 being knifed and otherwise taken out, culminating with Dennis, who’s set on fire. 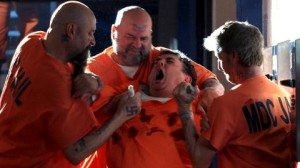 not a good day to be in jail

Walt visits with Holly at Hank and Marie’s. Hank comes home, totally vacant, pours them drinks. We know his investigation is dead along with those 9 guys. Hank talks about a summer job he had when young tagging trees in a forest. He hated it then, but thinks about it now more and more. Maybe it wasn’t so bad after all. Better than chasing after monsters.

Following this is a long montage of meth cooking, money counting, and distribution in the U.S. and in planes to the Czech Republic, all to the strains of “Crystal Blue Persuasion” by Tommy James & The Shondells. They must have been sitting on this track for years waiting for the right spot to use it. Everything goes like clockwork. The montage ends with Walt sitting at home, tired out from another hard day’s work. It’s just a job now. 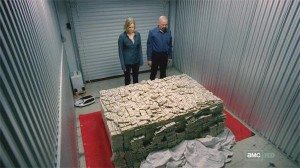 Skyler seems relatively happy one day with Marie. Marie suggests to Skyler that she bring the kids home now. It’s been three months.

Skyler brings Walt to a storage facility in which sits a massive pile of cash. So much she has no idea what it adds up to. More than they could spend in ten lifetimes. “How much is enough?” she asks.

At the hospital for another cancer scan. Afterwards, in the bathroom, Walt takes a long look at the dented towel dispenser he punched after learning his cancer had gone into remission in episode 9 of season 2.

Walt goes to Jesse’s house. Jesse is nervous to see him. They reminisce about their screwy RV for a bit, then Walt leaves, but says he brought something for Jesse. Jesse hauls in two duffel bags full of cash. 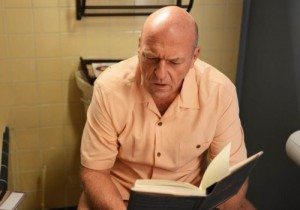 dedicated to you, Hank

Finally we cut to an afternoon pool party with all the family there, and they’re all happy, even Skyler. They talk of insignificant things. Hank goes to the bathroom. Sits on the toilet. Looks for reading material, finds the Walt Whitman book. Flips though it until seeing the dedication, to the “other W.W.” from “G.B.” A brief flashback to the scene in episode 4 of season 4 where Hank looked over Gale’s labnotes with Walt and jokingly proposed that W.W. stood for Walter White. “You got me,” says Walt.

At long last, he does.

It’s a smart ending to this first half. I figured Walt’s megolomania would destroy everything, but destructive as it was, Walt powered through on pure ego to make his business the success he knew it could be. Everything worked. For three months he made untold riches, to the point where, finally, he was done with meth. He did what he set out to do. He made more than enough money to see his family through, and brought them back together. Now he’s out. It’s over. His crazy excursion into meth making is a success.

Except for one thing. His ego allowed him to keep the Whitman book from Gale. Who he strangely remembers only fondly, this nice chemist he had murdered. 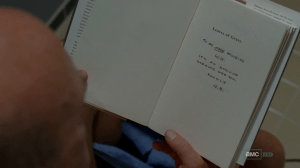 Walt flees to New Hampshire. We know that much. Maybe to protect his family he runs from Hank? Vince Gilligan has said only that Walt is returning with the M60 machine gun to save someone. I’m going to assume that someone is Jesse. Is that the way Walt finds some small measure of redemption? By saving Jesse? I wouldn’t be surprised.

What about the ricin? Someone’s going to die from it. Will it be Walt? Does he use it on himself? Perhaps the cancer comes back first, and then he does. It would be a fitting ending.

Then again, this show has a way of being consistently surprising. It does what the best drama does: it goes places you don’t expect, yet makes everything feel pre-ordained, as though it couldn’t have happened any other way.

I can’t wait for Sunday night… 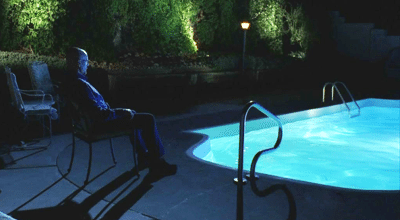 Walt peers into the abyss…