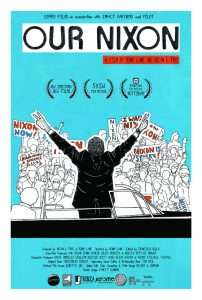 Nixon and Watergate. Best political scandal ever? It’s the gift that keeps on giving, to the point where every scandal since has had “gate” stuck on the end of it, which of course suggests that the original one had something to do with, I don’t know, spiking the Democrats’s office water cooler with LSD? Watergate! Democrats on drugs! Fighting off giant, lizard-beast Republicans with swords and flaming arrows! Or was that a separate incident covered by Hunter S. Thompson?

Meanwhile, three of the prime Watergate villains, aside from Nixon himself, were chief of staff H.R. “Bob” Haldeman, domestic affairs advisor John Erlichman, and special assistant Dwight Chapin, all three of whom, it turns out, were avid home filmmakers, taking their super-8 cameras everywhere they went and shooting hours upon hours of film, all of which were confiscated by the FBI during the Watergate investigation and locked away from human (and lizard-beast) eyes ever since. 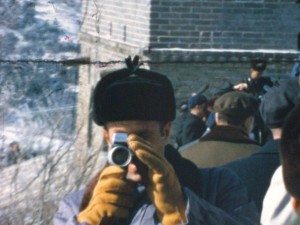 Until now! Or sort of now. The film has been available in the National Archives for something like a decade, but apparently it took some $20,000 to make copies such that one could watch it. And who would pay for that?

Visually, Our Nixon, a new documentary by director Penny Lane (probably best not to mention The Beatles to her), who coughed up the money with her co-producer Brain Frye, consists almost entirely of those home movies, intercut with news reports from the time, and later televised interviews with Haldeman, Erlichman, and Chapin. There’s no narration, only the voices of the three principals, along with carefully selected portions of Nixon’s infamous tapes, all of which are, as you know if you’ve ever heard any of them, equal parts hilarious and awful. 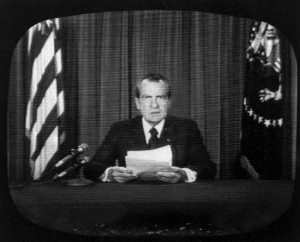 Nixon knocks another speech out of the park.

We get all sorts of “backstage” film of Nixon in China and elsewhere, but what’s best is the footage of the three guys doing the filming. For the most part, they’re all having a great time. They hang out with their families, frolic on the beach, and, essentially, hold Nixon’s hand. What we get are men thought purely evil at the time humanized. After all, what did they do aside from support a corrupt, sneaky, blinkered, too-smart-for-his-own-good, scheming, lying president? It’s not like they authorized and supported a war based on lies, instituted a torture regime, and openly broke the law to spy on all American citizens. The guys who did that never spent a day in jail. 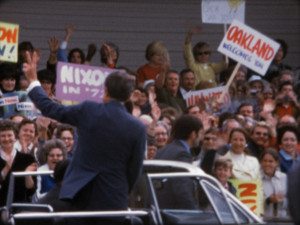 Having a working knowledge of Nixon’s presidency is something of a must for the film. Our Nixon doesn’t linger on details. It moves smoothly from his first inauguration to Vietnam to China to the second inauguration to Watergate to the ignominious end, hitting all the moments, but obliquely, through the real-time views of Nixon’s three main guys, along with their after-the-fact reassessments of what went down. Erlichman and Chapin come off pretty well in their later interiews (Chapin in ’07 and Erlichman in ’80). They at least have some perspective, though Erlichman remains convinced Nixon never knew about any wrongdoing in advance. 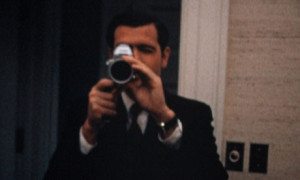 Haldeman filming…or is that Chapin?

Haldeman, on the other hand, in a ’78 interview with Phil Donahue, could not look more stiff or uncomfortable. It’s clear by the way he answers, even when allowing for wrongdoing having been done, that he doesn’t think he did anything wrong himself.

It’s a strangely funny movie. In part because it happened so long ago, at least in political time, and in part because of what’s on-screen. All the footage seems so innocent. When Haldeman is interviewed in ’71 saying he thinks the Nixon presidency will be remembered as one of the greats, all you can do is laugh, and feel at least a tiny bit sad for a guy who’s life is soon to be ruined. 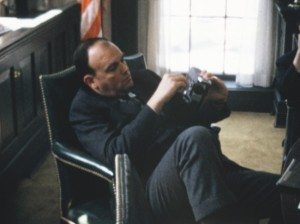 The opening credits sequence is highly silly, presented like a ’60 TV show with appropriately bouncy music. This contrasts nicely with, later in the film, Nixon, on tape, carping about All In The Family promoting homosexual values, and thereby destroying America.

One amazing scene takes place at what appears to be a small, black-tie event, where Nixon, on stage, announces that the music they are about to hear is “square,” because square music is what he likes to hear. The crowd laughs and applauds, Nixon takes his seat, and about 20 members of an a cappella group, dressed in tuxes and gowns, take their places on stage. One young woman then unfurls a small sign reading “STOP THE KILLING,” briefly behooves Nixon, as a Christian who loves Jesus, to stop killing children and to get out of Vietnam, and concludes with “God bless Daniel Ellsberg.” The conductor gently pulls her sign away, raises his baton, and the group launches into the squarest old-timey happy song you could ever dream up. Talk about awkward.

The movie doesn’t go deep. It skates along the surface, but it does so in a way that’s oddly revealing. In short, it works. It may not be aiming high. In fact it’s sort of aiming sideways, let’s say. You didn’t even know there was a target there to shoot at, but Our Nixon hits it. 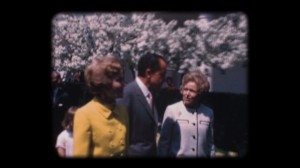 Nixon in the good times